The Global Positioning System, or GPS for short, is a satellite-based navigation system operated by the United States Department of Defense. The system provides extremely accurate positions, times, elevations, and speeds to both civilian and military users. The system utilizes between twenty-four and thirty-two satellites that emit microwave signals to the user’s GPS receiver, giving an accurate position almost anywhere on the globe.

At least four satellites are required to calculate the user’s position. Even though there are about thirty satellites active at any one time, the receiver cannot acquire a signal from a satellite that is below the horizon. The GPS receiver, which is usually small enough to be a hand-held device, works by carefully timing the signals projected by GPS satellites in orbit around the planet. When a signal is received, the receiver does a series of calculations to give a precise longitudinal and latitudinal coordinate to the user. This greatly aids the user for navigational purposes.

While GPS devices are very common and extremely precise in the civilian world, there is a certain degree of inaccuracy that is factored into the system. The system is run by the United States military, which employs GPS on many of its aircraft, soldiers, and precision-guided munitions. Because GPS receivers are very affordable today, it was deemed a security risk to have such a precise device available to enemies of the U.S. Therefore, the civilian version of GPS is not as fully accurate as the military version, but is still capable of very precise positioning within a few meters of the actual location.

Although the first satellite navigation systems began in 1960, the system used today was created shortly after 1983 after Korean Airlines Flight 007 was shot down for accidentally straying into the former Soviet Union’s airspace. President Ronald Reagan devised the idea that a Global Positioning System should be readily available to all civilian vessels so that accidents like Korean Airlines Flight 007 do not happen again.

GPS has since been enhanced and tuned for affordable civilian use and has become popular in both standard and aftermarket units available in all sorts of transportation machinery, from automobiles to ships and aircraft. 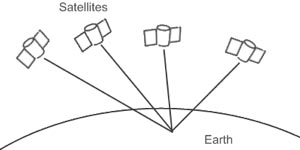