Paramount Business Jets provides the safest private jets at the best prices for all private aircraft charter services to and from Van Nuys Airport.

Private jets available for charter to and from Van Nuys Airport include the Citation CJ2 light jet, the Hawker 800A midsize jet, the Challenger 605 and Gulfstream GIV large jets and the Global Express XRS ultra long range jet.

Private Jet Charter to and from Van Nuys Airport

There’s a reason Van Nuys Airport is among the five busiest – many years in the Number 1 slot – general aviation airports in the world.

People like to fly here. Tucked away on 730 acres in the heart of California’s San Fernando Valley, Van Nuys is a convenient and discreet gateway into and out of the West Coast for celebrities and VIPs.

It allows A-list travelers to hire private jets and arrive and depart in total privacy. A private entrance allows vehicles to drive directly to an aircraft to pick up or drop off passengers out of the public eye.

And, despite the lack of human eyes, there are scores of electronic eyes – almost 100 security cameras – that keep close watch on the place and the luxury planes that park there. 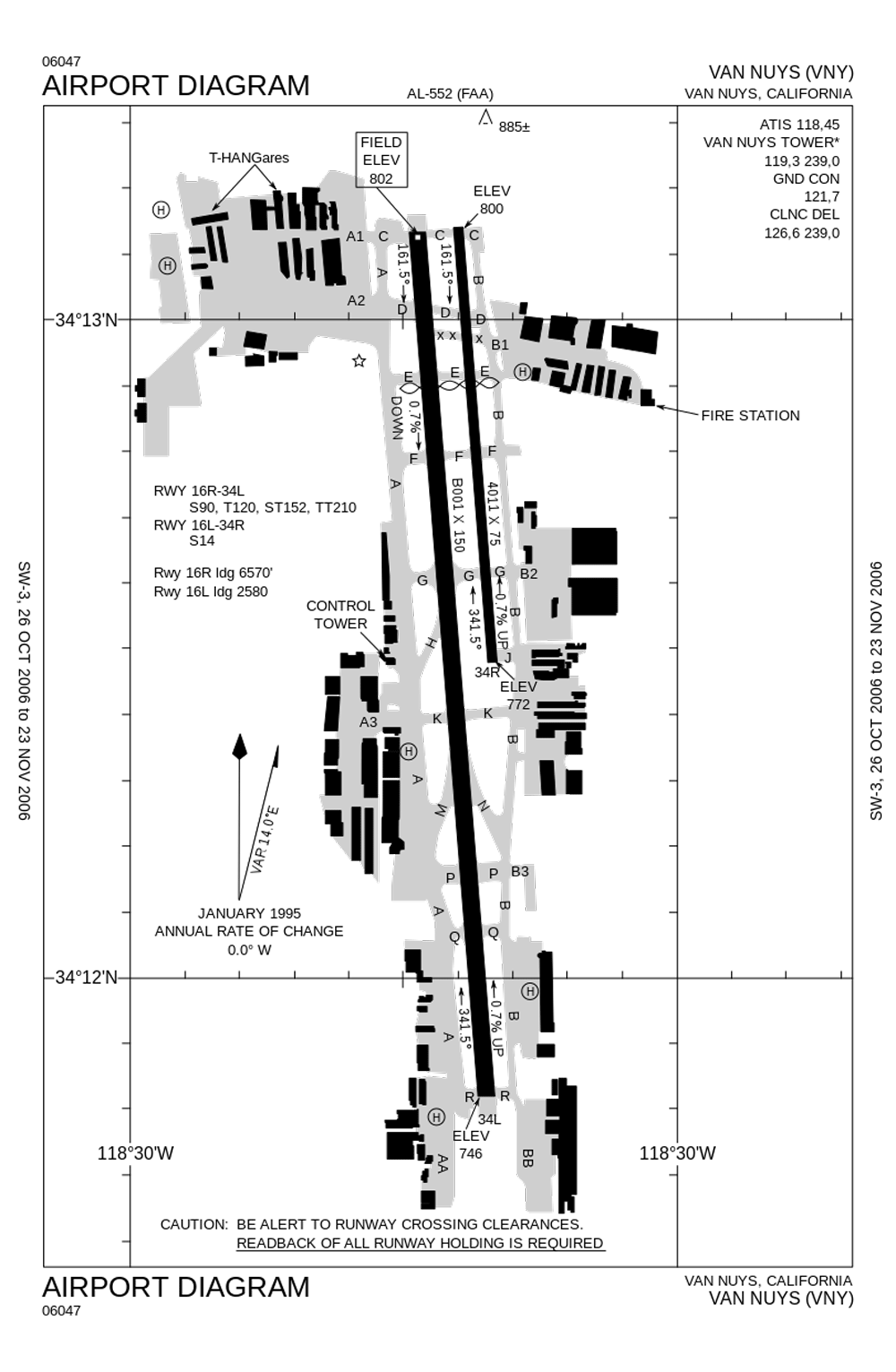 What is Van Nuys Airport code?

Why rent a jet at Van Nuys?

VNY and Los Angeles International (LAX) are both owned by Los Angeles World Airports (LAWA), a self-supporting city department. It’s run by a board of commissioners.

VNY has two parallel runways – one with full instrument landing system – and a FAA tower. The main runway is 8,000 feet long, the other, a training runway, is 4,000 feet long. Van Nuys can accommodate any rented charter jet. In fact, more than 700 non-commercial planes and jets take off daily.

You will be among the rich and famous – including Barack Obama, Justin Bieber, and Rihanna – who have used the airport.

On Dec. 17, 1928, the 25th anniversary of the Wright Brothers’ first flight, a group of businessmen opened what would become Van Nuys Airport.

Metropolitan Airport was an 80-acre airport in the middle of peach orchards and walnut groves in San Fernando Valley. It was a place for experimentation in flight and used by famous early aviators like Amelia Earhart to set speed records.

Metropolitan Airport was a far cry from today’s 730-acre Van Nuys Airport that handles some 220,000 business, private, corporate and government jets a year. It’s a reliever airport that reduces traffic around commercial airports like Los Angeles International (LAX), making them safer and more efficient. More than 100 businesses have grown up around VNY, including four fixed base operators, Castle & Cooke, Clay Lacy, Jet and Signature aviation. Jet services are available from the FBOs and other businesses at the airport that do repairs and other aviation activities.

According to the airport’s website, an economic study shows that Van Nuys Airport contributes about $1.3 billion annually to the Southern California economy and supports more than 12,300 jobs.

The Wall Street Journal studied thousands of private aircraft flights between 2007 and 2011. It found that the flight from Van Nuys Airport to New Jersey’s Teterboro Airport, another of the world’s busiest general aviation airports, is especially popular among celebrities and corporate types because Van Nuys is close to West L.A. and Teterboro is close to Manhattan. Companies that have made that run many times include Paramount Pictures, companies owned by Hard Rock founder Peter Morton and Guitar Center.

Van Nuys is not only an airport used by flying celebrities, it has also been a popular location for filming since the 1930s when Dean Daily, a former cameraman, saw it as a way to make money for his grandmother and then-airport owner, Drusilla Daily Warner. (He also grew banana squash around the airport to make money to make ends meet.)

When the Great Depression nearly closed the airport, Hollywood film production saved it.

You’ll find scenes of Van Nuys Airport in these movies:

And then there was Marilyn

In 1945, a woman named Norma Jeane (Baker) Dougherty was working on the airport grounds on an assembly line at Radioplane Company, which manufactured drones for the U.S. Army during World War II. A photographer was sent to the plant to shoot photos for a story in Yank Army Weekly Magazine about female workers in the war effort.

That photo made her famous. She changed her name to Marilyn Monroe and was given a screen test. Before overdosing in 1962 on barbiturates at age 35, she starred in 29 films and was married three times.

Land a private charter jet on “One Six Right”

In 1957, the name changed for the last time to Van Nuys Airport and the Sherman Way underpass was built to extend the main runway (the famed “One Six Right” to 8,000 feet.

“One Six Right” shows the passion that pilots have towards flying and the benefits that general aviation, including hired charter jets at VNY, bring. The movie showcases the ups and downs of Van Nuys airport, which is located 11 miles northwest of Hollywood.

The documentary film was made in 2005 by Brian Terwilliger, a producer and director, who spent five years making the movie named for the compass heading painted on the tarmac, “16R.” He was concerned about the future of general aviation, especially at Van Nuys.

In the film, the narrator says, “When pilots hear ‘one six right,’ they know they’re home.

“Every two weeks, an airport closes in the United States,” the narrator goes on to say.

While Van Nuys, the largest employer in the San Fernando Valley, is in no real danger of closing anytime soon, Terwilliger wanted to memorialize all the aviation firsts that have taken place there.

In the documentary, Terwilliger, who had learned to fly at Van Nuys, interviews many airplane lovers, including director Sydney Pollack.

Races and records and firsts

Men and women in their new-fangled flying machines were drawn to Van Nuys (Metropolitan Airport) in the early days of flight.

When Metropolitan Airport opened, it was run by Waldo Dean Waterman, a test pilot and engineer for a manufacturing company at the airport. Waterman held non-stop races to Cleveland, Ohio, and set many records, including a seven-day stay in the air in a plane that was able to be refueled mid-air.

In 1929, one of the first female pilots, Bobbi Trout, set an endurance record when she circled the airport for 12 hours, 11 minutes without refueling.

The P-80, America’s first fighter jet, had its test flights at the airport during World War II.

In 1965, National Guard pilots Clay Lacy and Jack Conroy flew a Learjet on a record-setting transcontinental round-trip flight from Van Nuys to New York and back.

The term “jet-setter” was coined when Frank Sinatra bought a Learjet to travel back and forth to Las Vegas and Palm Springs with Rat Pack buddies, Sammy Davis, Jr. and Dean Martin.

The B-2 stealth bomber was first shown to the public at the Van Nuys Airport Aviation Expo in 1996.

When it opened, biplane hangar fees were $35 per month and landing fees were 50 cents.

In 1929, when the stock market crashed and many airplane owners and aviation companies went broke, the airport remained open thanks to the money made by planes bringing in bootleg liquor from Mexico.

After the Japanese attack on Pearl Harbor on Dec. 7, 1941, the U.S. Army took over Metropolitan Airport. It bought land to nearly triple its size and paved and extended the runways to create Van Nuys Army Airfield where fighter pilots were trained.

In 1944, the U.S. Navy and Lockheed Corporation went together to build the Navy Lockheed Plant, a modification facility for aircraft.

After the war, the City of Los Angeles bought the airport for $1 as war surplus and renamed it San Fernando Valley Airport.

The 1950s brought substantial growth to general aviation at the airport and local industries.

In 1957, the name changed for the last time to Van Nuys Airport.

In 1959, the Sherman Way underpass, which allowed cars to go under the runway, was built, allowing the main runway to be extended from 6,000 to 8,000 feet, the famous “One Six Right.”

In the 1960s, aerospace companies began to locate at the airport and VNY was enlarged to meet their needs. The Van Nuys Golf Course was built at the south end of the airport in the late 1960s, and a new control tower was constructed that is still in use today.

In 1973 at the 10th Annual Van Nuys Airport Aviation Expo, the command module from Apollo 14 was on display.

In 1975, the FlyAway Bus Terminal opened to provide nonstop bus service to LAX.

In the 1980s, Bob Hope embarked from the airport on his last USO tour for American troops abroad.

Van Nuys is home to about 800 planes, ranging from corporate jets to puddle jumpers. You can fly your own plane or rent a private charter jet into Van Nuys Airport.

If you’ve ever visited Los Angeles, California, it will come as no surprise that Van Nuys Airport is one of the most popular airports for private jet charter.

From the Hollywood Walk of Fame to Disneyland and the Staples Center – the home of LA Lakers – there are countless things to do in and around Los Angeles. Not to mention, it’s home to some of America’s most well-known celebrities.

If you’re looking to join the long list of private flyers at Van Nuys Airport, we have just the thing for you. Check out the infographic below for a list of the top 10 destinations from Van Nuys Airport. It includes lots of useful information such as distances, times, and how much you can expect to pay.