Air Traffic Control is a service provided by the FAA to direct traffic on the ground and in the air. Observation and communication are provided by ground-based air traffic controllers, whose primary responsibility is to separate aircraft to prevent collisions, efficiently organize the flow of traffic, and provide information and support for pilots.

Separation is the term used to describe the prevention of aircraft collisions by using lateral, vertical, and longitudinal separation of aircraft. Secondary functions include providing pilots with relevant information, such as weather updates, navigation information, and Notices to Airmen (NOTAMs).

Airport control is conducted primarily through visual observations from the control tower. As stated earlier, air traffic controllers from the aerodrome or tower are responsible for the aircraft operating on the airport grounds and the surrounding air, frequently 2 to 5 nautical miles in radius. Available at these control towers are radar displays to locate and identify individual aircraft on a map. From the screen, the aircraft’s identification number, speed, heading, and other information can be obtained. The three general operational categories of airport control are ground control, air control, and clearance delivery. Ground control is held accountable for the management of aircraft in the airport's "maneuvering" areas. This includes taxiways, inactive runways, and holding areas. Any aircraft, vehicle, or person in this area is required to obtain clearance before engaging in any activities. Communication is clearly maintained via VHF radio. Air control is in charge of aircraft on active runways as the air control function of the Air Traffic Control clears an aircraft for take-off or landing. This function must make sure that runways are clear and that there are no unsafe conditions present. Finally, clearance delivery is the function that oversees the issuing of route clearances. Approach and departure control can also be categorized under airport control, as they handle the traffic within a 30 to 50 nautical mile radius of the control tower airport. 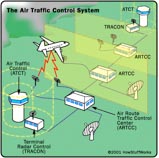