A hangar is an enclosed structure for housing aircraft. There is a disagreement as to where the term originally evolved, but most information points to the original German Zeppelin airships that were "hung" inside large barn-like buildings, which were nicknamed "hangars."

Most hangars are constructed like a barn, with a high ceiling to fit an airplane’s tail and wide doors to fit the wings or rotors. A large door can usually be rolled out of the way or lifted above the airplane to allow storage or to move the aircraft from the hangar. A light hangar is often constructed of wood or metal with a concrete or gravel floor, while larger aircraft hangars are assembled from reinforced concrete to bear the load of such a large building. Military hangars are typically reinforced with concrete to prevent damage to the aircraft in case of an explosion or attack.

Cutaway diagram of an Aircraft Hangar: 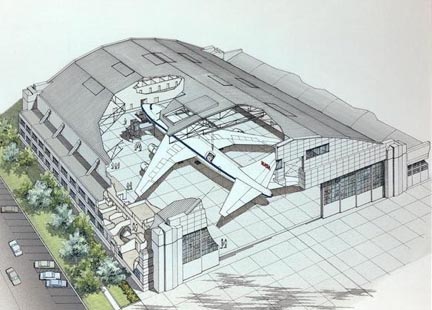