Paramount Business Jets provides the safest private jets at the best prices for all private aircraft charter services to and from Palm Beach International Airport.

Private jets available for charter to and from Palm Beach International Airport include the Pilatus PC12-NG and the King Air E90 turboprops, the Beechjet 400A and Citation Bravo light jets, the Falcon 50EX midsize jet and the Gulfstream GIV large jet.

Private Jet Charter to and from Palm Beach International Airport 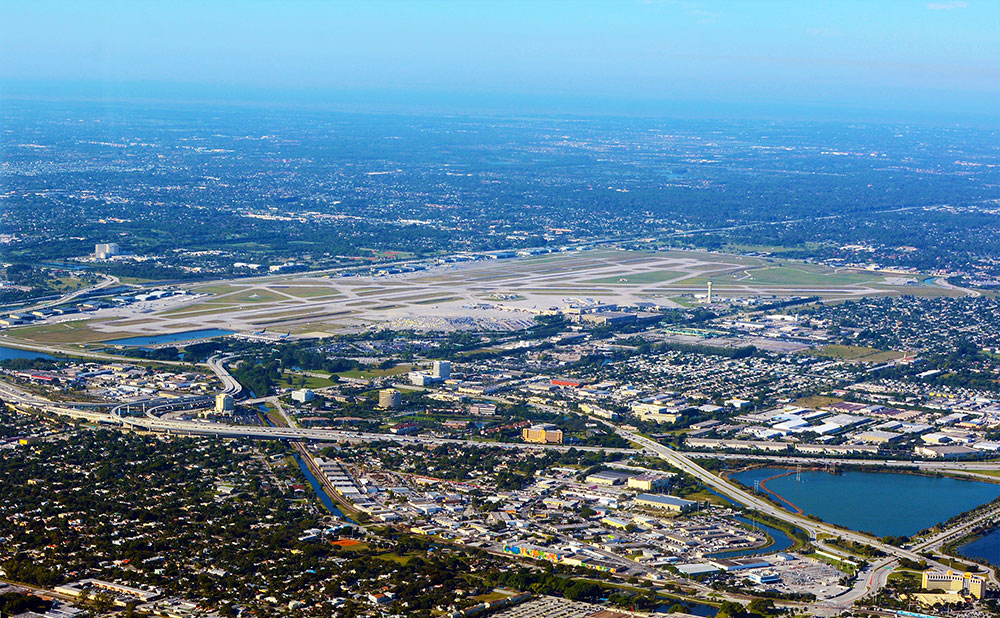 More than six million passengers fly into and out of Palm Beach International Airport every year on private jets and commercial flights. If you charter a private jet to PBI, there are three fixed-base operators to serve you. The airport offers customs and immigration services and has a 24-hour air traffic control tower.

Palm Beach, synonymous with luxury, is known for its beautiful beaches and draws tourists from all over the world.

The IATA airport code for Palm Beach International Airport is PBI; its ICAO code is KPBI.

The airport, which is close to several major highways, offers easy access to much of South Florida.

Palm Beach International Airport started off as Morrison Field in 1936.

It was named for Grace K. Morrison, a secretary to a Palm Beach architect and weekend flier. Morrison championed the planning and development of the air strip. Unfortunately, she was not there to see the dedication. She died in a car accident shortly before the airfield opened.

In 1937, the Palm Beach Aero Corporation got a lease for the property and built a terminal and hangars. That private operation only lasted three years.

In 1940, the airfield was turned over to the U.S. Army Air Force to be used during World War II. It was activated for military use and to train pilots by the U.S. Army Air Corps in 1941. It was deactivated in 1947 and renamed Palm Beach International Airport in 1948. It was reactivated again by the Air Force in 1951 during the Korean War but civil aviation continued on part of the airport.

The city of West Palm Beach was developed – as was much of the east coast of Florida – by industrialist Henry Flagler. He called the Palm Beach area “a veritable paradise” when he first landed there in 1893. He turned Palm Beach into a resort town and developed West Palm Beach on the other side of the intracoastal waterway for the workers.

The FBOs at PBI 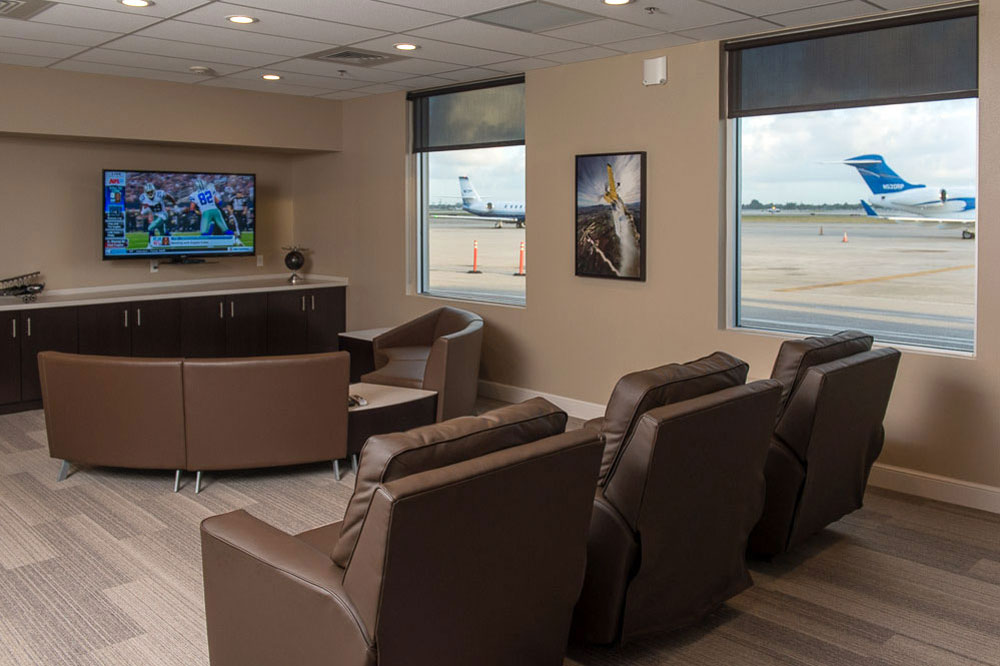 The amenities at Atlantic Aviation include: 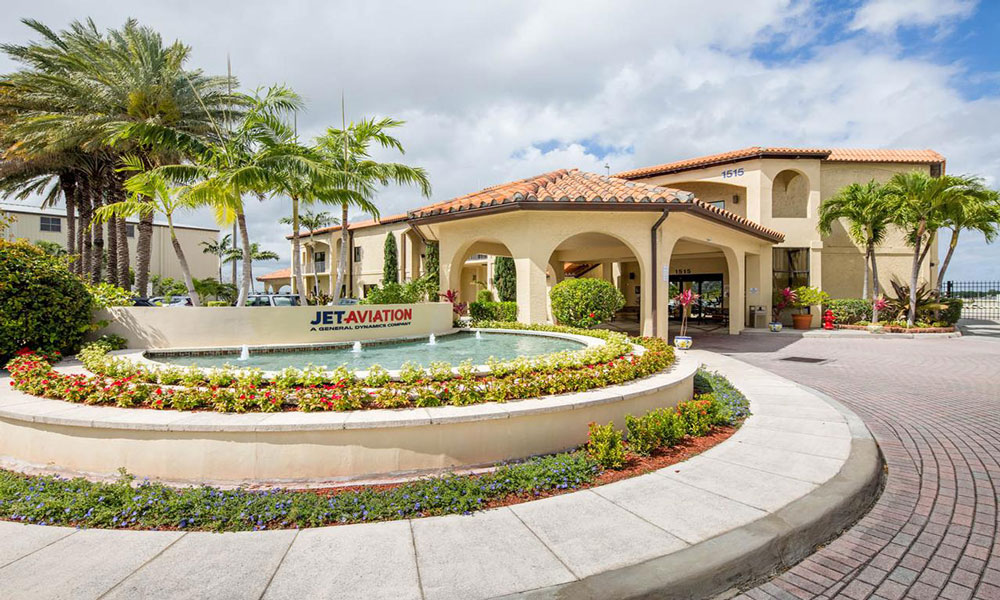 For almost three decades, Jet Aviation Palm Beach has been serving domestic and international flights and services that include cleaning, refueling and hangaring of private jets. Its executive terminal offers:

Among the services offered by Signature Flight Support at PBI are:

There is much to see and do around the Palm Beaches but some annual events seem to be custom-made for the discerning, elite traveler. Here are a few:

Art Palm Beach is South Florida’s largest and longest running mid-winter fair dedicated to contemporary, emerging, and modern 20th and 21st century works of art. The internationally known art fair will be celebrating its 22nd edition in 2019. It is held in January in the Palm Beach County Convention Center.

The International Polo Club Palm Beach, located in Wellington, 18 miles southwest of Palm Beach International Airport, is the premier polo destination in the world, hosting the largest field of high-goal teams and the most prestigious polo tournaments in the United States. Polo enthusiasts gallop to the polo club from December and April to watch the action. Polo matches are open to the public, with a wide range of hospitality and guest seating that includes elegant grandstand viewing, field tailgating, stadium seating, fieldside champagne brunches at The Pavilion and exclusive luxury boxes.

Fine art, jewelry and rare antiques from all over the world are on display at this show that claims to be the largest of its kind in the United States. More than 40,000 attended the 15th annual event in 2018 to see the displays and attend a series of lectures by experts in various fields. The weeklong event is held in February at the Palm Beach County Convention Center.

The PGA National Golf Club in Palm Beach Gardens has hosted the Honda Classic in late February/early March since 2007.

The PGA National has five courses with the Honda Classic being played on the Champion course, which was redesigned in 2014 and is now famous for a treacherous three-hole stretch designed by Jack Nicklaus, the only player to win the 46-year-old-tournament in back-to-back years. His nickname, the Golden Bear, lent its name to the challenging three-hole stretch called “The Bear Trap.”

Considered the most elite auto auction in Florida, Barrett-Jackson brings hundreds of cars worth millions of dollars to the South Florida Fairgrounds every April. More than 50,000 people attended the 2018 auction, one of four put on around the country by Barrett-Jackson. They are regarded by most auto enthusiasts as the world’s greatest car auctions. You may have seen them televised on the Discovery Channel but if you rent a private jet into PBI, you can see one of them in person – and maybe pick up the car of your dreams.

Florida’s leading industry is tourism, and it has been for some time. In 2017, the Sunshine State brought in no fewer than 88 million tourists. This can mean that commercial airlines are often very busy. And in turn, this makes private jet charter to the region very appealing.

Palm Beach International Airport (PBI) is one of two airports in Florida which makes our list of the top 10 most popular airports for private charter. Aside from Palm Beach itself, which is of course in very close proximity to the airport, Florida is also known for its excellent weather. Hidden springs, underwater caves, Disney World, the Miami Heat, local breweries, and Fort Lauderdale are just a few of Florida’s attractions. Not to mention 70% of the US’s oranges.

When planning your private jet trip to or from Palm Beach International, you may find it useful to view some common information on flights there. If you look below, you’ll see a helpful graphic with key information including the prices of common flights and the distance to a selection of other airports.