A waypoint is a 3-dimensional point in space and/or time in which a set of coordinates is defined. They are most commonly used for flight navigation. Waypoints started out as terrestrial markers like mountains or rivers, but with the advancements in aviation and GPS, they have become more abstract. Waypoints are used for a number of things, such as: approaches, departures, air-traffic control instructions, holding, navigating, and defining airspace and other areas of flight. The most important use of waypoints, though, must be navigation. Without a waypoint, navigation would be virtually impossible. How can you know where you are if everything you see is the same? Even before the advancement of electronics, waypoints have been used to navigate the ocean, search the jungles, and guide the bravest of travelers. Stars, rivers, and mountains are perhaps some of the oldest examples of waypoints.

On Earth, they are most commonly a point of longitude and latitude defined by a GPS system. They are used for developing invisible highways or routes through the sky to keep flight traffic in an orderly condition. Other than GPS, waypoints can be defined by using radio navigation or beacons and distance and/or time to define where a particular point in space is. For example, if you were navigating yourself from point A to point B using radio beacons at point A and point B and you had to be at an altitude crossing a halfway mark between the two, you would identify that halfway mark with a waypoint.

GPS operates with the help of at least four satellites orbiting the Earth. The first three satellites give the longitude and latitude, altitude, and time. The fourth satellite is used to verify that the time is correct. The distance between the satellites and the receiver on the plane is so far that it takes an average of 4 seconds at the speed of light for the signal to be sent from the satellite, received by the receiver, and sent back to the satellite. In those four seconds, the aircraft could be 100 or more feet off the target's position. The fourth satellite reads the time of the operating satellite and adjusts it to be accurate and predict where the aircraft will be when the receiver intercepts the signal. 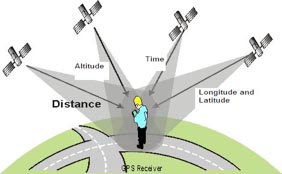 Waypoints become defined by altitude, latitude, and longitude. If you are navigating yourself through outer space as an astronaut, then you will use a fourth dimension, time. This is because an object that is supposed to be located at a particular coordinate may not be there due to the rotation of the earth and the stillness of space.