Charter a Private Jet to the Wimbledon

You, too, can fly into Wimbledon as celebrities and members of the royal family do: on a private jet or helicopter. Paramount Business Jets can arrange flights into and out of nearby airports for the two-week Wimbledon tournament, held in late June and early July at All England Lawn Tennis Club, six miles south of London’s Buckingham Palace.

Here are the airports that service the area and their distances from Wimbledon:

Booking early has many advantages. Enter a few details below to start planning your private jet flight to the Wimbledon.

A half million people flock to Wimbledon every year to watch the best tennis players from more than 60 countries bash the ball over the net on the world’s oldest court.

The only one of the four Grand Slam tournaments played on grass, Wimbledon is not only the world’s most prestigious tournament, it’s also considered the birthplace of tennis.

It is where, in 1873, British army officer and Welsh inventor Major Walter Clopton Wingfield got the idea of moving outdoors informal indoor ball-and-racket games and setting up some rules.

But Wingfield couldn’t have done it without help from Vulcan, the god of fire. For it was the chemical process of vulcanization that gave rubber balls the strength needed to bounce on a grass court instead of a hard surface.

And that bounce gave Wingfield the idea of lawn tennis.

He got a patent from Queen Victoria in 1874 for a “New and Improved Court for Playing the Ancient Game of Tennis” and began marketing his game by selling boxed sets that included rubber balls imported from Germany, nets, poles, rackets – and, most importantly, an instruction manual.

The sport caught on.

In 1875, the first game of lawn tennis was played at Wimbledon and the club changed its name to All England Croquet and Lawn Tennis Club. The first tournament for men was played there in 1877. Women began competing in 1884.

Eventually, croquet became such a minor sport that it was dropped from the name. Wimbledon’s site is now known simply as All England Lawn Tennis Club.

As many as 40,000 spectators a day watch the perfectly groomed 8-millimeter tall grass turn to mud and clay as 660 matches are played. One of the fields is equipped with tall fans on each end to dry out the surface in case of rain. 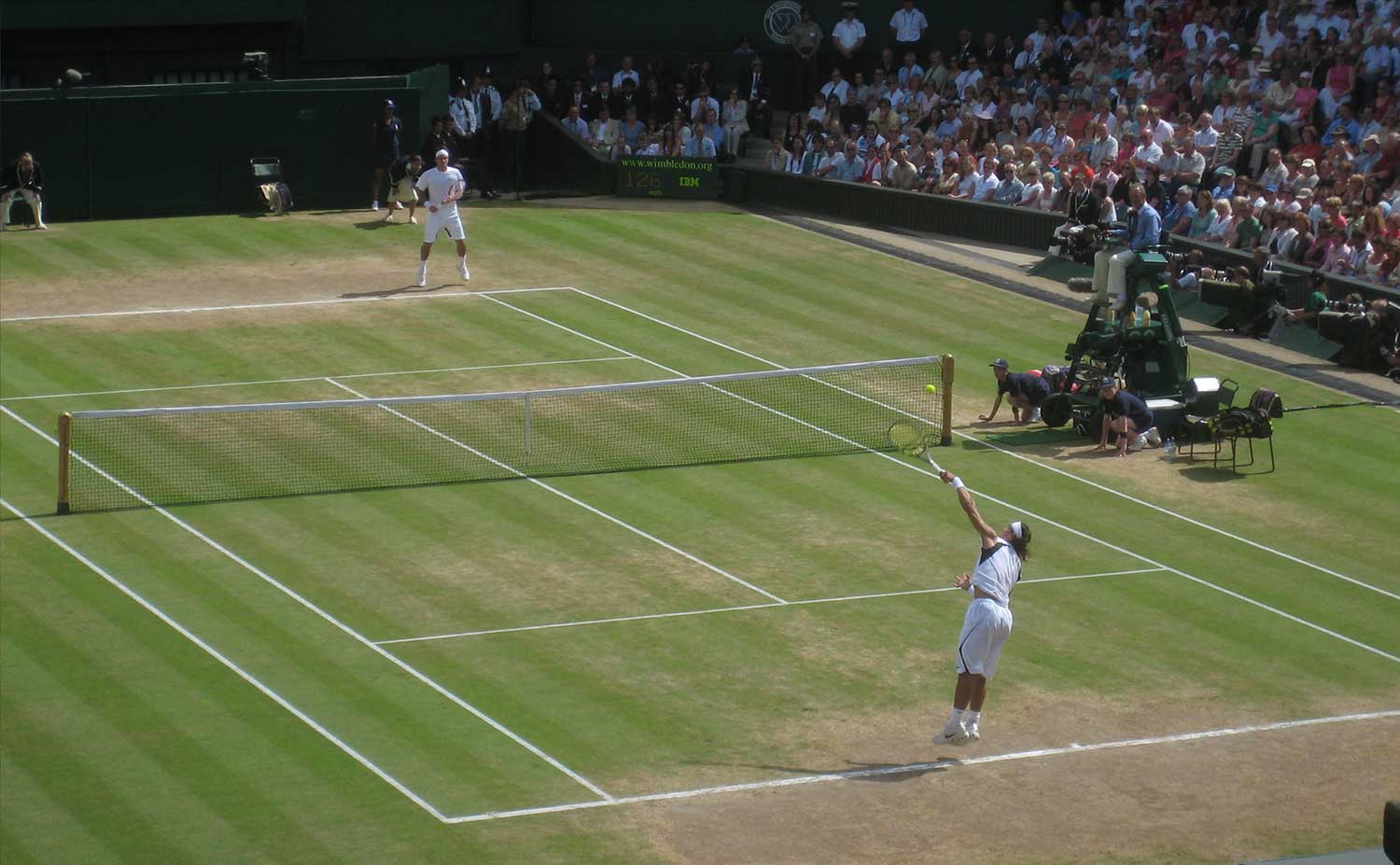 Roger Federer vs. Rafael Nadal at the 2006 Wimbledon Finals

While Wimbledon has kept the game’s grass roots, the other Grand Slam tournaments – the Australian, French and U.S. opens – use evolved surfaces of clay and hard court. The ball plays differently on each base.

There’s much more to see at Wimbledon than tennis. Celebrities and royalty can be spotted watching matches from the Center Court’s Royal Box. Spectators can often get a glimpse of the likes of Prince Harry, Kate Middleton, David and Victoria Beckham, Bradley Cooper and Camilla, Duchess of Cornwall.

And, if you’re thirsty, Pimm’s is an alcoholic beverage as famous at Wimbledon as mint juleps are at the Kentucky Derby. A gin-based liqueur with fruit juices and spices, Pimm’s is mixed with lemonade at Wimbledon.

And, if you are hungry, the tournament’s signature snack is strawberries and cream.

If you worry about staying safe, you’ll be comforted to know that there has been a military presence at Wimbledon since German bombs destroyed 1,200 of Center Court’s 14,000 seats during World War II. Each year, hundreds of military men and women volunteer to keep watch and help spectators.

Some fun facts about the tournament played on grass: