Paramount Business Jets provides the safest private jets at the best prices for all private aircraft charter services to and from London City Airport.

There is a wide variety of private jet types available for charter to and from London City Airport. The most popular private jet models include the Hawker 850XP, Challenger 350, Falcon 2000XL, Global 6000, Citation Mustang and the Gulfstream G-500.

London City Airport has a single 4,948-foot (1,508-meter) runway. Due to its steep approach and runway less than 5,000 feet, London City Airport limits its use to multi-engine, fixed-wing aircraft with crews certified to fly 5.5-degree approaches. (Standard is 3 degrees.)

London City Airport is London’s smallest airport and the one closest to the city and its two main financial districts, Royal Docks and Canary Wharf. It offers a wide range of airport amenities to its A-list business travelers. It has the best welcoming services and excellent shopping facilities.

Private Jet Charter to and from London City Airport

London City Airport is one of five airports in London but it’s the one that is closest to the city itself.

That makes it an ideal destination or departure point for private jets.

London City Airport is located seven miles from the center of London in the Royal Docks in the borough of Newham, three miles from Canary Wharf. 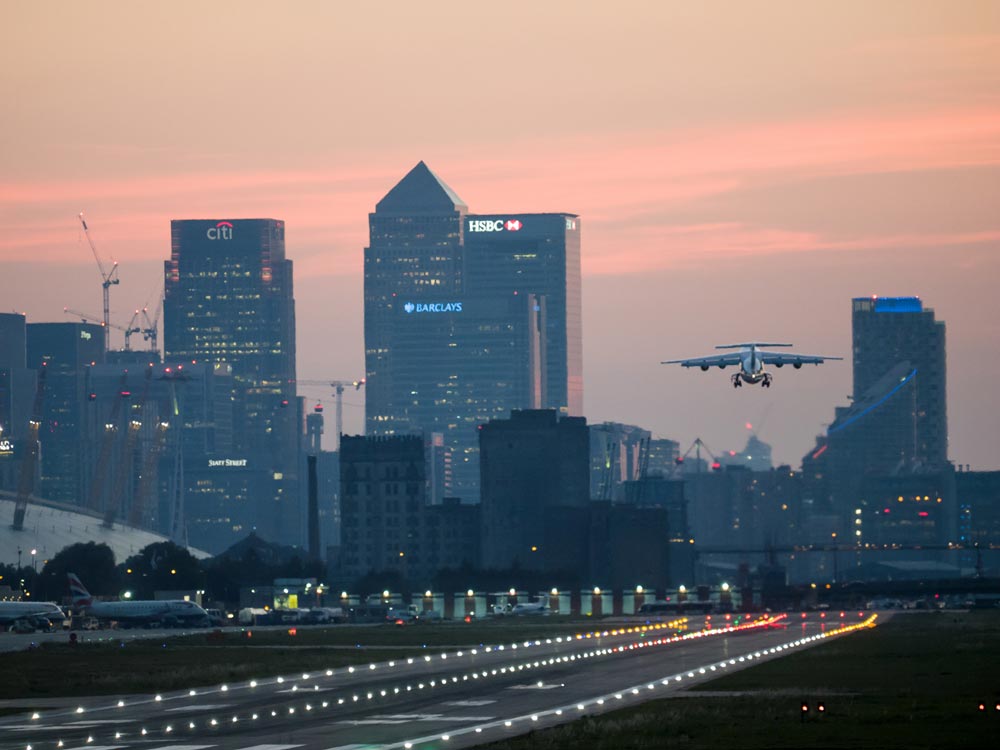 Many business travelers hire private jets into and out of London City because the two major financial centers of London are Royal Docks and Canary Wharf, which is three miles away. London City Airport handles most of those private jet travelers and the airport has a business feel to it.

The airport prides itself on being London’s fastest, most punctual and closest to downtown airport.

London City Airport requires additional crew training due to steep approach and the runway is also under 5000 ft long which limits the types of aircraft that can land there.

What is London City Airport’s code?

Is it easy to get to London City Airport?

London City Airport is one of the most accessible airports in London. It is a station on the Docklands Light Railway (DLR), the above-ground portion of the Tube. The DLR and the Tube will take you just about anywhere you want to go in London.

Why is London City Airport important for travelers on private jets?

In addition to its location near London’s financial centers, its size – the smallest of London’s five airports – makes it easier and quicker for private jets. There are fewer people and flights, eliminating much of the hassle of a larger airport. 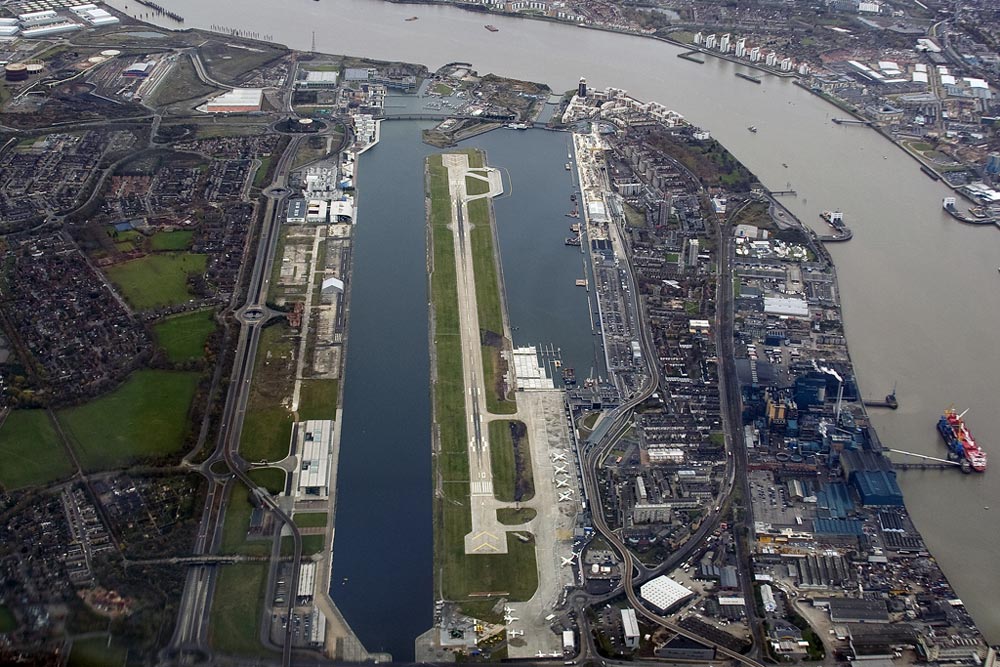 How many terminals and runways does London City Airport have?

A single runway, adjacent to a single terminal, handles most of the short-haul business flights to Europe. Very few long-distance flights – to the United States, for instance – take off from London City Airport.

What airlines use London City Airport?

How far is it from London City Airport to important destinations around the city?

By train, Tube or car, London City Airport is about:

What does it mean to be the world’s first Bloomberg Hub? 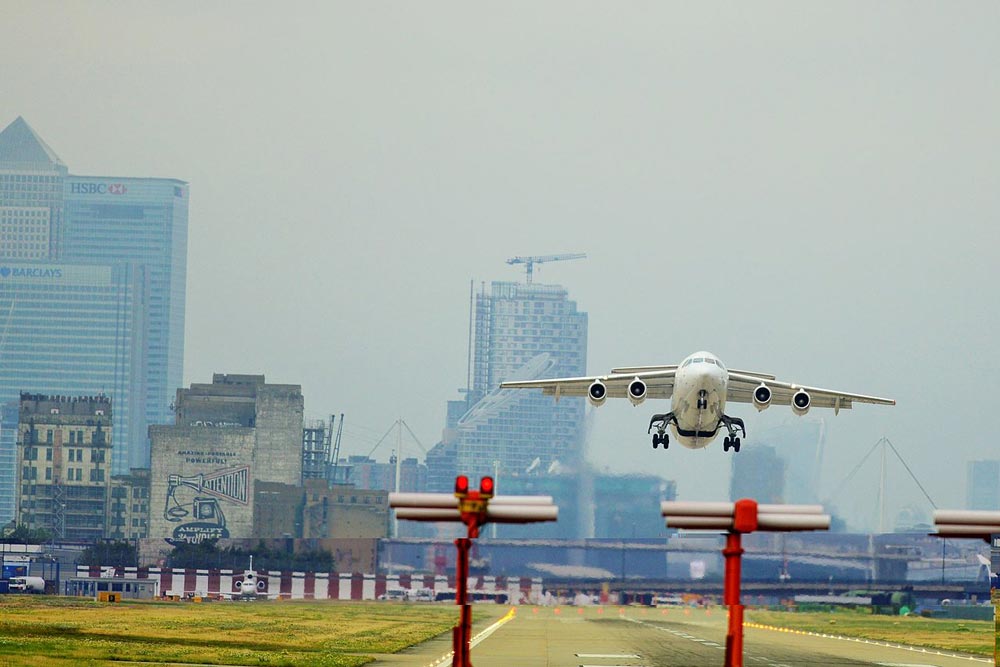 According to the Bloomberg Hub’s website, the journey is just a means to an end for business travelers who come to meet clients, make a sale, negotiate a deal or network at an industry conference. So, Bloomberg set about helping business travelers, most of whom hire private jets to get to London, to better prepare themselves for the business that awaits them. Even when waiting, business travelers are still working.

Bloomberg, attempting to serve the global community of business and financial decision-makers, said there were several reasons it chose London City Airport as its first international hub:

Bloomberg’s choice of London City Airport as its first hub is testimony to the airport’s importance in the world of business.

The Media Tickers: The combined length of the Media Tickers creates one of the longest digital displays of its kind, displaying multiple streams of constantly updated market and news headlines and financial information, including indices, equities and currencies data. The tickers stream travel-specific information, including world weather and world time, configured to match London City Airport’s daily flight destinations. 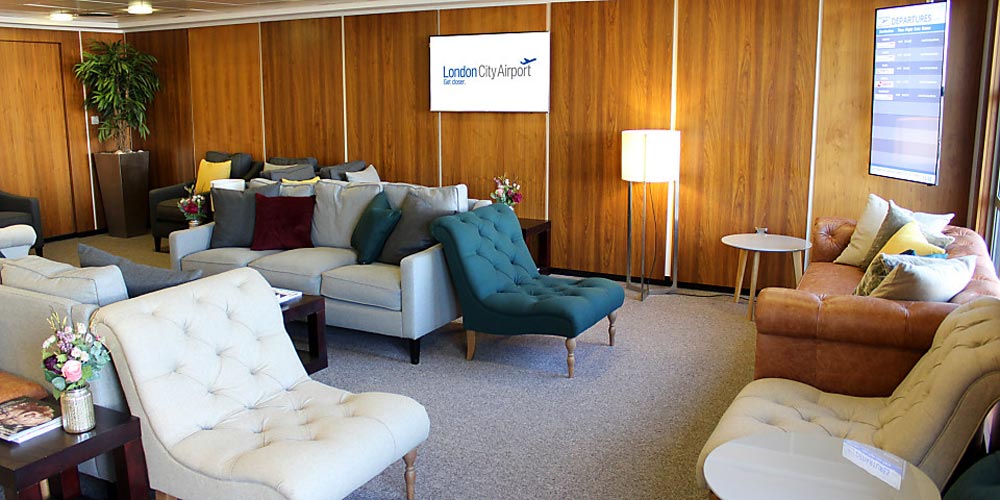 The Lounge: Almost 3,000 sq. ft. of space, enough to seat more than 180 people, the Lounge offers areas for business travelers to work, relax or prepare for their day ahead. In the Lounge, travelers will find free wi-fi, shoe shines and clothes steaming. Its five zones and their purposes are:

The Media Wall: The Media Wall is the heart of the Lounge. It is a vast, vivid digital canvas delivering essential travel information, market news and analysis and relevant data and Bloomberg Television.

Wi-Fi sponsorship: Thanks to Bloomberg, all visitors to London City Airport have free wi-fi access.

How big is London City Airport?

Of the five airports in London, London City has the fewest passengers and the least amount of air traffic. In 2017, more than 4.5 million passengers used London City Airport. On an average weekday, a flight lands about every 20 minutes.

Some 16,000 passengers are on the 260 arrivals and departures each day.

Already the fastest growing Airport in London, London City Airport, in 2016, got the go ahead to undergo a $500 million expansion and redevelopment project that will double its maximum yearly passenger capacity.

It will extend the terminal, providing the ability to add 30,000 flights a year to service two million more passengers a year by 2025.

When did London City Airport open?

The idea for an airport to service the London Docklands area was proposed in 1981. By 1985, plans were approved and construction began in 1986 with the Prince of Wales ceremoniously laying the foundation stone of the terminal building. The Queen officially opened the airport late in 1987. Some 15,000 passengers used the airport in 1988, its first full year of business.

In March 1992, the Princess of Wales re-launched the enlarged airport. By the end of 1995, more than a half a million passengers used the airport annually. The airport continued to make improvements as air traffic grew. In 1998, more than 37,000 flights were made. In 2002, the airport celebrated its 15th birthday and its 10 millionth passenger.

The airport cares about the environment, too. In March 2018, London City Airport became the first airport in the United Kingdom to ban plastic straws in favor of biodegradable paper ones. It found itself using more than 100,000 straws a year that ended up in landfills or polluting waters.

Things to see in London

The Tower of London: The famous building that has been a fortress, a palace and a prison has been part of British history since the 11th century. You can explore the grounds, look for the protected ravens and see the crown jewels -- 23,578 gems, including the Imperial State Crown, which alone has 2,868 diamonds, 273 pearls, 17 sapphires, 11 emeralds, and 5 rubies -- of the British monarchy. The Tower of London, a UNESCO World Heritage Site, was built in 1086 by William the Conqueror.

You can also take a tour and hear spooky stories about the executions, torture and intrigue contained within its walls.

Stonehenge: Mystery surrounds one of the world’s most important prehistoric monuments. The stone circle was erected in the late Neolithic period, around 2500 B.C.

The construction of Stonehenge, like the Egyptian pyramids, has baffled man since the early medieval period. A new addition to Stonehenge is a display of Neolithic houses, reconstructed using archaeological evidence and authentic materials. Stonehenge remains a spiritual place for many.

The London Eye: See London and its historic landmarks as you have never seen it from an observation wheel 450 feet off the ground. There is a 4D experience in which a 3D film is combined with effects like wind, bubbles and mist.

The River Thames: Take an afternoon Tea Cruise on a river boat from the Tower of London to the Houses of Parliament and back. On the hour-and-a-half cruise, you’ll see sights such as Shakespeare’s Globe, the Shard skyscraper, the London Eye and Houses of Parliament as you sip tea – or champagne, if you prefer – with your scones and tea sandwiches.

Sea Life London: Walk under a tropical ocean and see colorful clown fish, turtles and seahorses in one of Europe’s largest aquariums. At another point, you are on a suspended platform looking down on many species of sharks. There are a lot of interactive exhibits for the kids, including touch pools with stingrays. There is a rainforest exhibit with poison frogs and crocodiles as well as an ice exhibit with playful penguins.

Harry Potter at Warner Brothers Studio: Walk in the footsteps of your favorite Harry Potter characters as you take a tour behind the scenes of the Harry Potter films. You will also learn how some of the magic took place at Hogwarts School of Witchcraft and Wizardry as special effects are explained.

The four-hour tour takes fans of Harry Potter to places like the Great Hall and Dumbledore’s office where they can get their pictures taken. They can also try drinking Butterbeer and riding a broomstick.

Buckingham Palace: The official London residence of the Queen opens its doors to the public every summer. And, each year, there is a themed temporary exhibit that can only be seen that year. In 2017, the Royal Gifts exhibit displayed the wide range of official gifts received by the Queen. In 2018, the exhibition will celebrate the 70th birthday of Charles, Prince of Wales. Here’s what to see at Buckingham Palace:

The State Rooms: There are 19 State Rooms (and 78 bathrooms) among the 775 rooms in Buckingham Palace. The State Rooms are lavishly decorated public rooms where visitors are received. Some of the rooms were used for royal wedding receptions, most recently for William and Kate, the Duke and Duchess of Cambridge.

The Grand Staircase: The magnificent bronze staircase was built during a remodeling of the palace for King George IV in 1825. Lit by a glass dome in the ceiling, the balustrade is decorated with bronze-casted acanthus, oak and laurel leaves.

Fine art: Hanging on the walls are paintings by famous artists like Rubens, Van Dyck, Rembrandt, Poussin and Vermeer. In additions, royal portraits hang in many of the state rooms.

The Throne Room: A favorite of visitors, you may recognize the Throne Room as the backdrop for many famous royal wedding photos.