Charter a Private Jet to the F1 Singapore Grand Prix

The tiny island nation, located at the southern tip of the Malay Peninsula, is a mere 1 degree north of the equator.

And, being 124 miles from the equator, gives new meaning to “sitting in the hot seat.” Especially when you are a Formula 1 Singapore Grand Prix race car driver.

For, when they start their engines at 8 p.m., the temperature is still about 86 degrees and the humidity not far behind.

Drivers have said getting in their cars in Singapore is like sitting in a sauna wearing a full-body race suit and helmet. They have to constantly drink water so they don’t get dehydrated during the two-hour race on winding downtown public streets.

If the heat isn’t challenging enough, there are several other factors that make this race so exciting.

It’s the first-ever Formula 1 to be run at night. Some 1,600 lighting projectors light the 3.1-mile track with the city skyline as a backdrop.

The Marina Bay Street Circuit has 23 turns, some of them 90-degree. That means lots of braking, which makes the race take longer. It’s an endurance test for drivers who have to stay completely focused for two hours.

Much of that focus is about overtaking other drivers, which is almost impossible on the twisting, turning circuit. Most races have been won by the pole-sitter.

The city streets are bumpier than those on traditional racing circuits. It takes more energy to drive 61 laps when, already sweating and braking, drivers are constantly getting jostled around on rough roads.

Then there’s the problem of cleaning up crashes or debris on the road. In every Singapore Grand Prix, a safety car has been sent out at least once to slow the pace of the drivers as a mess is cleaned up. Drivers who take a pit stop behind the slow safety car have an advantage. When the winner crosses the finish line, there is a huge fireworks display. International singing stars like Pharrell Williams, John Legend, Ziggy Marley, Jennifer Lopez, The Killers, Katy Perry and Shakira take the stage to entertain crowds.

If you want to go, Paramount Business Jets can arrange a flight into nearby airports:

Booking early has many advantages. Enter a few details below to start planning your private jet flight to the F1 Singapore Grand Prix. 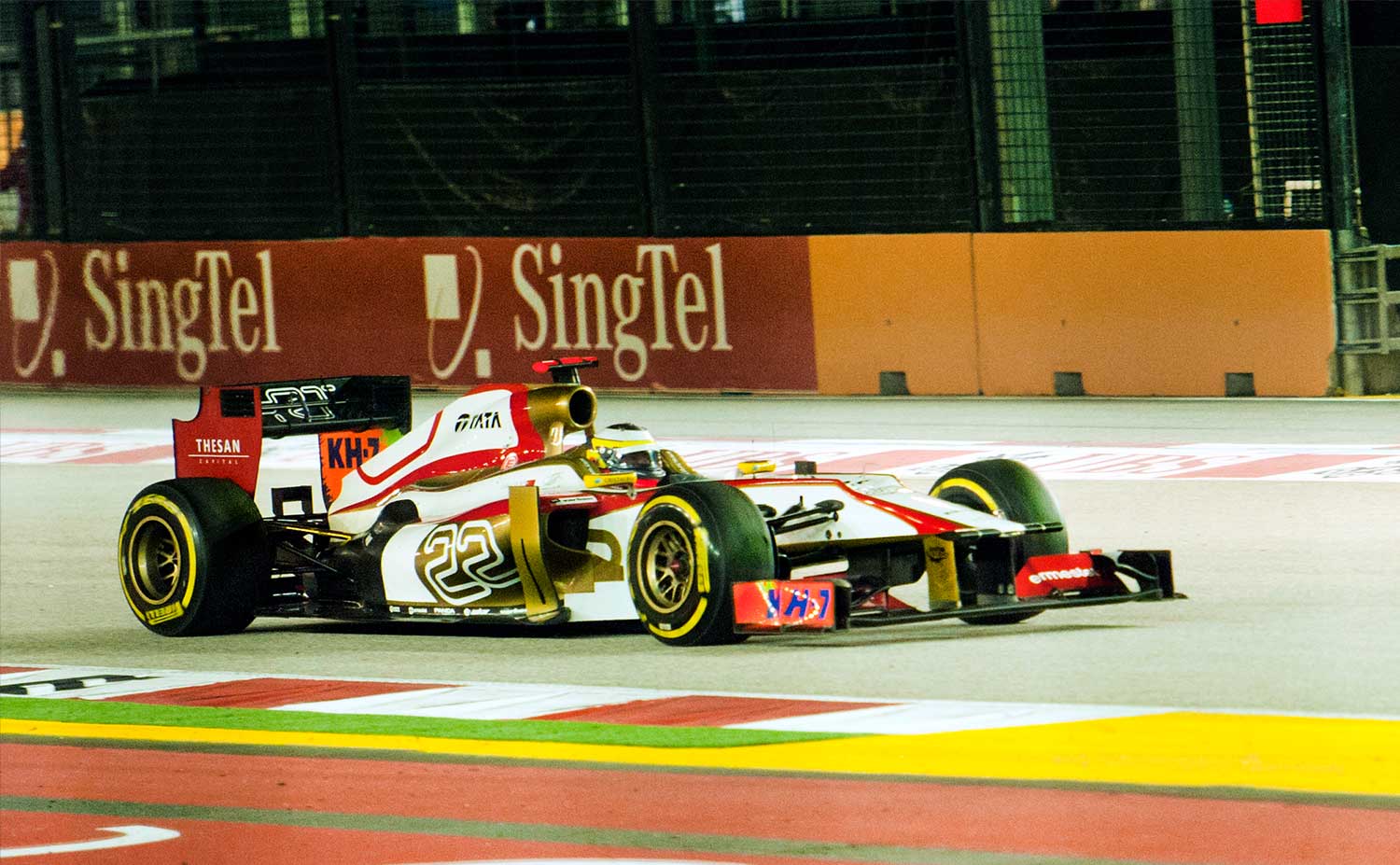 The Formula 1 race isn’t the only thing to see in the country named, legend has it, by a 14th century prince who spotted a lion while out hunting. He called it Singapura, derived from Sanskrit words meaning “Lion City.”

Singapore’s location has made it an important stop on shipping routes for hundreds of years. Its rich history, much of which has been preserved, can be explored in museums and monuments around the city.

Or, you can climb into an air-conditioned glass capsule on the Singapore Flyer, a 42-story observation wheel, and look out over a 30-mile panorama while sipping a cocktail, having high tea or enjoying dinner.

(TV-watchers might remember the Singapore Flyer from “The Amazing Race” in 2010. Contestants had to ride to the top – 541 feet – and then climb from one capsule to another on a metal beam.) And, if you’re hungry after all that excitement, you might want to try Singapore’s most famous dish: Chili Crab. Shell-on crabs, which have been stir-fried in a thickened sweet and savory tomato-chili sauce, are plucked out of the bowl by hand and cracked open to dig out the meat. Hot buns sop up the juice.