The biggest. The greatest. The best.

All those superlatives are used to describe the annual Fort Lauderdale International Boat Show, held every fall in the city called the Yachting Capital of the World because of its 50,000 registered yachts and more than 300 miles of waterways.

The boat show has mushroomed in size, number of exhibits and prominence since a handful of yacht manufacturers and salesmen put the first boat show on at the Lauderdale Marina in 1959. There were 13 exhibitors.

The number of exhibitors grew to 20 the next year when they advertised the boat show on a yacht motoring up the coast with a “Follow me to Lauderdale” banner flying.

Today, there are thousands of exhibits displaying billions of dollars worth of boats – from inflatables to yachts – and boating equipment in seven separate locations. More than 100,000 visitors from around the world come to see the displays of yacht builders and designers and even exotic cars.

If you’re looking to buy or just looking to look, Paramount Business Jets can arrange a private charter flight – your yacht in the sky – to any of the airports in the Fort Lauderdale-Miami area. Paramount can arrange flights into:

Booking early has many advantages. Enter a few details below to start planning your private jet flight to the Fort Lauderdale International Boat Show.

It seems that neither wind nor rain nor luxury tax hikes can stop the show from going on.

The Fort Lauderdale International Boat Show weathered a tropical storm in 1982 and Hurricane Wilma, which hit just a couple of days before the 2005 boat show. They moved it back a week and opened as usual.

Innovations put into play over the years to help in bad weather include the installation of more than five miles of unsinkable floating docks.

The tents are now made with a hard outer shell holding them up instead of poles in the center. They are sturdier and offer better space for exhibits. Instead of one large big top, there are many smaller tents, which are easier to air condition.

Beer stands have gone from one to eight. It’s never far to a cool one. More beer is sold at the Fort Lauderdale Boat Show than at the Super Bowl.

Don’t drink beer? There are all sorts of other things to buy: clothes, electronics, fishing, safety and diving equipment, jewelry, hats, artwork, and boating parts and accessories. 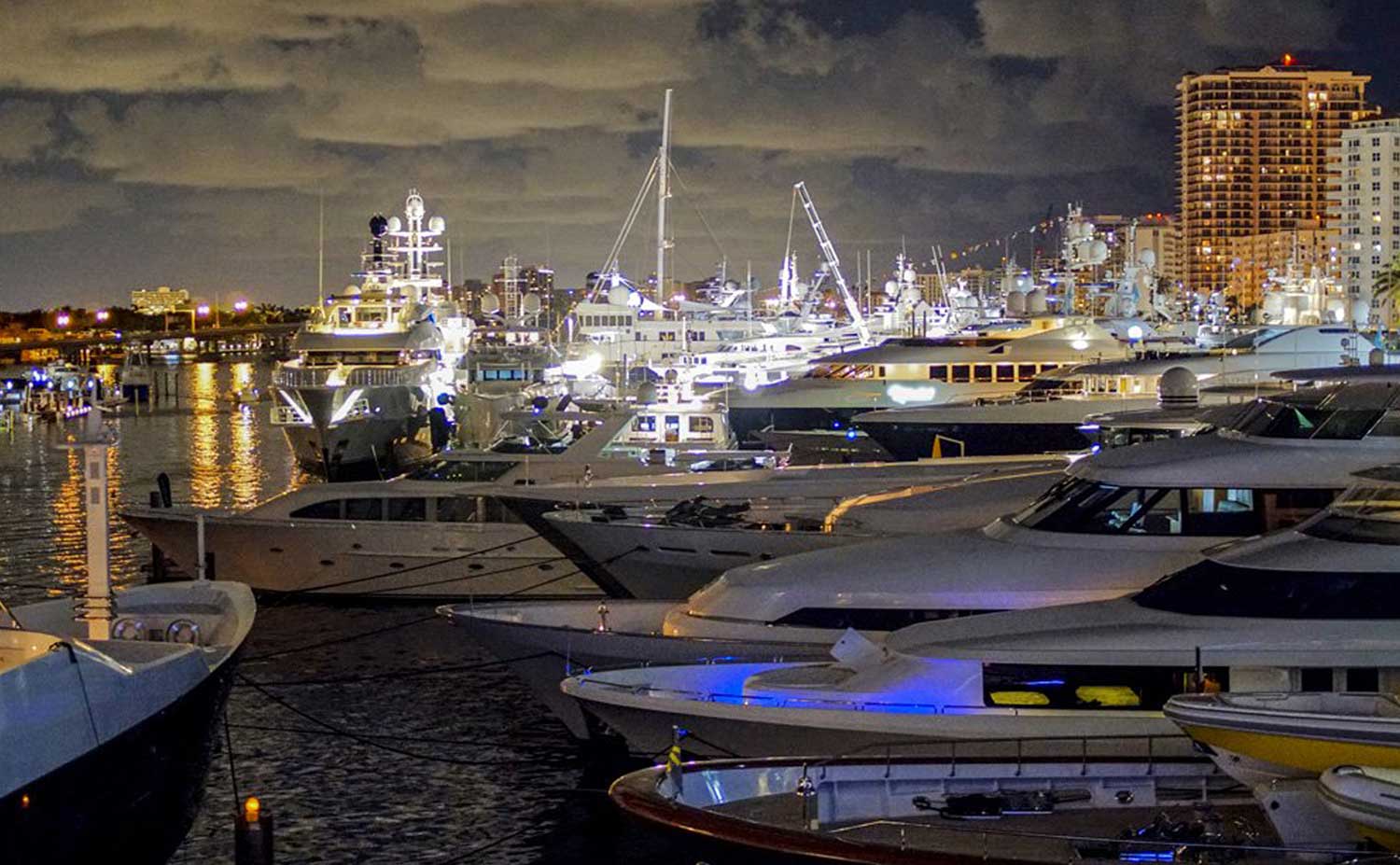 The last thing is the saddest. No, you can’t go on the mega-yachts and super-yachts – not without an appointment, anyway. This isn’t an RV show. There’s no traipsing through the insides of these $50 million yachts. That will have to be left up to your imagination – and the pictures in your boat show program, which, if you’re lucky, will have a cover designed by the famous marine wildlife artist Guy Harvey, who credits the 1986 Fort Lauderdale Boat Show, in which he was invited to display his artwork, as the event that jump-started his career. He designed the first program cover in 1988 and, since then, his art has graced the cover more than a dozen times.