Charter a Private Jet to the F1 Belgian Grand Prix

The thrill of car racing belies the serenity of the healing waters in the Belgium countryside once a year for the (Belgian) Spa-Francorchamps Formula 1 Grand Prix.

The 191-mile race on the 4.4-mile circuit – the longest of the Formula One championship tracks – is located in a valley in the mountainous Ardennes forests in the city of Stavelot, between Spa and Francorchamps.

The fast and hilly route necessitates driver skill as much as any on the circuit and was further emphasized with the 2015 change that disallows remote engineers advising the drivers on their getaway at the starting gate. It’s all up to the drivers themselves.

Dramatic elevation changes, several good over-taking spots and unpredictable weather make the scenic and historic course with its 19 turns a favorite of drivers and fans alike.

Want to see what the drivers see? Take a lap with Nico Rosberg, Mercedes Formula One racer from Germany, along the circuit’s narrow city streets and hairpin turns.

Whether you want to see the notoriously dangerous race with its famous Eau Rouge/Radillon combination where drivers must, after making a hairpin turn, race on a downhill straightaway before the steep uphill that forces them to make left-right-left corners with blind summits or relax in the notoriously healing waters of Spa, Paramount Business Jets can arrange flights to take you there. There are many options for getting there:

Booking early has many advantages. Enter a few details below to start planning your private jet flight to the F1 Belgian Grand Prix. 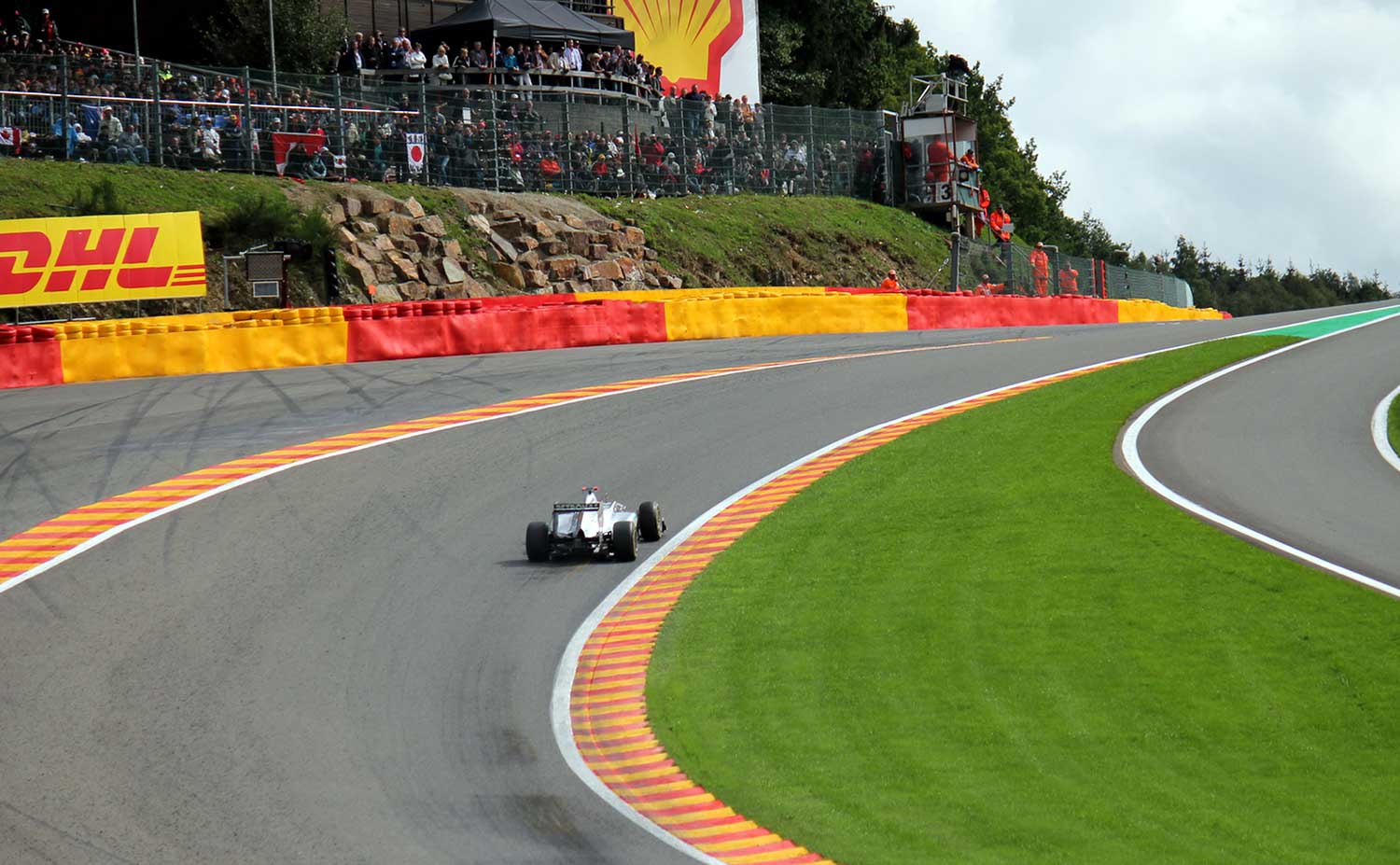 While it’s hard to believe the race could be any more thrilling, the course is actually safer than it used to be when racing started on the public roads that comprise the course in the 1920s. It was shortened from 9.3 miles in 1979, eliminating the parts through towns in the urban countryside.

It rains – a lot – at the Spa-Francorchamps. At one point in race history, it rained 20 years in a row. However, it’s often isolated rain showers that allow drivers to be on one straightaway in the sun and another in the rain in one lap.

And, after the noise and excitement of the race, what better place to go for a grand respite than Spa, the city so famous for its healing geothermal and mineral springs that it has become the eponym for any place that has water believed to be health-giving?

The city is the oldest in Europe, known for its health tourism. Visitors, including noblemen and artists, have been going there for health benefits since 1600.

Les Thermes de Spa, perched on a hill overlooking the town, has some 8,600 sq. ft. of 90-degree pools filled with water from the Clementine Spring. In addition to the hydrotherapy that includes bubbling seats, visitors can also get peat baths or play water games. Instant relaxation.