Charter a Private Jet to the Albuquerque International Balloon Fiesta

You’ve no doubt seen breathtaking photos or videos of hot-air balloon launches when hundreds of colorful balloons take to the sky en masse. The most magnificent – and biggest – of these is the Albuquerque International Balloon Fiesta, which takes place every October in New Mexico.

As beautiful as the scene is in photos, imagine what it looks like in person. If you’d like to be one of the 750,000 people who gather in the desert every year to watch more than 600 balloons take to the day and night skies, Paramount Business Jets can arrange a charter flight for you into any nearby Albuquerque airport, including:

Booking early has many advantages. Enter a few details below to start planning your private jet flight to the Albuquerque International Balloon Fiesta.

The Albuquerque International Balloon Fiesta started in 1972 with 13 balloons.

Today, with upwards of 1,000 balloons, it is the largest of the more than 100 hot air balloon festivals that are held annually around the world.

The success of the event is due in large part to the weather – October mornings in New Mexico are cool and gorgeous – and the area’s wind patterns that seem almost custom-made for ballooning.

The winds, called the Albuquerque “box,” come from the north at low elevations but shift to southerly winds at higher elevations. That allows balloonists to navigate in a vertical box, going up, moving south, going up higher, moving north, coming down where they started.

The first gathering of 13 balloons in 1972 was held in the parking lot of Coronado Center Mall in Albuquerque as a promotion for the 50th anniversary of television station KOB.

Although 21 balloons were invited to attend, a storm in the Midwest caused last-minute cancellations. Even though only 13 balloons participated – coming from places like Arizona, California, Iowa, Michigan, Minnesota, Nevada, and Texas – some 20,000 spectators gathered to watch. The pilots loved the air patterns, and the spectators loved the show.

The following year, the event, which was moved to the New Mexico State Fairgrounds and renamed the "First World Hot Air Balloon Championship,” drew not 13 balloons but balloons from 13 countries.

The event is now held at its permanent home, the 365-acre Balloon Fiesta Park, where it has become known as the world’s most photographed event. Organizers estimate more than 25 million photographs are taken at the fiesta. 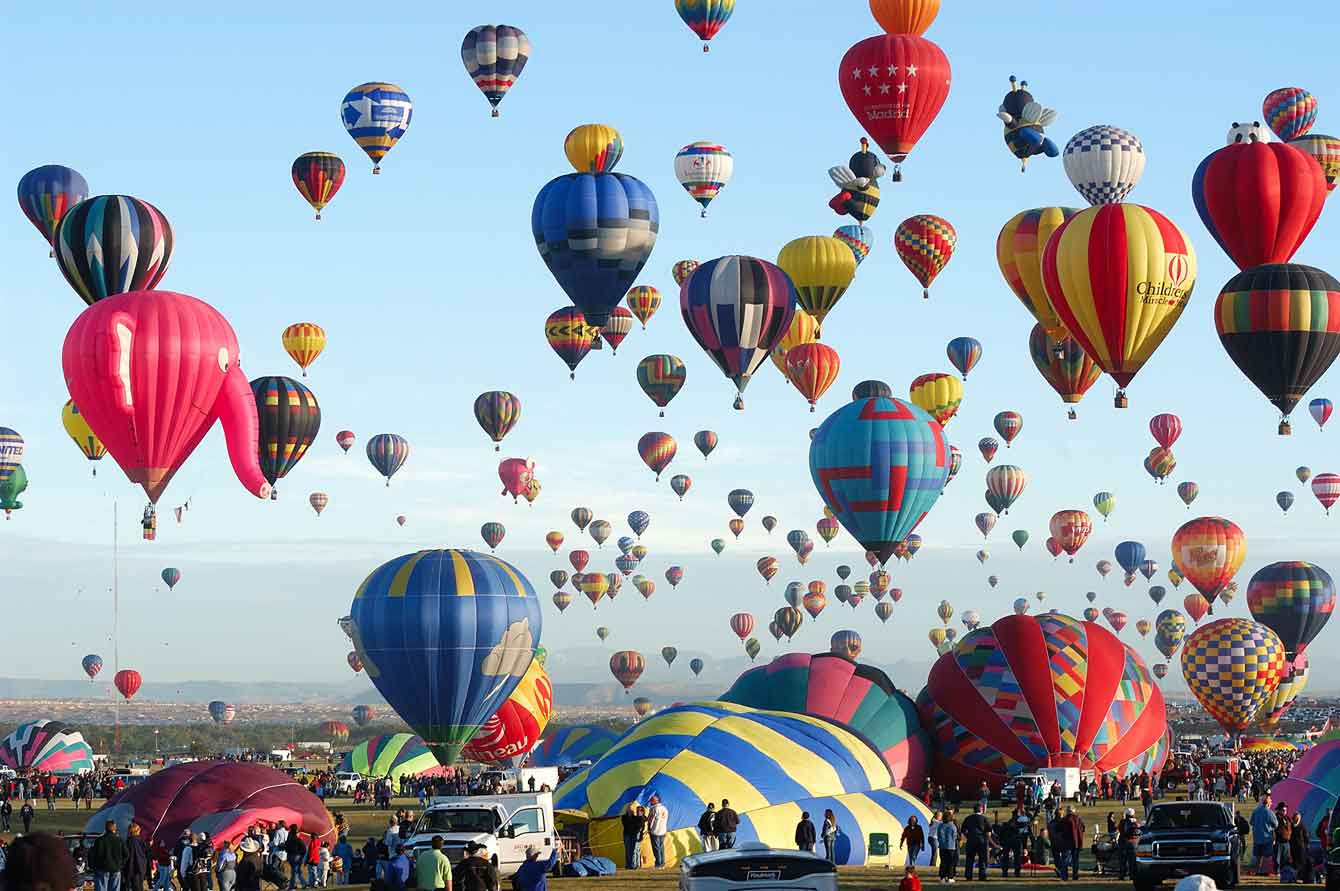 As the Balloon Fiesta grew, so did its number of events, many of which have become audience favorites. Here are some of them:

In 1979, pilots took off over Albuquerque on Christmas Eve, all lighting their burners at the same time to light the balloons from within and set the sky aglow. The sight of what looked like giant Christmas ornaments floating though the sky was so amazing that it gave birth to such nightly events around the world.

Balloon Glows, added to Balloon Fiesta in 1987, are now one of the most popular events there.

In 1989, balloons of all different shapes were added to the Fiesta in the Special Shape Rodeo.

The 26 shaped-balloons that participated in the first event were such an incredible sight, they created traffic jams. Today, there are more than 100 shaped-balloons at the event.

The Mass Ascension, a launch of all participating balloons, has been part of the Fiesta since the beginning. Balloons launch at 7 a.m. in two waves, with launch directors dressed in black and white stripes making sure everyone gets up safely. The clear desert sky provides a canvas for the multi-colored balloons. The sight of 600 balloons all taking off at the same time is as exciting to Fiesta veterans as it is to first-timers.

Your balloon will lift off with all the others during the morning’s Mass Ascension. If you want even more luxury, private, and VIP rides are also available.

The official website of the Albuquerque International Balloon Festival includes an interview with Dick Brown, a member of the Balloon Fiesta Heritage Committee who has been with the event since that first launch in 1972.

“(The committee is) a group of seasoned balloonists who endeavor to capture the Balloon Fiesta’s history before we get too old to remember,” he said.

Here are some excerpts from the interview:

What advice do you have for someone wanting to get involved?

Set your alarm clock for 4 a.m., insert yourself in the smooth-flowing Balloon Fiesta traffic, find that special parking place waiting just for you at Balloon Fiesta Park, and get out there on the launch field.  Mingle among those swaying giants, talk to the pilots and ground crews, and volunteer to help out.  Before you know it, you’ll be involved.

What tips do you have for first-timers?

Become second-timers.  Your first ballooning experience, whether as a spectator, a launch or chase crew member, or a Balloon Fiesta volunteer, will surely get you hooked on ballooning.  And remember, ballooning is a year-round sport in Albuquerque, so don’t just wait for the next annual Balloon Fiesta to roll around. There are always interesting programs and events going on.

If you could take a ride in any balloon, which one would it be and why?

This is a hard question for a retired balloon pilot.  I have flown in hot air balloons all across the USA, hydrogen gas balloons in Europe and the Goodyear airship Columbia over Los Angeles.  There are times I miss my old balloon (Blue Dragon N616DB) and there are other times when I dream of a special shape balloon, more specifically, a US Navy nuclear submarine. Balloons and submarines work on the very same principle, called the “Archimedes Principle.”  Balloons float in the air, submarines float underwater.  As a former balloonist and a former submariner, I’ve just not been able to keep my feet on the ground.  So my special shape would be big and black, long and skinny, with USS New Mexico (SSN-779) emblazoned on the port and starboard sides.  Control lines would move the rudder and diving planes.  So I choose that balloon for my next ride, even if it’s only in my dreams.

Just outside Balloon Fiesta Park is the Anderson-Abruzzo Albuquerque International Balloon Museum. It is a museum dedicated to the history, science, and art of all types of ballooning and lighter-than-air flight. Find out what you can do and see at the museum here.