Radar stands for radio detection and ranging. It’s the use of electromagnetic waves to determine the height, speed, and distance of both moving and fixed objects. A radar system uses a transmitter, which puts out either micro or radio waves. These waves are reflected off of targets and return to a receiver, usually located near the transmitter. The return signal tends to be weak and typically needs to be amplified. The basic components of a radar system are: 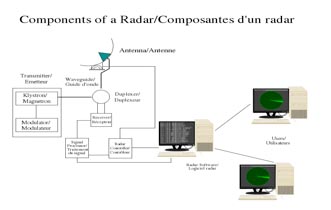 Radar is used in aviation by the government and the general public to detect airplanes and targets moving through the air. It is also used to detect the presence of moisture in the air that poses a threat to aircraft.

Radar was first used in 1904 by Christian Hülsmeyer to detect the presence of distant metallic objects. It demonstrated the ability to detect ships in dense fog, but not their distance. Before the outbreak of the Second World War, developments by the Germans, Americans, French, Soviets, and British led to the development of the modern radar system. However, the British were the first to use radar systems to their advantage to detect German aircraft. The war was the primary impetus for the advancement of radar, which operates on three fundamental principles: reflection, polarization, and interference. Reflection: this is when objects of different densities in their surrounding environment scatter the radar waves. They are particularly scattered by metals and carbon fibers, making them greatly adapted for the detection of airplanes. Materials that contain magnetic properties like water tend to absorb radar waves and decrease reflection. This is particularly good for the detection of weather because it shows precipitation in the air. A radar screen depicting a hurricane is an example of this.

Reflection can also be an advantage when trying to avoid detection. When radar waves are deflected, they scatter based on the angle at which they hit an object. For example, stealth aircraft avoid radar detection by angling the radar waves towards the inside of the plane instead of outward. They do this by having the airframe composed of many angles, angled towards the center of the aircraft.

Polarization: this is the orientation of oscillations put out by magnetic waves. In a radar signal, the electric field emitted by the signal is perpendicular to the direction of the signal. There are three main types of polarization used by radar: circular, linear, and random.

Interference: like with a detection system, radar needs to be able to distinguish between objects. Interference is the radar's ability to distinguish between noise in the surrounding environment and the object of intended detection. There can be passive or active interference, and a radar's ability to overcome it, is called the signal-to-noise ratio (SNR). The higher the SNR ratio, the better the radar detection capability is. Since radar works through electromagnetic waves, many things can affect the signal. Things like the abundance of radio signals, also known as clutter, can be major influences in determining the SNR of a radar system. Noise generated by natural radiation and electronic components can also play a role. On the other hand, jamming is the practice of transmitting a signal with the exact wavelength as the radar, so an object can be disguised as the radar signal.

There are all sorts of measurements that can be made when talking about radar, such as: the amount of power returning to the receiver, the speed, and strength of the signal, the time it will take the signal, or how big the antenna needs to be to transmit the signal. All these calculations can be computed with the help of the radar equation. This calculates the amount of power Pr returning to the receiving antenna, from which all or most aspects of the radar signals can be determined.

In the common case where the transmitter and the receiver are at the same location, Rt = Rr and the term Rt² Rr² can be replaced by R4, where R is the range. This yields:

Since radar waves are electromagnetic waves, they travel at the speed of light (186,000 miles per second). Using knowledge of how fast the wave is traveling and the time it takes to get a return signal, you can determine how far away the object being detected is. The speed of radar is relatively constant, but the frequency can change.