Navigation, in essence, is any process of controlling a craft or vehicle to make it from point A to point B. The word "navigate" originally comes from the Sanskrit word "navigath," meaning to move or direct. Ancient people used the stars to find their way from one place to another and to map their location relative to the world. In the Christian story about the birth of Christ, Joseph and Mary navigated their way from Jerusalem to Bethlehem by using a bright star. Christopher Columbus discovered the Americas by navigating the Atlantic Ocean with the use of constellations. It wasn’t until the invention of the radio that navigation really took off with the help of electronic devices to give locations, directions, and time.

Aviation uses many kinds of navigation. The most reliable is the Global Positioning System or GPS, which uses the help of four to five satellites to give altitude, position, and time to anyone holding or possessing a receiver. A GPS receiver can be accurate within up to 5 feet of your actual position. That’s a 99.7 success rate compared to other forms of navigation. 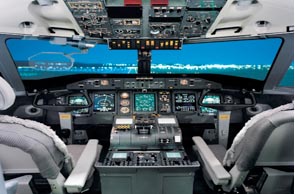 VORs would be the second most common form of navigation today. It stands for very high frequency omni-directional beacon radio. In layman's terms, it is a rotating beacon that is oriented to magnetic north and broadcasts an outward signal in all 360 degrees.

One part of the signal is always oriented to magnetic north, while the other part of the signal is constantly changing direction. A receiver in the airplane picks off the signals and determines the phase timing to plot the position of the aircraft relative to the ground station. Less commonly used are NDBs, or non-directional beacons. They work much like a VOR, but determine just the strength of the signal, which is just broadcasted. It then uses the help of an ADF instrument (automatic direction finder) on the aircraft to locate a direction to the station on the ground.

Pilots without any form of electronic navigating device can use more traditional methods of navigation like dead reckoning or pilotage. Dead reckoning is when a pilot uses outside landmarks or ground references such as lakes or mountains to determine their position on a chart. A pilotage is when a pilot uses ground speed, position, or distance to determine any one of those three.

Navigation is perhaps one of the most used things in today’s world. Driving your car down the road and reading a street sign is a form of navigation. Route numbers, traffic lights, and finding your way to your terminal in an airport are all forms of navigation. In a world becoming increasingly more globalized, navigation is becoming more of a necessity.