A contrail, or "condensation trail", is a streak of cloud which is created by a jet engine in certain atmospheric conditions. Contrails tend to form very high in the atmosphere and can cause the development of cirrus clouds. In some cases, they can linger for hours. They linger longer when humidity levels are high. Contrails can be formed by warm, moist air that passes through the engines of a jet and then comes into contact with cold air, causing the water to precipitate out and condense. Contrails can also be caused by the reduction in air pressure associated with the wings of jets, which causes the air to cool down, promoting condensation and the formation of a contrail. Normally, contrails appear in the form of large white streaks of clouds in the sky, which slowly dissipate. 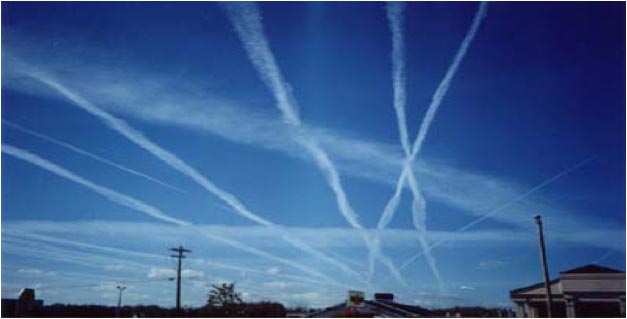 How long a contrail remains intact depends on the humidity structure and winds in the upper troposphere. If the atmosphere is near saturation, the contrail may exist for some time. Some critics believe that contrails could be having an impact on the global climate due to the massive use of jets. They also suggested that contrails are laden with chemical pollutants associated with jet aircraft.