The Local Area Augmentation System, or LAAS, is an enhancement of the Global Positioning System, or GPS (if you haven’t noticed by now, pilots use a lot of acronyms!). The system is an all-weather landing system, similar to an ILS, which uses GPS to locate and direct an aircraft to the runway. The LAAS is a redundant system used to update, in real time, the GPS locations of aircraft in the airport vicinity.

GPS is an extremely accurate tool, but if a satellite develops a problem with its signal or its clock becomes out of synchronization, it will still transmit and cause an error at the receiver. This may lead the receiver to think that it is in a different location than it actually is. The LAAS system corrects the GPS signal and transmits the information to the aircraft. A few feet off here or there may not sound like a big deal, but if a pilot must land an aircraft in zero visibility conditions when he cannot even see the runway until the wheels touch down, it can make a big difference in whether the plane will land safely.

If there is a problem with a GPS system, the GPS satellite will still transmit to the receiver. If there is an issue with the ILS system, the system will shut down, and instrument landings will not be allowed until the system is back up. Because the GPS will continue to transmit even if the information is incorrect, the Local Area Augmentation System is used to fix the issue and give a real-time position to the pilot and ground controllers.

The biggest benefit of an LAAS system is cost-savings. An airport with multiple runway ends requires an ILS system for each end of the runway. If an airport has three runways, it will need six ILS systems. These six ILS systems can be replaced with just one LAAS system, which would be the most cost-effective and easiest to maintain. Also, while the ILS requires a long straight-in, direct approach to the runway, the LAAS can position the aircraft to maneuver around obstacles or away from areas around the airport with noise ordinances. LAAS is a great benefit to the airline industry and general aviation. 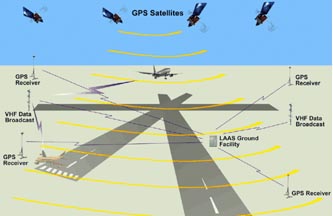