As the aviation market continues to grow, the oncoming of new aircraft designs is inevitable. Private aviation is no different, and the presence of small but powerful jet aircrafts is becoming more common, with the race towards the best and most affordable very light jet aircraft taking precedence.

While the Honda Jet made its debut in 2015, and was followed by the Cirrus Vision Jet in 2016, the two are still widely used today as they are some of the most remarkable light business jet aircrafts. Let’s take a look at their characteristics and discover their strengths.

The comfort of the interior is important with both short and long distance flights. If you’ll be sitting in the same space for over three hours, it’s important to be comfortable and well equipped with amenities.

The Honda private jet is enjoyable with its 12 foot long cabin at a 4 feet 10 inch height. Maintaining its luxury is an easy task as the seats are comfortably facing each other providing ample leg room in a spacious design. 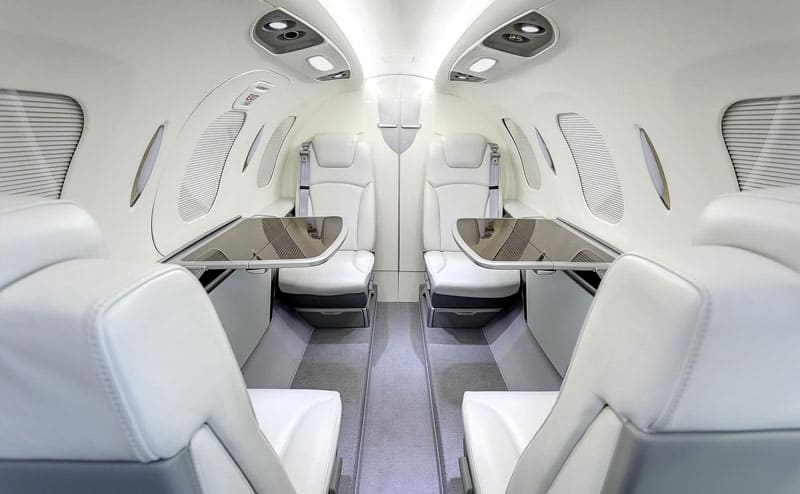 Meanwhile, the Cirrus Vision jet plane carries a shorter cabin length at 11 feet, but a slightly wider cabin interior at just over 5 feet. Either way, both aircraft carry a similar but comfortable amount of space in the cabin. 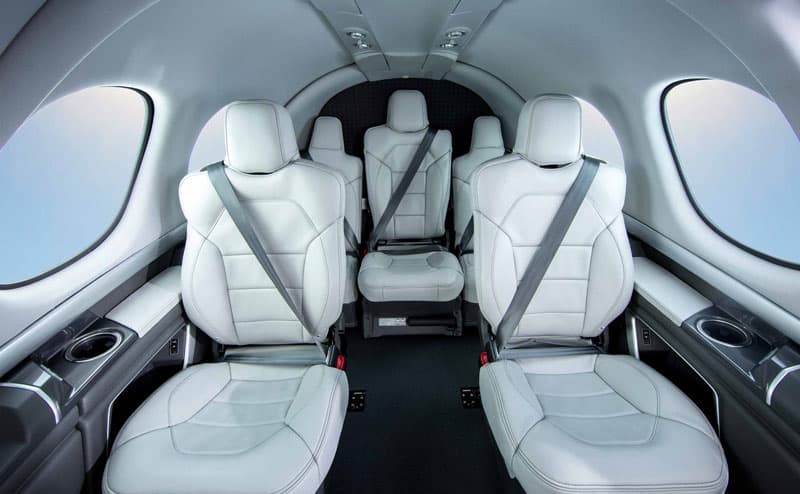 The Honda Jet also embodies its title of private jet thanks to the small galley station located at the front of the aircraft, allowing room for a coffee maker and kitchenette to provide that extra sense of comfort.

The Cirrus Vision jet packs it’s interior with convenient business commodities. A large entertainment display is provided, allowing connectivity to personal devices, and a center console provides extra desk space so you can complete all business matters before arriving at the destination.

Of course, the performance is an important factor when it comes to deciding between these two very capable aircraft. When considering the features available, three of the most key components would be the aircraft’s speed, distance, and fuel burn.

Distance is arguably the most important factor when it comes to an aircraft. Range takes into consideration speed, altitude, and fuel burn to create a calculated distance in which the aircraft can go, affecting your choice of airports to travel to.

The Honda Jet range can be up to 1635 miles with a service ceiling of 43 000 feet. Because of the high altitude, less fuel is burned, allowing the Honda Jet plane to fly such a large distance.

The Cirrus Vision Jet range is 1381 miles when loaded to economical cruise. This means the aircraft is carrying less weight, allowing for less fuel burn and achieving a further distance. This comes at the cost of either carrying less passengers, or less baggage, so packing lightly will be a must.

Fuel burn is decided by a few factors. A higher altitude means less dense air, and therefore less fuel is burned. A higher weight means more fuel burn. More speed, distance travelled, and traveling with or against the wind, will all decide whether there is an increase in fuel burn. The amount of fuel burned means more money spent on fuel, resulting in a less economical and ecological travel.

While the distance and time in which an aircraft can travel is important, how much it can carry is a detail that must also be considered. Whether it be passengers or bags, the aircraft needs to be able to carry enough weight so you will be able to bring everything you need to your destination.

The Honda Jet can carry up to 7 passengers, including two pilot seats. The seats are made of a fine executive leather, and the four cabin seats are placed facing each other, making a homey seating arrangement for easy conversation.

The Cirrus Vision private jet has a little more flexibility, and can seat up to 7 people including the pilots if so desired. The seats are all arranged facing forwards, but the placement and number is customizable, with two front row seats behind the pilot seats and up to 3 additional seats in the rear. This arrangement is often compared to a standard SUV, and is a great option for bringing kids or friends.

Baggage capacity also needs to be considered. Whether it’s a business trip or vacation, either destination could require some important items to be brought. The Honda Jet is a remarkable small private jet that can fit up to 9 average sized bags in the baggage compartment, or a payload of up to 1400lbs. The bags are placed in the rear baggage compartment so it’s important to keep what you need for the duration of the flight in the cabin with you.

The Cirrus Vision jet does not fall far behind, and it’s rear baggage compartment can fit its fair share of bags. The Cirrus Vision jet is a close comparison to the Honda Jet with a payload of up to 1328lbs, making it capable of carrying all of your essentials and then some.

The title of most cost effective private jet has been up for debate for many years. While the initial purchase price of the aircraft isn’t the only cost of the aircraft, it is the most expensive one.

The Honda Jet price starts at around $5 million USD, however you can purchase older models at a lower price. The Cirrus Vision jet price on the other hand starts at about $2 million USD, making it well known as one of the more affordable private jet options. Both are very much loved by their owners, and anyone who has either of these planes will not hesitate to mention their adoration for these remarkable aircraft.