A VFR flight plan is filed anytime a pilot goes on a cross-country flight, weather permitting, and is going to operate under FAR part 91 VFR flight rules. A VFR flight plan is not required to be filed provided the flight does not take the aircraft through class B airspace, but is strongly recommended by the FAA in case of an emergency.

In order to file a VFR flight plan, the pilot must either call the local flight service station (FSS) in the air or contact them by phone before takeoff. Information such as the pilot's name, phone number, true airspeed (TAS), route of flight, fuel on board, and other pertinent information for the flight is required. An example of a VFR flight plan is shown below: 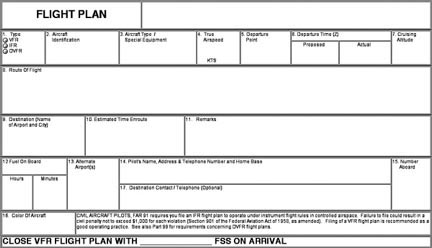 After a VFR flight plan is filed, it must be opened. The pilot does this again with the help of the local FSS and can be done from the ground or the air. A VFR flight plan that is not opened is good for 3 hours, after which it expires, and the pilot must file a new one. Once the pilot reaches or is within sight of their destination, they must call the FSS local to that area and close their VFR flight plan. If a pilot forgets to close their flight plan within a half hour after the reported ETA (estimated time of arrival), the local FSS forwards the VFR flight plan to the local search and rescue center to have airplanes dispatched. This is done as a precautionary measure to ensure the safety and survival of people on aircraft that have possibly crashed, and can be both costly to the pilot and the local rescue center if no such accident occurred.