KTAS is the abbreviation for true airspeed, in knots. True airspeed is the speed of an aircraft relative to the body of air in which it flies, meaning the difference between how fast the plane is traveling and how fast the surrounding air is traveling. While the aircraft is not being blown in any direction by wind, and in level flight, the true airspeed is the same as the aircraft’s ground speed.

If wind is present, a ground speed is calculated from the true airspeed and an angle is given for the pilot to fly in order to maintain the course and direction that he wants to follow. For instance, if an aircraft is traveling north, and a gust of wind comes from the northwest side of the aircraft, the pilot will need to steer the airplane a little towards the northwest in order to maintain his straight northerly course. Below is the equation that the system uses to calculate true airspeed:

The Mach number (pronounced Mock) is found by dividing the speed of an object through air by the standard speed of sound. A Mach number that is below 1 is known as a "subsonic" speed, while a Mach number above 1 is considered to be "supersonic". Military fighters and reconnaissance aircraft, as well as the now-retired Concorde jet passenger airliner, can reach supersonic speeds.

When Mach 1 is reached, a loud, thunderous clap is heard by observers on the ground. This noise is known as the "sonic boom" and is also referred to as "breaking the sound barrier". An egg-shaped cloud of water vapor forms over the aircraft and is quite stunning to see. 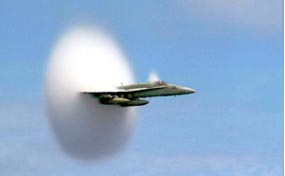