VFR stands for Visual Flight Referencing. VFR belongs to a category of 3 main weather conditions that pilots must choose from before flying; VFR, DVFR, and IFR. VFR applies to a set of rules or guidelines that can be followed by pilots while they are flying. It involves the pilot having to rely on visual inputs from outside the airplane to get from point A to point B safely. The pilot also uses his instruments to fly the plane, but he is required to be visually in tune with his outside environment. In order to keep flying VFR, the pilot must remain clear of clouds by a certain distance at all times. These distances are called cloud clearances.

When flying VFR, a pilot uses 2 main methods of navigating the aircraft from point A to point B. The first is pilotage. Pilotage is a VFR form of navigation in which the pilot uses outside land features, topographical features, stars, and other types of landmarks to find their way to their destination. The second form of navigation is called "dead reckoning." Dead reckoning is a VFR form of flying in which the pilot uses his current position and his distance to his next position along with his ground speed to figure out the time to his destination. Both dead reckoning and pilotage are done with the help of a VFR sectional chart. This is a chart that is issued for a specific area, usually covering a state, and identifies all or most of the topographical landmark features within that area. Some other ways pilots navigate VFR are called radio navigation and satellite navigation. VFR radio navigation is primarily done with the help of a VOR (very high frequency omni-directional beacon radio). VFR satellite navigation is done with the help of mainly GPS. This is where numerous satellites in space send signals back and forth to the aircraft, giving it its position on earth.

Like all other things in life, flying VFR has its own rules. Fuel requirements are one of those rules. In order to fly VFR, a pilot must have enough fuel in the aircraft to get him to his destination and 45 minutes of cruise flight thereafter. If the destination is too far away, then the pilot must plan to refuel at a closer airport and must have 45 minutes of fuel for cruise flight left over before landing at the airport intended for refueling. There are 6 types of airspace defined by the FAA, and only 5 of them are approved for VFR light (excluding class A airspace). In order to fly VFR in class B – G airspace, you have to abide by certain weather restrictions, which are: 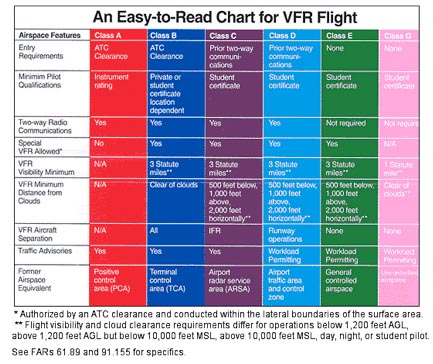 Flying VFR is the preferred choice for much of general aviation. If you hold a private pilot's certificate without instrument privileges, then your only option is to fly VFR. If you find yourself in a situation where the weather is below VFR minimums, then you can file an SVFR (special visual flight referencing) flight plan, which allows you to fly VFR with fewer weather minimums. However, to fly SVFR, you must hold an instrument flight rating.