Stage length is defined as the distance a plane flies from takeoff to landing in a single leg. If a plane has multiple stops along the way, then it has multiple stage lengths. Stage lengths are more commonly known for flights that have more than one stop to a destination. If you were taking a flight from New York City to San Francisco with two stops along the way, then that flight would have three stage lengths. For a charter or airline company, stage lengths come into play when determining the total amount of business they are doing. To compute the average stage length for an airline, you use the following equation:

The lower the stage length, the more cost-effective the airline is. This is especially appealing to the company controlling the airline in question because the longer the legs, the fewer takeoffs and departures the airline performs. This leads to lower costs, since the most expensive part of any flight tends to be the takeoffs and landings from the fuel.

Airlines that have a lower stage length tend to be flying transcontinental flights, which generally bring in more income and help save on fuel costs. The following graph is a representation of the profit made from having a small stage length: 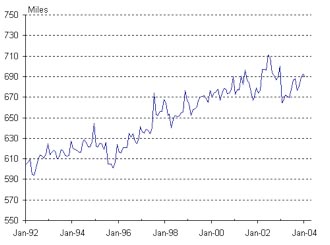 Since charter jets cater to people, they can travel long or short distances. Customers have the option to charter a jet to one location without the requirement of charting it back. A company will often do this primarily for two reasons: the availability of sales in the location and the relatively inexpensive cost of the flight. If a company has a higher stage length, they tend to fly short distances and waste more fuel. If they can get twice the business in one round trip by having a return customer, the cost of fuel can help be offset.