The Automated Surface Observation System, or ASOS, is one of the many sources of weather information that pilots use before and during their flights. These sources of weather information can be divided into two categories, as some are used before the flight, and others are used during the flight. The ASOS falls under in-flight weather sources. Weather reports and updates are equally important during flight because of the inexact nature of weather forecasting. This means that weather conditions can change rapidly and unexpectedly, deviating from the pre-flight weather information. The National Weather Service operates the Automated Surface Observation System, while the FAA maintains the Automated Weather Observing System (AWOS).

The Automated Surface Observation System provides continuous observations and measures and reports altimeter settings, wind speed and direction, gusts, temperature, dew point, visibility information, cloud and ceiling data, variable cloud height, variable visibility, rapid pressure changes, precipitation type, intensity, accumulation, wind shifts, peak winds, and beginning and ending times. Further, what separates an AO1 (ASOS) system from an AO2 (ASOS) system is that the latter has the capability of distinguishing between liquid precipitation and frozen precipitation. All of this is carried out through the use of numerous sensors, computers, and digitalized voice communications.

ASOS is broadcasted over discrete VHF frequencies and the voice portion of a local NAVAID, as they are designed to be able to reach out as far as 25 nautical miles horizontally in all directions, and up to 10,000 feet above ground level (AGL). The frequencies are listed on the Airport/Facility Directory, and they can also be reached via telephone. The ASOS system installation began in 1991 and is the primary surface weather observation system that is used in the United States today. Up to 1,000 systems are to be installed at airports across the United States. 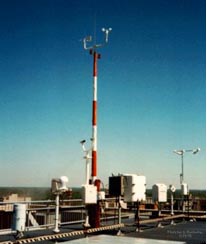