There are five different classifications of Mach number with reference to speed. They are: 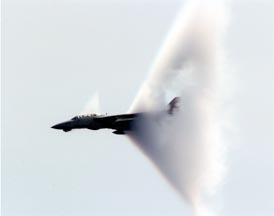 Most airliners currently travel at anywhere from Mach 0.6 to Mach 0.9. Military jets, of course, can travel, in some cases, at hypersonic speeds. When you do travel faster than Mach 1, you break the sound barrier and the air around the plane starts to form shock waves. A shock wave is an abrupt pressure difference caused by the compression of air by the aircraft while moving forward. The shock wave creates a sonic boom, and that is the sound you hear following an aircraft moving at sonic speeds. Depending on the type of aircraft and/or airfoil design, certain kinds of shock waves can be hazardous and/or beneficial to the aircraft, so the speed at which the plane can travel becomes limited.