Jet streams are air currents found in the stratosphere and tropopause, located about 6 to 15 miles above the Earth's surface. They are fast-moving bodies of air moving in the same direction and consisting of relatively the same temperature. Jet streams form near the boundaries of air masses adjacent to themselves, which have a significantly different temperature. An example of where a jet stream would form would be the warmer air to the south of the polar region. A typical jet stream will be thousands of miles long, usually spanning over continents and oceans, and about 100 miles wide. Unlike its huge size in width and length, a jet stream can be as small as 100 feet thick, often ranging from 500 ft to 1000 ft. 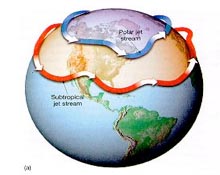 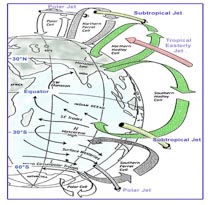 The most major jet streams are found in the Northern Hemisphere, partly due to the presence of the Rossby waves. These are waves that move westward relative to the direction of flow in which they are contained. This, along with other factors, causes jet streams to have a meandering shape as well as the tendency to flow from west to east with respect to the Earth. Polar jet streams tend to be more near the 60-degree latitude area of the Earth and are closer to the ground, typically 6 to 10 miles above the Earth's surface. Tropical jet streams are located more toward the 30-degree latitude line.

In the aviation world, meteorologists use the location of the jet stream as an aid in weather forecasting. Flight time can be affected by either flying with or against the stream. Airliners also have certain hazards that can, in some situations, be fatal to the flight. One type of hazard is clear-air turbulence. Typically found in a jet stream's vicinity, clear-air turbulence forms around the borders of jet streams or in the areas at or between the convergence of two jet streams. Since jet streams are directly impacted by temperature differences, when two jet streams meet with a significant temperature difference, the potential for clear-air turbulence is quite huge. Though turbulence is not one of the most understood weather phenomena, it can, in some cases, be predicted through the use of jet stream charts, and this allows awareness of potential danger.