An Approach Light System, or ALS, is a series of lights placed at the end of a runway in order to guide an aircraft into a safe landing. The lights consist of strobe lights or light bars that move in succession to show the runway centerline and the proper approach angle to make sure the pilot is performing a straight-on landing on the runway.

The most important part of the ALS system is called the Decision Bar. This line of lights is placed 1000 ft from the runway threshold and is used as a visible horizon to help a pilot transfer from instrument flight to visual flight. In bright daylight, this is usually not required, but the ALS system is designed for the night and inclement weather landings. If the pilot cannot see the horizon in inclement weather, the Decision Bar serves as the horizon where the pilot can verify that his wings are level for landing.

Multiple bars of light are placed before and after the Decision Bar, typically in 100 ft or 200 ft increments. This allows the pilot to quickly estimate the current visibility conditions or the distance that he is able to see.

ALS systems are often used in conjunction with other lighting systems, such as runway end lights and touchdown zone lights, which mark the ends of the runway and the area in which the plane should touch the runway, respectively. ALS is just one of the many systems that make modern air travel that much safer. 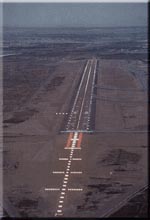