IAS, or Indicated Airspeed, is an instrument reading obtained from an airspeed indicator and is uncorrected for altitude, temperature, atmospheric density, or instrument error. This reading is fed to the pilot’s instruments through a Pitot-Static System (pronounced pee-tow), and is usually abbreviated as KIAS, for Knots Indicated Airspeed.

The Pitot-Static System is a series of pressure-sensitive instruments that are helpful in determining an aircraft’s airspeed and elevation. The system consists of a pitot tube, a static port, and the required instruments for displaying the readings. The pitot tube is typically mounted near the front of the aircraft and works as a ram-air system. What this means is that while the airplane is moving forward, air is forced into the tube, and the tube reads the amount of pressure that is being applied to it. The faster the aircraft travels, the more pressure there is in the tube. The static port is frequently located in an area that is undisturbed by vortices and turbulence from the aircraft, and it can just read the airflow without excess force from the control surface of the airplane. 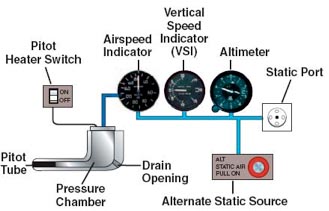 In instruments that are not computerized but instead are run by simple pressure devices such as an aneroid barometer (a device that measures air pressure), the error from the readings increases as the airplane climbs. This is due to the reduced air pressure at higher elevations. Because of this, most aircraft manuals have charts of speeds that should not be exceeded at certain elevations.