In broad terms, an altimeter is a flight instrument because it provides the pilot with information regarding the aircraft’s attitude, direction, altitude, and speed. The altimeter can be further categorized as a pitot-static instrument because, unlike gyroscopic or magnetic instruments, it relies on air pressure differences to measure speed and altitude. Along with the airspeed indicator and the vertical speed indicator, the altimeter uses surrounding, static air pressure but does not use pitot pressure. With that said, an altimeter is an instrument that senses changes in pressure and displays the aircraft’s altitude in feet. At the core of this instrument is an aneroid barometer that measures the outside pressure through the use of a static port on the outside of an aircraft. It also consists of three pointers, the longest one showing hundreds of feet, the middle one indicating thousands of feet, and the shortest one showing tens of thousands of feet. An adjustable barometric scale is built-in to compensate for changes in atmospheric pressure.

The adjustable barometric scale is necessary because of the effects that atmospheric conditions have on static pressure. Air exerts 14.7 pounds per square inch at sea level. However, as altitude increases, pressure also decreases. The temperature of the air can also have an effect on pressure, as a decrease in temperature will produce lower pressure. The reason behind this relationship is that as the temperature of the air decreases, the movement of the molecules slows down. The opposite is also true, as an increase in temperature will accelerate the movement of the air molecules, which in turn will increase the atmospheric pressure. 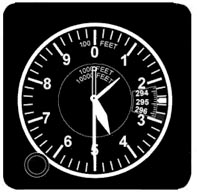