The first aerial refueling between two planes took place on June 27, 1923, when Lowell H. Smith, flying the tanker, passed fuel through a hose to John P. Richter, flying the receiver. Back then, it was as simple as two aircraft flying in formation, with a rubber hose connected to a hand-held fuel tank on one aircraft and inserted into the usual fuel filler on the other aircraft.

Even after almost nine decades, we can routinely reap the benefits of this crucial element of timely air travel. The procedure allows the receiving aircraft to remain airborne longer and, more importantly, to extend its range. A series of air refuelings can give an indefinite advantage, making it possible to transport people or supplies anywhere in the world with just a moment’s notice.

Today, there are two common procedures for aerial refueling: the flying boom and the probe and drogue systems. The flying boom operation is accomplished by maneuvering a long ‘boom’ from controls inside the tanker directly to the fuel tank of the receiver. In the probe and drogue method, the receiving aircraft is equipped with a probe that plugs into a drogue at the end of a refueling hose trailing the tanker.

Advancements in technology have brought us to these current procedures for aerial refueling, which allow the air refueling process to be done very quickly and effectively, ensuring the absolute safety of all parties involved. 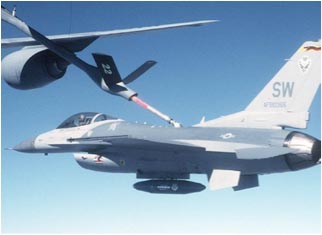 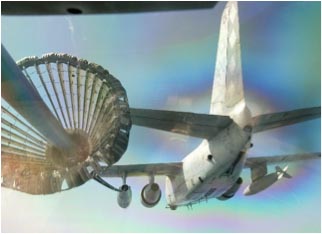