Shaesta Waiz is a young aviator who aspires to fly solo around the world. Her mission for the flight around the world is to inspire women to follow their dreams no matter how challenging they may seem. She is a graduate student at Embry-Riddle Aeronautical University and currently working on completing her thesis on her global flight.

Paramount: Tell us a little about yourself.

Shaesta Waiz: My name is Shaesta Waiz and I am a graduate student at Embry-Riddle Aeronautical University. My family is originally from Afghanistan and my five sisters and I are the first generation to be living in America. I am a pilot and aspire to fly solo around the world in the fall of 2014.

Paramount: What motivated you to become a pilot? 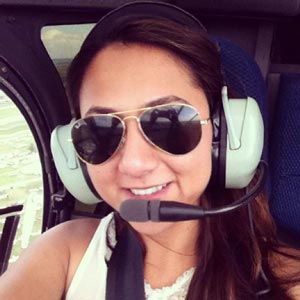 Shaesta Waiz: As a child, I was terribly afraid of flying. I remember watching aircraft accidents on the news in the 1990s. After viewing the aftermath of aircraft accidents, I promised myself then that I would avoid flying in an airplane at all costs. I had a growing passion for criminal justice and received a full scholarship to study at California State University Sacramento. Upon graduating from high school, my parents sent me to Florida as a graduation gift. I had mixed emotions about flying but as a new graduate, I felt fearless and ready to face my childhood fears for the first time. When I boarded the airplane and heard the Captain preparing us for takeoff, I took a deep breath and held tightly onto the armrests. I felt the aircraft accelerating on the runway and suddenly my fear turned into a rush of excitement as I realized we were airborne. During the entire flight, I sat in my seat amazed by my first flight experience. When we landed in Florida, instead of going to the beach, I went to the nearest airport for a discovery flight. From that moment on, I knew I wanted to spend the rest of my life flying.

After receiving my private pilot license, I contacted the Afghan government to see if there were any female license pilots from Afghanistan. When I heard back from the government, I realized that I was the first female Afghan-American fixed-wing pilot in the world. This discovery created in me a new founded purpose and encouraged me to continue my quest to become a pilot. After each flight activity, I felt like my dreams of succeeding in America were coming true.

Paramount: Why did you choose to attend Embry-Riddle Aeronautical University?

Shaesta Waiz: Once I decided I wanted to become a pilot, I started to research the different colleges in hopes of finding the best university to become a professional. It wasn’t long before I came across Embry-Riddle Aeronautical University. The school had an impeccable reputation and the flight training was very prestigious within the industry. I visited the university with my dad and felt at home with every step I took on the campus in Daytona Beach, Florida. I felt a sense of belonging.

Paramount: Tell us a little bit about your flight training at Embry-Riddle.

Shaesta Waiz: I started my flight training at Embry-Riddle in 2008. In the beginning, it was a challenge to adapt to the aviation environment. I didn’t have relatives or friends within the aviation industry so I came into my training not know very much. I was extremely overwhelmed in the first few weeks of my training. It wasn’t until I expressed my concerns to a professor and he told me that even the most successful professionals in aviation were once in my shoes. I took his advice and applied myself to my flight training. Within a few months, I flew solo in the aircraft. My training at Embry-Riddle has been very rigorous but I stand before you a confident and professional pilot. After I received my private pilot license, I worked at Alaska Airlines as the Chief Pilot Intern.

Paramount: What are the characteristics of a superior pilot in your opinion?

Shaesta Waiz: I believe what makes a pilot superior is an ability to disconnect one’s personal life when flying and portray nothing but a great attitude during flight. Flying is a wonderful hobby and/or profession but it is essential for pilots to focus on what he or she is doing along with having a “can-do” attitude. Some of the best pilots I have flown with had these characteristics and made the flight a wonderful experience.

Paramount: Do you have any specific goals or aspiration once you complete your master program?

Shaesta Waiz: I am currently working on my master’s degree at Embry-Riddle. The program I am enrolled in is called the Master’s in Aeronautical Science with a specialization in Management and Operations. My thesis topic is related to flying around the world solo in a general aviation aircraft. My goal is to research all avenues of flying solo internationally with a single-engine aircraft and once I complete my thesis, I would like to use it as a guide for my very own solo flight around the world.

Paramount: Do you think it is more difficult, the same or easier to succeed in the corporate aviation world as a woman?

Shaesta Waiz: I believe women have come a long way in aviation especially in Corporate Aviation. When I attended the Women in Aviation conference in Texas two years ago, I attended a seminar on women in corporate aviation. From what I learned from the seminar and from speaking to corporate pilots, women have an advantage since they are the minority in the industry but also have much to prove once they are hired to fly from a company. I believe it is just as competitive for women as it is men in the corporate world.

Paramount: If you had a choice, what is the one thing that you would want to be known for in aviation? 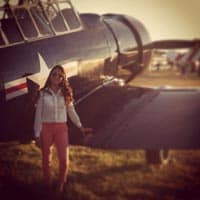 Shaesta Waiz: I want to be recognized as a role model for women around the world. I want to show them that I believe in them through a global flight around the world. The reason why I feel so passionate about this matter is due to the fact that I come from a struggling country where women do not have the opportunity to pursue their educational dreams due to family beliefs, the lack of resources or money or because they are married at a young age and unable to go to school.

I’d like to share some of my struggles and hope women can relate to my story. Upon receiving my private pilot’s license, my father informed me that he could no longer afford to pay for my flight training anymore. Unfortunately, my father was among many who had lost his job during the economic crisis. This news was devastating. I could not understand why I had come so far with my flight training only to have it suddenly taken away from me. I spent many months looking for alternatives like scholarships, loans, and sponsors, but I could not find the finances to support my dreams.

A few weeks after graduating with my Bachelor of Science in Aeronautics degree, I found myself at the Embry-Riddle flight-line watching airplanes take-off and land. I felt tears rushing down my face as I realized my strength and passion for aviation. I knew I had to fulfill my dreams of flight, not only for myself but also for women around the world who struggle to overcome socioeconomic challenges to achieve their dreams. I knew deep down in my heart that I could not give up.

The following semester, I enrolled in the graduate program at Embry-Riddle and got involved with the university. I had the opportunity to attend a university retreat, which discussed the shortage of women in the aviation industry. With my vigorous admiration for flight, I realized that I could make a difference. I spent an entire summer organizing a program that would assist in the recruitment of female students at Embry-Riddle. The proposal was sent to the university president’s office for review and was later approved. Today, I am the Women’s Ambassador Coordinator for the Embry-Riddle Women’s Ambassador Program. Our program has reached out to young women in the hope of inspiring them to pursue an aviation degree at Embry-Riddle. The program resulted in an increase in female students from 14% to 19.6% within one year. Through the Ambassador Program, I was able to continue my flight training.

Paramount: Do you have a role model in aviation that you are inspired by or look up to for inspiration?

Paramount: Are there certain aviation organizations that you belong to, events that you attend or recommend and why?

Shaesta Waiz: I am a proud member of Women in Aviation, the all-female pilot organization Ninety-Nines, and the National Business Aviation Association (NBAA). In addition, I am the creator and coordinator of the Women’s Ambassador Program at Embry-Riddle, which is an organization that helps increase the female population within the aviation and aerospace industry. These organizations have provided me the opportunity to attend events such as the annual Women in Aviation and NBAA conference along with the EAA-Air Venture and Sun n’ Fun airshow. As an ambassador for the university, I am constantly traveling to high schools around the U.S promoting aviation to young girls. I personally believe it is essential to get involved in different organizations related to aviation to broaden my knowledge in the field.

Paramount: If you could have any aviation job or work for an aviation company, which one would it be and why?

Shaesta Waiz: My ultimate goal is to start a non-profit organization to provided aid and relief to women and children in struggling countries. Ideally, I would involve my passion for aviation by owning my own corporate jet when I fly into these countries.

Paramount: What advice would have to offer to women who are considering a career in aviation and why?

Shaesta Waiz: If you are passionate about aviation, prepare yourself for the flight of your life. There is no greater feeling than having the ability to navigate an aircraft through the beautiful skies. My advice to an aspiring pilot is to have patience. Aviation and I encourage you to follow your dreams. There is a demand for women with the aviation industry and I highly urge women to get involved.

Paramount: Is there anything else that you would like us to know about you?

Shaesta Waiz: I want to continue to inspire and support women in aviation as well as women around the world. I hope to follow in the footsteps of aviation pioneers like Amelia Earheart and Jerry Mock, by being the youngest woman to fly solo around the world. I aspire to fly a strategic route over South America, Africa, the Middle East, Asia, India, and Russia. The women in these countries struggle with gender equality and oppression. My flight around the world would be designed to inspire these women to find and pursue their own life dreams and to find success in their chosen field. I want them to understand that they have the right to dream outside of the norms and expectations their culture dictates as I did with my Afghan heritage. I hope to use my personal story to encourage them in the way that they can succeed no matter how far or unachievable their dreams may seem.