A runway is the area of an airport where an aircraft can land or takeoff. Their length is determined by the size of the airport and the type of aircraft expected to land there. Runways are oriented to the direction of the wind that blows the most in the area. The wind direction is converted to magnetic direction and then rounded up or down to the closest magnetic heading in multiples of 10 up to 360. Each end of a runway is numbered with its magnetic opposite, so if there is a change in wind, the runway best suited for flight can be used. For example, in an area where the wind primarily blows in a westerly direction, the runway would be laid out west to east and be named 27 and 9, representing the magnetic directions of 270 and 090. If the wind primarily blew in a 274-degree direction, then the runway would still orient itself with the wind, but it would be called runway 27. If there were two runways running parallel to each other, then the runway on the left would have an "L" after it and the runway on the right would have an "R" after it. For example, runways 27 and 9 would be named 27L/9R and 27R/9L.

From the air, it can be hard for a pilot to tell exactly where a runway is located without the proper equipment. Publications like sectionals, airport facility directory (AFD), or GPS systems will have runway information for specific airports. The aeronautical information manual (AIM) section 2-3 will have all the information needed to safely identify the markings on an airport runway. If a pilot does not have any of these items on him, they can look at the markings on the runway to determine distance, location, and size. The sides of a runway are identified with solid white stripes that run end-to-end. They also have at the approach end of the runway a displaced threshold (area of the runway used for takeoff, taxi, and landing rollout, but not landings) identified by thick, solid, white lines. A dotted white line runs down the center of the runway, with each dash measuring 150 feet in length and the space between them measuring 50 feet.

As well as markings, there are also lights that identify a runway. The approach side is also denoted by green lights, and then the end of the runway is denoted by red lights. The lights change colors based on what side you are approaching from, so you can safely identify the beginning and end of the runway. On the side of the runway are white lights, and on precision runways, yellow lights denote the last 2000 ft. The centerline lights are white as well, and in large runways from the last 3000 ft – 1000 ft of the runway, the lights alternate between white and red, and the last 1000 ft are denoted by red lights.

Runways can be of many sizes in length but come in 3 basic widths: 50 ft, 100 ft, and 150 ft. The width will be determined by the size, popularity, use, and commercialism of the airport. For instance, a runway catering to only general aviation aircraft might be 50 ft wide and 3000 ft long, whereas a runway catering to Boeing 737s and international flights might be 150 ft wide and 10,000 ft long. They are usually made out of asphalt and/or concrete, but sometimes smaller runways will be dirt or grass strips. In Alaska, beaches and ice lakes can also be runways, so the environment can play a role in determining what a runway is made out of. 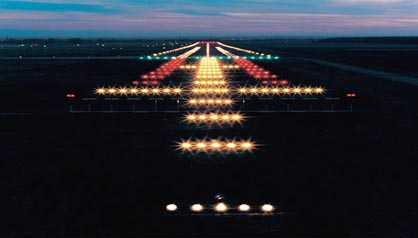