Airway distance is the actual distance flown by aircraft between two points, after deviations required by air traffic control and navigation along established routes. The difference between this airway distance and straight line distance can vary significantly depending on the location, length of the flight, and weather patterns.

Commercial flights are required to file a flight plan with the Federal Aviation Administration (FAA) so that if there is an emergency, the plane will have backup landing locations and so that search and rescue crews can look for the distressed aircraft. Flight plans are made to conform to certain ordinances, such as cities with noise limits that do not allow aircraft to fly overhead, or other airports where it is unsafe to fly directly over the airfield because of the risk of a mid-air collision. Other places that must be avoided are ‘No-Fly Zones’, where aircraft cannot come within a certain distance of a location, such as the White House, Capitol Building, or military installations.

The flight plan is created to take the aircraft on a route around these obstacles while keeping the flight as short and efficient as possible. The aircraft may deviate from the flight plan as long as it contacts air traffic control and gets permission, if there is inclement weather that is unsafe to fly through, or if it needs to cross another station’s airspace to make a faster route.

Another example of airway distance is longer flights spanning a large distance, such as an airliner traveling from New York to Paris, France. Instead of going straight along the lines of latitude to get to France, the airliner will make an arc and actually fly up towards Greenland and then come back down towards Europe. This is because the Earth is a sphere, and the airway distance between moving in an arc is shorter and more efficient than moving in a straight line. 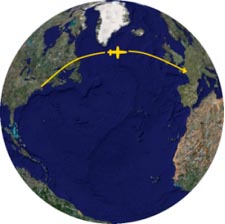