Airworthiness Directives (AD) are notifications or warnings to the owners and operators of a certified aircraft that there is a known safety deficiency associated with the aircraft. This deficiency could be in the body, engine, avionics, or other systems on the aircraft. When there is an outstanding airworthiness directive present on an aircraft, that aircraft is considered not airworthy (a violation of 14 CFR part 39.7). Also contained in an AD is a date or aircraft flying hours which mandates that the owner must comply with the directives by that certain time or total hours.

The primary purpose of Airworthiness Directives is to notify aircraft owners of the following:

The certificate is issued by the civil aviation regulatory authority of the country where the aircraft is registered. In the United States, this organization would be the Federal Aviation Administration (FAA). The Civil Aviation Safety Authority issues certificates for Australia, the European Aviation Safety Agency and Joint Aviation Authorities for Europe, and Transport Canada for Canada.

With that said, the FAA issues three types of ADs in the United States. They are a Notice of Proposed Rulemaking (NPRM) followed by a Final Rule; a Final Rule with a Request for Comments; and an Emergency AD. The standard process of issuing these directives starts with the discovery of an unsafe condition. An NPRM is published with a specific comment period after this discovery. The final rule must be prepared as this period closes. Aviation Safety Engineers (ASEs), under the FAA Aircraft Certification Service, are the people responsible for determining whether an unsafe condition exists and if an AD is needed. 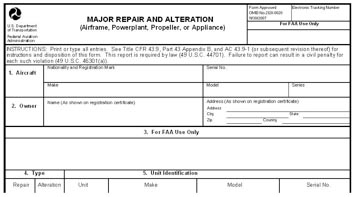