Paramount Business Jets provides the safest private jets at the best prices for all private aircraft charter services to and from Dulles International Airport.

Dulles International Airport is open 24 hours every day. The airport is located about 26 miles (42 kilometers) west of the center of Washington, D.C., at 1 Saarinen Circle, Chantilly, Virginia 20041.

Private jets available for charter to and from Dulles International Airport include the Citation CJ3, Hawker 400 XP and Learjet 35A light jets; the Gulfstream G150 and Learjet 60 midsize jets, and the Challenger 604 and Falcon 900B large jets.

Private Jet Charter to and from Dulles International Airport

Washington Dulles International Airport is the largest airport in the metropolitan area of the nation’s capital. It provides easy access to not only the District of Columbia but also to Baltimore, northern Virginia and the Shenandoah Valley.

Dulles is the most popular destination for private jet charter flights even though elite travelers have their choice of several D.C. area airp 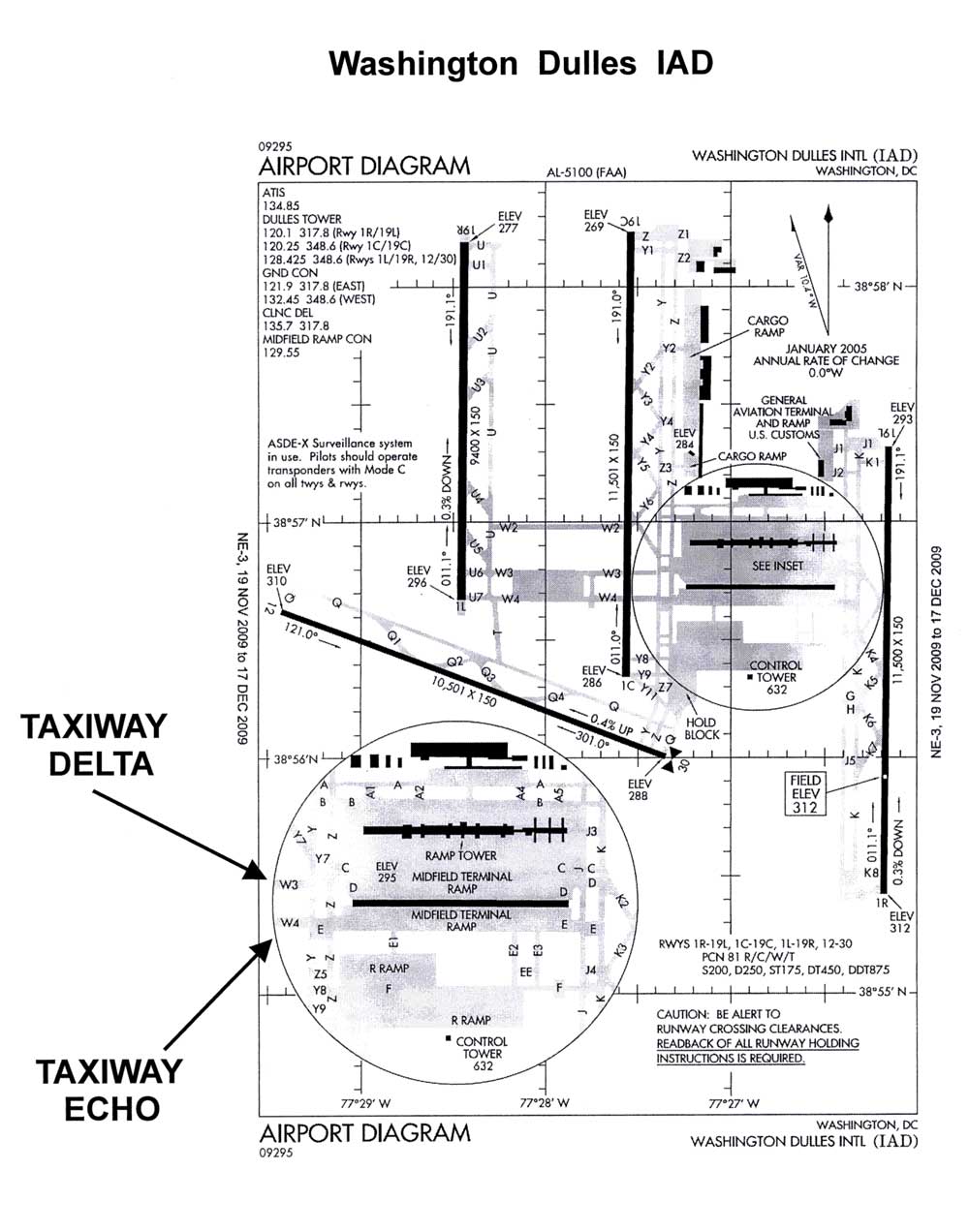 What is Washington Dulles airport code?

Dulles International Airport (the word “Washington” was later added) opened in Virginia in 1962 on 10,000 acres of land 27 miles west of downtown Washington, D.C.

Most of the airport is situated in Dulles in Loudoun County but a small portion is located in Chantilly in Fairfax County.

It was named after John Foster Dulles, Secretary of State from 1953 to 1959 under President Dwight D. Eisenhower.

There are some 140 gates in a main terminal and two midfield terminal buildings for commercial flights.

There are also two private fixed base operator terminals that serve private jets.

Why hire a private jet to IAD?

There are two private terminals at Washington Dulles International that are served by two FBOs, Jet Aviation and Signature Flight Support.

Both terminals have flight planning rooms and executive conference rooms.

Jet Aviation, which operates out of a recently renovated 84,000 square foot terminal northwest of the main terminal, has six hangars and 10 acres of ramp space. Jet Aviation is a recent addition to Washington Dulles, acquiring the Ross Aviation FBO in 2017.

Customs and immigration clearance are available in its remodeled terminal, which has a VIP lounge and on-site car rental.

Jet Aviation, which operates worldwide, has nine locations in the United States.

Signature Flight Support, called Signature IAD at Dulles, operates out of a 67,000 square foot terminal on the east side of the airport, near the Dulles Jet Center.

Signature gets interesting online raves from its customers. One passenger, who had been expecting to find her car dreadfully covered in snow upon her middle-of-the-night return to Dulles, found instead her car – and every car in the parking lot – cleared of snow, thanks to a Signature employee.

Another customer raves about a chocolate-chip-cookie-carrying valet greeting him curbside and leading him to his limousine in which the seat-warmers had been turned on and made for a cozy arrival.

By the way, flights between Washington Dulles and Teterboro in Bergen County, N.J., are the second most traveled by private jets. The only busiest short route that carries passengers on private jets is the one between Los Angeles and Las Vegas.

Dulles Jet Center, located just north of the Signature Terminal, is a secure place to park your private jet.

With its 300,000 square feet of ramp parking, private jets can be parked without crowding.

The four hangars at the Dulles Jet Center have amenities that include:

Why is Dulles so far from D.C.? 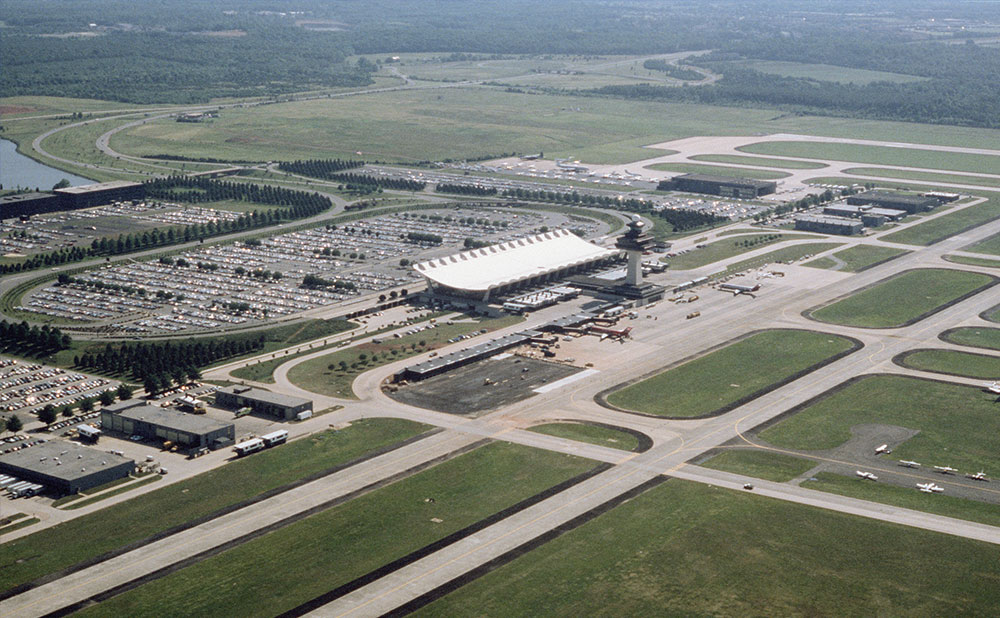 After World War II, when it was determined that a second airport was needed to serve the Washington, D.C., area, Congress passed the Washington Airport Act of 1950 to provide for one.

The immense size of the parcel of land – 18 square miles – allows a huge airport to be built buffered from neighbors. Right now, only about half of it is being used for aircraft operation.

It was the first airport in the country to be designed specifically for commercial jets.

There are five concourses at Washington Dulles and four runways, three of which opened when the airport did in 1962, the fourth added in 2008. A planned fifth runway has not yet been scheduled for construction.

Is there a train into Washington, D.C.?

Most people who charter a private jet into Washington Dulles have transportation from the airport lined up. However, some would take the Metro rail line into the city if it extended out that far.

The good news is that it will be extended that far. The bad news is not until 2020.

Seems the area President Eisenhower chose 60 years ago isn’t as remote as it used to be and residents there fought the extension of the Metro line for years. It’s not that they didn’t want it, they just didn’t want it in their backyard.

Called the Dulles Corridor Metrorail Project, the 23-mile extension of the existing railway system was to be built in two phases. The first phase, connecting East Falls Church and Tysons Corner, opened in 2014.

The second phase, which began in 2014, will run from Reston to Washington Dulles International Airport.

When it is done, it will be called the Silver Line.

Some people come to Washington, D.C., just to see the sites and museums around the nation’s capital. Others hire private jets to Washington Dulles International Airport for specific events, such as:

You can also charter a private jet into IAD to get to Northern Virginia’s Technology Corridor, which Atlantic Magazine has dubbed “Silicon Valley of the East.”

Its proximity to Washington, D.C., makes it the perfect spot for governmental-related defense, internet, tech and telecom companies. Eight Fortune 500 companies have headquarters in Fairfax County, in which a portion of Washington Dulles is located.

Washington Dulles International Airport (IAD) was opened more than half a century ago. In that time, it has moved into our top 10 most requested airports in terms of private jet charter.

As the capital of the United States, it stands to reason that Washington’s Dulles International Airport will continue to enjoy a place as one of the most frequented US airports for private jet charter. Natural beauty, famous produce and seafood, and world-leading technology companies such as Microsoft all add to the huge appeal of Washington. And, with so many major players operating in the capital, it’s only natural that there are a high number of private jets flying in and out of Dulles International Airport.