Paramount Business Jets provides the safest private jets at the best prices for all private aircraft charter services to and from Mandelieu Airport.

Private jets available for charter to and from Cannes -- Mandelieu Airport include the Piaggio Avanti, Hawker 400XP and Citation Bravo light jets; and the Falcon 900EX, Challenger 605 and Gulfstream IV large jets.

Because of its modest size and infrequent passenger flights, Cannes -- Mandelieu Airport lacks the amenities of a commercial service airport. Private jet charter flyers can, however, opt for vehicle-to-plane ramp access and luxury ground transportation services.

Private Jet Charter to and from Mandelieu Airport

The French Riviera is synonymous with luxury and Cannes-Mandelieu Airport is the place to land the luxurious private charter business jets that carry elite travelers to the Côte d’Azur. 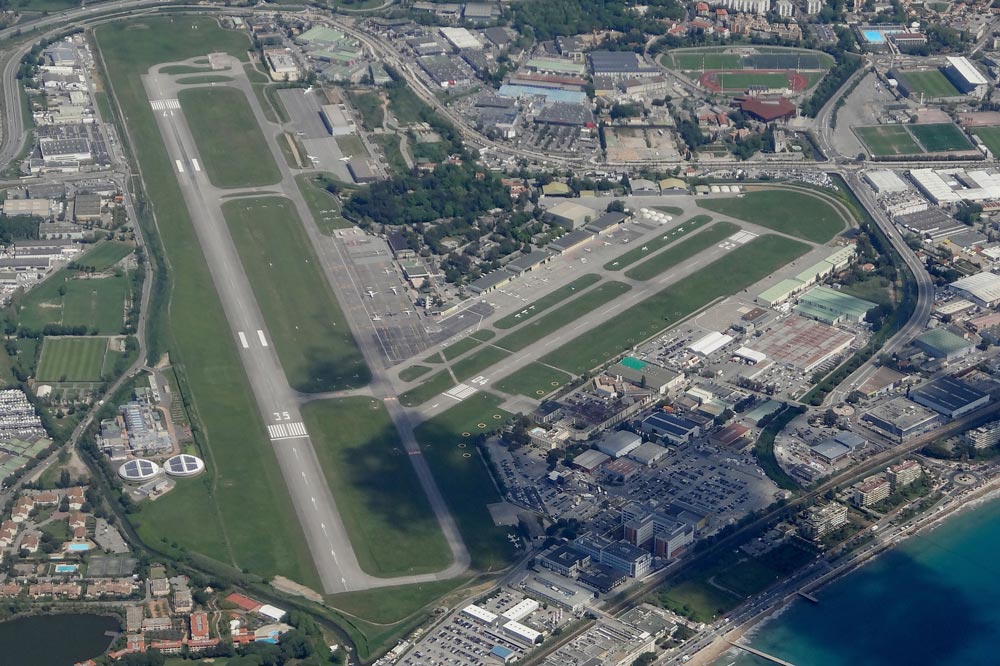 Unlike the Nice-Côte d’Azur Airport, which handles the hoi polloi traveling on commercial airliners, the Cannes-Mandelieu Airport, once the main commercial airport in the region, is now a strictly private jet airport using its two runways -- one over 5,200 feet long; the other, just under 2,500 feet long.

Cannes-Mandelieu Airport, located in the heart of the French Riviera, is respected in the world of business aviation. It has a reputation for top-of-the-line service and discreetness for its elite private charter jet passengers.

Both airports, by the way, are controlled by the same company, Aéroports de la Côte d’Azur (ACA), which also operates the La Môle – Saint-Tropez Airport.

Why is the French Riviera also called the Cote d'Azur?

The literal translation of the French Côte d’Azur is Azure Coast.

There are many reasons proffered as to why the Côte d’Azur region became popularly known as the French Riviera but the one that seems to make the most sense is that it is, in essence, an extension of the Italian Riviera.

What is Cannes-Mandelieu’s airport code?

Why hire a private jet to Cannes-Mandelieu? 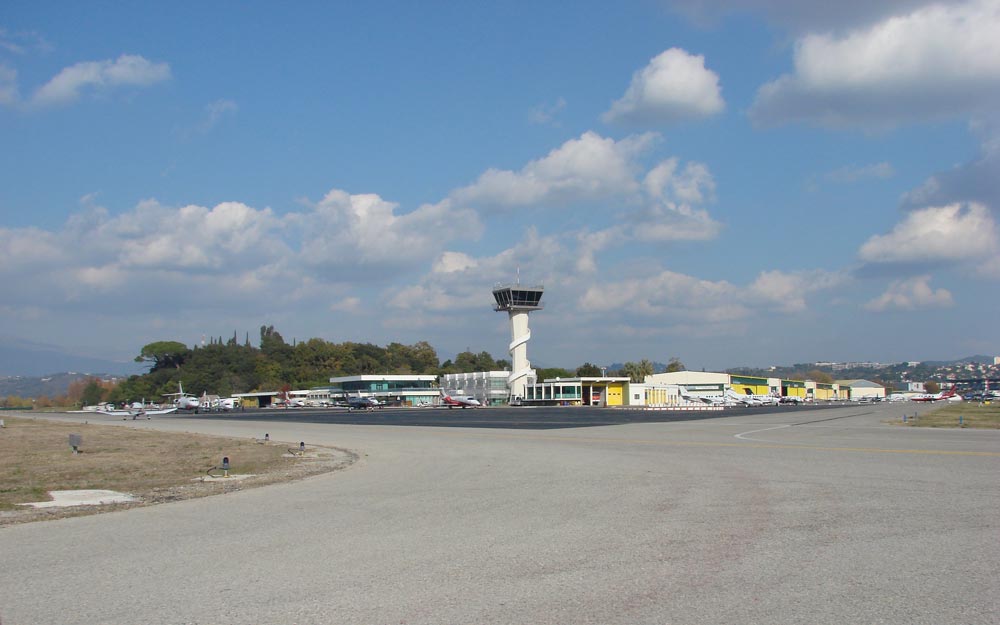 Cannes-Mandelieu Airport is one of the gateways into the French Riviera, the vacationland of the rich and famous along the southeast coast of France that lies on the Mediterranean Sea.

The French Riviera is not only a beautiful place, it’s a place where the sun almost always shines – more than 300 days a year.

The largest city in the region, Nice, with a population of about 350,000, also has the region’s largest airport, the third busiest in France. But, even an airport that big can’t sufficiently handle all the needs of private business and charter jet passengers that flock to the southern tip of France during busy times of the year.

The French Riviera becomes one of Europe’s most popular destination for private charter jets in the summer and during VIP events like the Cannes Festival and the Monaco Grand Prix.

And, without a doubt, the most luxurious way to get there is on a private charter jet, rented through brokers like Paramount Business Jets whose job is to get you there in style.

A luxury destination requires a luxury airport for its inhabitants and visitors – and that would be Cannes-Mandelieu Airport, which is exclusively for business aviation.

Located just 3 miles west of Cannes in the Alpes-Maritimes department, is able to devote all its energies into handling small and medium private jets. The result is faster service provided with more discretion than a private charter jet passenger would get at the larger Nice Airport. (Nice is also farther -- 15 miles from Cannes – away than Cannes-Mandelieu Airport is.)

Quick departures and arrivals are almost guaranteed. It’s easy to get to the airport by car and those cars can park just feet from the doors. Passengers can arrive just a few minutes before takeoff.

The airport also handles helicopter transfers to get its passengers directly to their destination. It provides “edge to edge” service, which means a helicopter can be waiting for you when you step off your jet to take you to places like Monaco or Saint Tropez.

A couple things to keep in mind: helicopters are in very high demand during busy times – like the Cannes Festival and the Monaco Grand Prix – so it’s important to book them early. Also, Cannes airport is not open 24 hours a day. The hours are available on its website.

What makes Cannes-Mandelieu such a good airport? 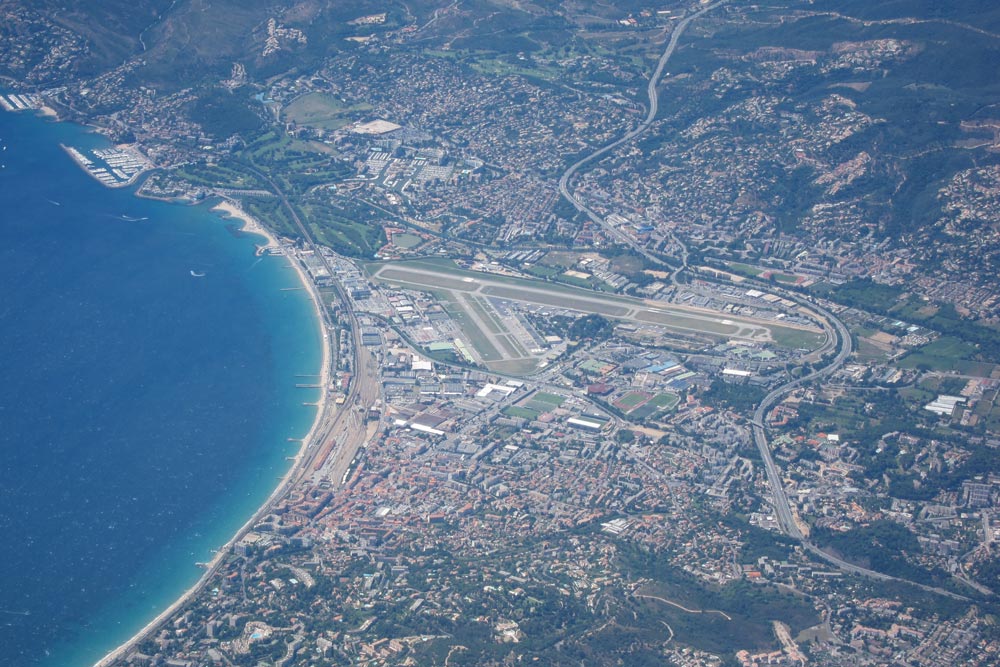 The Cannes-Mandelieu Airport is located between the Estérel Massif coastal mountain range and the shimmering and yacht-filled Bay of Cannes. It prides itself in being the second most important general aviation airport in France with “a dynamic platform that is highly attentive to customer needs and offers every convenience: high safety standards, rapid passenger handling, free parking in the immediate vicinity of the terminal, tailored services, and a polished welcome that is both friendly and professional.”

The airport lists its strengths as being:

When did the airport open?

The airport has an interesting history.

It was built by private individuals in 1930 but, like many European airports, was taken over by the government before World War II. In 1937, it was the only airport in the French Riviera. It was partially destroyed during the war but was rebuilt.

As commercial aviation grew, larger and larger commercial planes needed a spot to land. The hills around Cannes made it an almost impossible landing site for big jets. That’s when the Nice Airport was built, taking the large scheduled commercial flights and leaving Cannes-Mandelieu to handle smaller business jets and private charter jets as well as providing a hub for business and tourism on the French Riviera.

Where exactly is the French Riviera?

The French Riviera, also known as the Côte d’Azur, extends east along the southern coast of France, from Toulon on the southern tip of France, up the east coast to the Italian border. The Riviera has more than 70 miles of coastline, many cities, Roman ruins and some 14 parks. Visitors can go whale-watching or stroll through medieval villages.

What cities are on the same latitude as the French Riviera?

Cannes is located on the 43rd parallel north, the same latitude as other big cities around the world, including, Toronto, Ontario, Canada; Boise, Idaho, United States; Sarajevo, Bosnia and Herzegovina; Takikawa, Japan; and Florence, Italy.

Some facts about Cannes

It’s not hard to believe that Cannes, a playground for the rich and famous on the Mediterranean Sea, started out centuries ago as a little fishing village.

Cannes has a dry summer climate with low rainfall in the winter and dry, hot weather in the summer. In the summer, there is 11 hours of sunshine a day and an average temperature of 77 degrees (although mid-day highs can reach almost 90 degrees. It is warm there from June to September, which makes it the busiest time of the year. However, winter remains a best-kept secret with temperatures only dropping into the 50’s.

With a current population of about 75,000, Cannes is located in the Alpes-Maritimes department, and probably best known as the host city for the annual Cannes Festival, with 2018 marking its 71st appearance.

City officials came up with the idea of hosting a film festival shortly before World War II. It wanted to hold an impartial contest and it thought other film festivals at the time did not. The first Cannes Film Festival was held in 1946.

Eight miles north, in the hills above Cannes, is Sophia Antipolis Park, which is called the Silicon Valley of Europe. The technology complex, founded in 1969 by French Senator Pierre Laffitte, brings together researchers, professors and companies for innovation. According to figures provided by the city of Sophia Antipolis in 2016, the tech park is the workplace of 4,500 researchers, 5,500 students and 2,230 companies that employ almost 40,000 people from 63 countries.

Sophia Antipolis Park turned the area from just a tourist destination to a destination for business, trade and aviation conferences.

Things to do and see

The region in France in which the French Riviera was changed in 2017. The Provence-Alpes-Côte d'Azur region (nicknamed PACA) was deemed by officials as being too hard to pronounce and also not quite cool enough for the area it described -- the region that stretches from the French Riviera up into the high Alps.

So, now it is called simply “Region Sud (South).”

“Our territory is the sun, the sea, the mountains, the good living. It was essential to give our region a name that values all our assets: the south,” the president of the region, Renaud Muselier, tweeted after the regional council unanimously voted to change the name.