Paramount Business Jets provides the safest private jets at the best prices for all private aircraft charter services to and from Cote D Azur Airport.

Nice Cote d’Azur Airport offers restricted 24-hour access to flyers. The airport is located about 4 miles (6.5 kilometers) southwest of the city of Nice in the Alpes-Martimies department of France, at Rue Costes et Bellonte, 06206 Nice, France.

Private jets available for charter to and from Nice Cote d’Azur Airport include the Piaggio Avanti II turboprop, the Citation CJ2+ light jet, the Gulfstream G150 and Hawker 900XP midsize jets, and the Gulfstream G450 and Legacy 650 large jets.

Private Jet Charter to and from Cote D Azur Airport

The French Riviera, long the playground of the rich and famous, lies along the northern coast of the Mediterranean Sea near the coast of Italy. 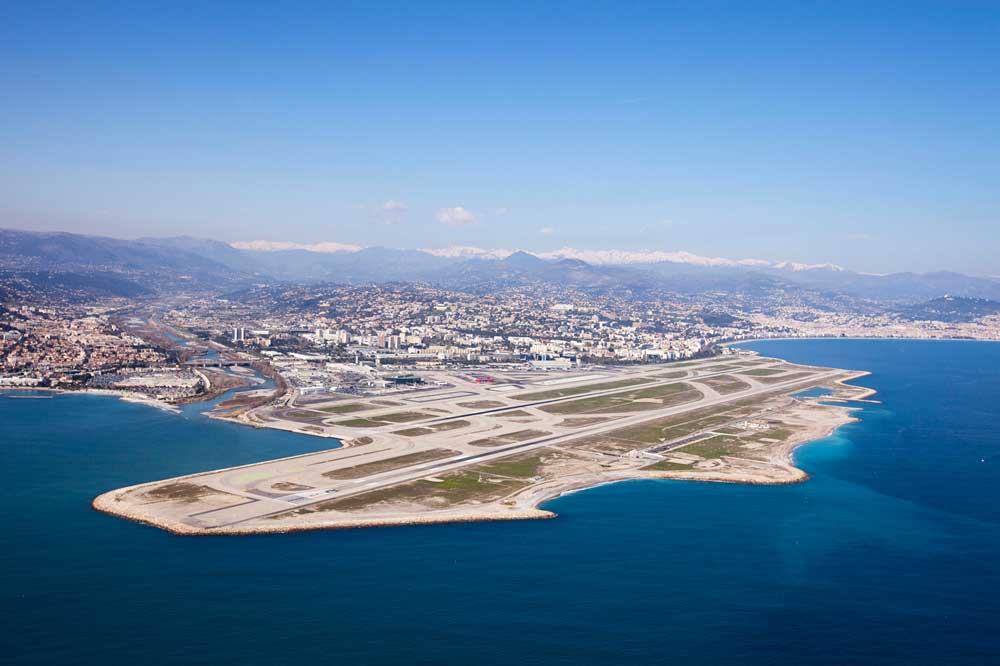 The Nice Côte d’Azur Airport is the main point of arrival for visitors to the glamorous French Riviera.

The Nice Côte d’Azur Airport, located in the southwest portion of the city, is the main point of arrival for visitors to the glamorous French Riviera. Although it’s located in Nice, it is also the main airport for Cannes, which is 20 miles southwest and Monaco, which is 14 miles east. Although driving distances are short, helicopter service is also available to elite travelers in a hurry.

More than 10 million air passengers fly in and out of Nice Côte d’Azur (“Blue Coast”), the third largest airport in France, every year. They are drawn, as they have always been, by an almost ideal climate with plenty of sun almost every day of the year and summer highs of about 86 degrees and winter lows of about 50 degrees.

The view is breathtaking for visitors about to land on the runways at Nice.

The Cote d’Azur Airport offers easy access by private charter jet to Monaco, St. Tropez, the Antibes and other attractions in the Provence region. The famous Promenade des Anglais with its historic architecture has many cultural and dining destinations along the sands - and pebbles - of the beach.

Nice has had a place in aviation history dating back to 1910 when its airshow drew large crowds.
Air shows continued as postal flights between Nice and Corsica began in 1918. Nice Cote d’Azur Airport was commissioned by the Air Ministry of France and privately run in the late 1920s. It became a government airport in 1937.

Like most strategic airfields, Côte d’Azur Airport was used during the military in the two World Wars.

Major development began after the wars with the installation of a hard-surface runway in the 1940s. That opened up flight service to Paris, which is 420 miles northwest. 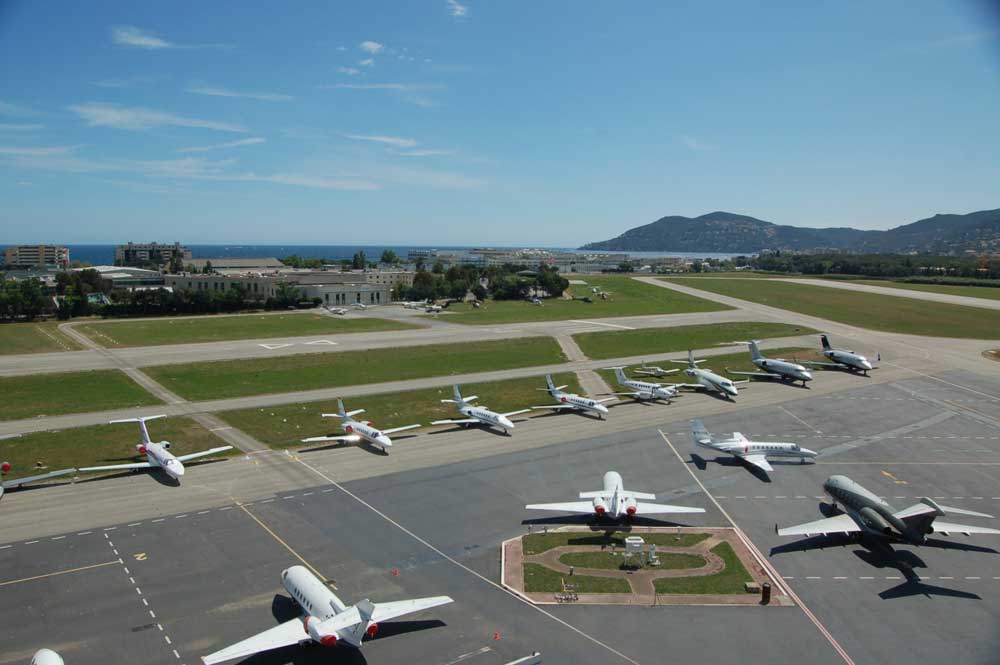 Improvements have been made to the airport to allow more and bigger jets to land with the growing number of tourists.

By 1960, a million passengers a year flew in and out of Nice. Since that time, improvements have been made to the airport to allow more and bigger jets to land with the growing number of tourists.

The busy airport added a second runway in 1978 when it reclaimed land by dredging and back-filling the sea.

And the airport keeps breaking records, growing every year. More than 13 million people came through “the gateway to the Riviera” in 2017. The airport attributes the growth to improvements in the quality and speed of service provided to its passengers. 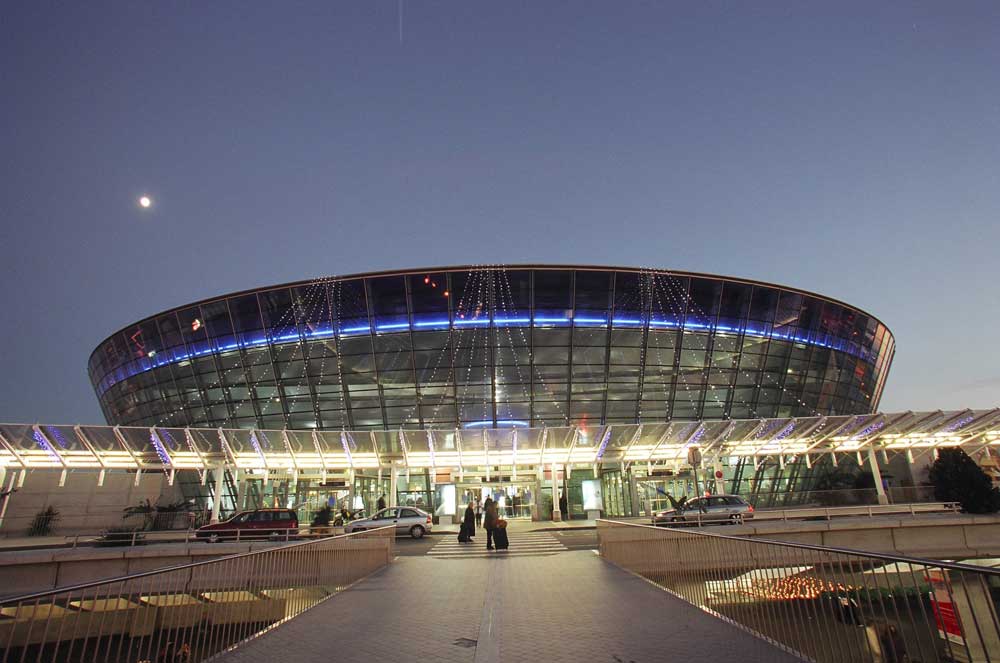 The airport has its mission statement on its website:

What is the airport code for Nice Côte d’Azur Airport?

How can I hire a private charter jet to Nice?

Paramount Business Jets and other private charter jet companies can arrange flights into and out of the heart of the French Riviera.

What is the Villefranche-sur-Mer?

The Villefranche-sur-Mer is a resort town between Nice and Monaco that has been used in the filming of several famous films, including “To Catch a Thief,” “Never Say Never Again,” “The Jewel of the Nile” and “Dirty Rotten Scoundrels with Steve Martin.” The resort was also used by the Rolling Stones when they recorded “Exile on Main Street.” The deep water off Villefranche is used as a mooring spot by luxury cruise liners.

Villefranche is a strategic port city that has been fought over - and changed hands - many times since the ancient Greeks and Romans used the harbor as a stopover. Villefranche had been under the rule of Italy, Turkey, Sardinia and Savoy before being given back to France in 1860. Since then, it has been the winter home of royalty and the extremely wealthy. Villa Leopolda, built by King Leopold of Belgium on the hills above Villefranche, was once considered the most expensive house in the world. It is rumored to be owned or to have recently been owed by Bill Gates.

What celebrities live on the French Riviera?

Elton John has a villa in Nice. The knighted British singer Elton John’s summer home is an estate built in the 1920s that is perched on a hill high above Nice with views of the Alps and the bay area.

Bono has an estate in Eze-Sur-Mer. U2 singer Bono has had a place on the French Riviera since the early 1990s when, it has been reported, he paid almost $6 million for a place to entertain pals like Cindy Crawford and George Clooney.

Brad Pitt and Angelina Jolie, the now-divorced power couple, continue to jointly run the Miraval Vineyard at the Chateau Miraval, an enormous chateau surrounded by a moat and a vineyard on 1,200 acres. The couple bought the estate in 2011 for $60 million.

Microsoft Billionaire Paul Allen has several swanky digs including a lavish hilltop mansion, The Villa Maryland, in St. Jean Cap-Ferrat. It has been reported that he has a year-round full-time staff of 12 to take care of the property. Who lives nearby? Bono and Andrew Lloyd Webber.

Things to do and see in Nice

The city of Nice on the French Riviera is filled with beautiful architecture, beaches, flower shops and artwork of every kind.