Paramount Business Jets provides the safest private jets at the best prices for all private aircraft charter services to and from Scottsdale Airport.

Private jets available for charter to and from Scottsdale Airport include the Learjet 35A, Beechjet 400A and Hawker 400XP light jets; the Falcon 20, Hawker 800 and Learjet 55 midsize jets; and the Falcon 2000, Gulfstream G450 and Challenger 604 large jets.

Private Jet Charter to and from Scottsdale Airport

Charter a private jet into Scottsdale – often ranked as one of the best places to live in the United States – to play golf, visit a spa, go hiking through the desert or visit Old Town where 1920s era buildings and 19th century olive trees line the streets.

It’s an airport where pilots seldom have to worry about flying conditions. Scottsdale has an average temperature of 73 degrees and an average annual rainfall of just over 10 inches. Abundant sunshine means that pilots can land and take off about 360 days a year using Visual Flight Rules.

As a general aviation reliever facility, Scottsdale has no commercial commuter or airline service and is home to many of the area's corporate aircraft.

What is the airport code for Scottsdale Airport?

The ICAO code for Scottsdale Airport is KSDL and its IATA code is SDL.

U.S. Customs service is available at the airport every day from 9 a.m. to 7 p.m. Direct flights to Ronald Reagan Washington National Airport (DCA) are available through Signature Flight Support. 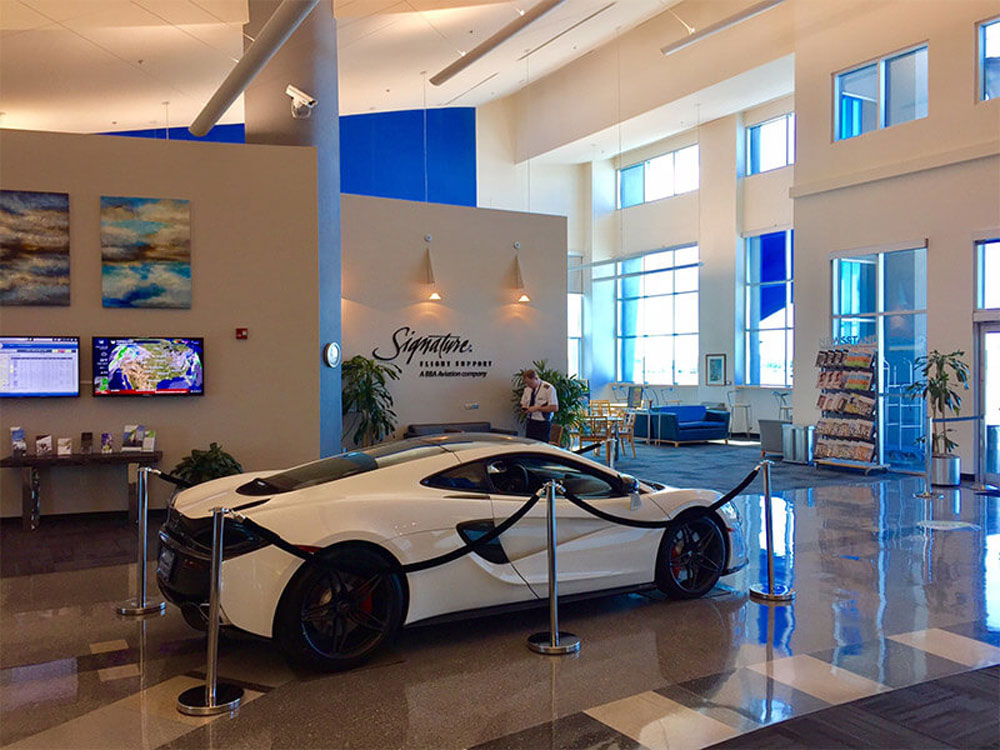 Signature Flight Support is the world's largest network of fixed base operations with over 200 locations around the world.

Signature was drawn to Scottsdale’s year-round warm weather and abundant sunshine just as tourists are. Downtown Scottsdale is ranked as Arizona’s finest urban center with its some 100 restaurants, 300 shops and 80 art galleries.

Signature’s amenities at Scottsdale include:

Scottsdale Airport is one of seven fixed base operation locations that Ross Aviation has in the United States. Ross Aviation acquired its first FBO in 1992. Ross says it’s “a relatively new name on the FBO playing field, however, the company's executive team brings over 100 years of hands-on experience in identifying and acquiring opportunities, solving problems, fostering growth and creating value in the FBO industry.”

Ross can handle general aviation aircraft up to a Global Express in Scottsdale.

Its services and amenities include:

The Redevelopment of SDL

In the summer of 2018, the existing airport terminal building and the adjacent aviation business center were demolished and replaced with the new Aviation Business Center.

The new building includes the Volanti Restaurant and Lounge on the second level. There is an outdoor patio where diners can look out over the airfield and the McDowell Sonoran Preserve Mountains. A banquet room offers plenty of room for events to be held at the restaurant.

A plaza with the Thunderbird Field II Veterans Memorial is in front of the building. There is also an event venue for business meetings and events.

A lot of planning went into the redevelopment of the Scottsdale Airport to fully maximize the limited area available for the airport between the mountains.

The airport master plan found that the most immediate need at Scottsdale Airport was more executive hangar space so that was the first project tackled.

Gemini Air Group hangars, which are able to accommodate aircraft up to a Gulfstream 650, Falcon 7x or Global Express, are now open. The two hangars are about 30,000 square feet and have direct runway access and 28-foot doors.

There are plenty of reasons to hire a private jet into SDL but most people would agree that despite all its other draws, the one word Scottsdale is synonymous with is “golf.”

PGA’s TPC Scottsdale is where the Waste Management Phoenix Open is played every year in early February.

Located in the Sonoran Desert that is surrounded by the McDowell Mountains, TPC Scottsdale is the only PGA Tour property in Arizona and the Phoenix Waste Management tournament is the state’s only U.S. Open. There are two championship courses at TPC Scottsdale, the world famous Stadium Course – with its large and raucous 16th hole bleachers -- and the Champions Course.

The Stadium Course was designed by Jay Morrish and Tom Weiskopf specifically to serve as the course that would become the site of the largest spectator golf event in the world.

Not interested in golf? Or looking for something to do when not playing or watching golf? Charter a private jet into Scottsdale to bask in its 300 days of sunshine a year or to enjoy the beauty of the desert hiking the trails that wind through the McDowell Sonoran Preserve.

Scottsdale Airport was called Thunderbird Field II when it opened in 1942 as a training facility for World War II Army Air Corps pilots.

Before being deactivated two years later, Thunderbird Field II turned a small piece of isolated desert into one of the Army Air Corps primary training schools.

While in operation, Thunderbird II got a reputation as an elite training facility as the number of cadets that came there for training increased as the war escalated. The number of pilots trained at Thunderbird Field II reached its peak in November 1943 when 615 cadets “graduated” after -- over a 10-week period – taking 65 hours of flight training and 109 hours of ground schooling.

The Arizona Conference of Seventh Day Adventists bought Scottsdale Airport in 1953 and turned it into Thunderbird Academy. The barracks were turned into dormitories. Hangars were turned into woodworking and mechanical shops for the students. The airfield itself was used to train missionary pilots until the city of Scottsdale, today’s owner of the airport, bought the airfield portion of the academy property in 1966.

The first FBO was selected in April 1967 and the first business jets landed at Scottsdale Airport four months later. By the end of 1969, 127 aircraft and 20 helicopters were based at SDL.

Today, Scottsdale Airport is one of the premier corporate jet facilities in Arizona with both of the airport’s fixed base operators ranked by pilots as one of the Top 50 in the country.

Scottsdale Airport facilities are located on more than 300 acres of land in the north central part of Scottsdale.

More than 30 companies are headquartered in Commerce Airpark (also known as Scottsdale Airpark), the 2,600-acre commercial and industrial area surrounding the airport. In addition, some 2,500 small and medium-sized businesses are located there. The total number of jobs at the airport and airpark are close to 50,000, including more than 1,400 aviation-related jobs, according to the City of Scottsdale’s Economic Benefit Analysis of 2014. These companies draw general aviation and corporate business travelers from all over the country to Scottsdale for business and tourism. Its first tenant, Casa Precision, moved into the airpark in 1968.

In 2018, some 460 aircraft – from single-engine recreational planes to luxurious corporate jets – were based at Scottsdale Airport.

Scottsdale Airport’s single runway doesn’t seem to slow its traffic, growth or importance. There were some 168,000 takeoffs and landings in 2017, more than many general aviation airports with multiple runways.

In 2018, a new Aviation Business Center was built at the airport featuring a Stearman, historic aircraft similar to those flown during WWII. It is the centerpiece of the Thunderbird Field II Veterans Memorial that is meant to remind visitors of the reason the airport was built and to pay tribute to Army Air Corps veterans trained there.

The City of Scottsdale Aviation Department, which employs 14 people, is responsible for overseeing everything at the airport. It is responsible for safety and security at the facility, including responsibility for runways, taxiways and lighting. It also oversees noise abatement and land development around the airport.

The airport can accept aircraft weighing up to 75,000 pounds. Prior permission is needed for heavier aircraft.