Charter a Private Jet to the Fiesta Bowl

It’s Bowl Mania for football fans on and around the beginning of every new year. There are more than 40 NCAA bowl games but the best of the best compete in six major bowls, including the Fiesta Bowl in Arizona.

If you are lucky enough to have a ticket to the Fiesta Bowl, held at the University of Phoenix in Glendale, Paramount Business Jets can arrange a charter flight for you into any of the nearby airports, including:

Booking early has many advantages. Enter a few details below to start planning your private jet flight to the Fiesta Bowl.

The Fiesta Bowl was created to provide an automatic berth for the winner of the Western Athletic Conference, which felt slighted in bowl invitations

G. Homer Durham, then-president of Arizona State University, pitched the idea of an Arizona-based bowl game in 1968, the same year WAC champion Wyoming was not invited to a bowl.

Enter the first Fiesta Bowl – with an automatic berth for the WAC champion – in 1971. That automatic berth ended in 1978 when both Arizona and Arizona State left the WAC. (Today, the WAC does not even include football. The conference dropped the sport in 2012 after frustrating years of teams coming and going in the conference.) 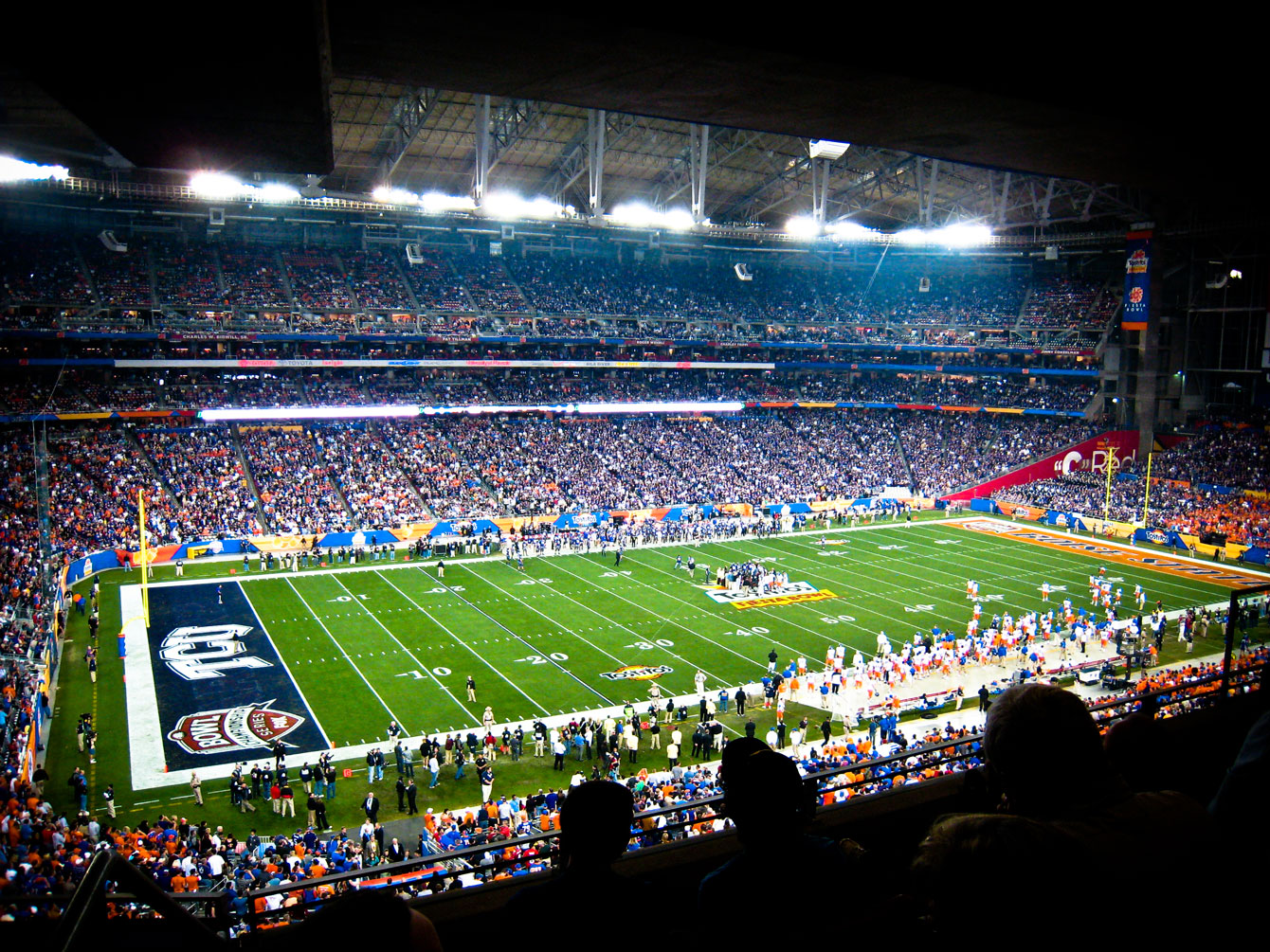 The national championship game is no longer in the rotation. It goes to the city that places the winning bid like the Super Bowl and the NCAA Final Four.

Many believe the 2007 Fiesta Bowl was one of the most exciting games in college football history. Heavily favored Oklahoma, taking on Boise State, scored 25 unanswered points to take the lead for the first time with a little over a minute remaining in the game. But Boise State was not to be denied. It’s famous “hook and lateral” play tied up the game and sent it into overtime. In overtime, Boise State went for a gutsy 2-point conversion attempt with a “Statue of Liberty” play and made it, winning the game.

How It Got Its Name

After getting officially sanctioned as a bowl site, it then had to determine a name for itself as it joined the Rose, Sugar, Orange, Cotton, and Peach bowls in the elite six of bowl games. So, in 1971, the Arizona Republic newspaper held a name-the-bowl contest. “Fiesta” was chosen on 73 of the 6,500 entries that were received. The contest winner, picked in a random drawing of the winning entries, got lifetime tickets to Fiesta Bowl games.

Ohio State, which has played in the Fiesta Bowl seven times, winning five and losing two, is the school with the most appearances. Eight other colleges have played in four or more Fiesta Bowls. They are:

To Do And See In Glendale