Paramount Business Jets provides the safest private jets at the best prices for all private aircraft charter services to and from Frankfurt Main Airport.

Private jets available for charter to and from Frankfurt am Main Airport include the Citation CJ4 light jet, the Learjet 60XR and Challenger 604 midsize jets, the Falcon 2000 EX and Legacy 600 large jets and the Global 5000 long-range business jet.

Frankfurt am Main Airport has four runways, three of which are arranged in an east–west direction and one in a north–south direction. The longest runway is 13,123 feet (4,000 meters) long.

Private Jet Charter to and from Frankfurt Main Airport

Paramount Business Jets offers private jet charter flights and luxury airliner charters to and from Frankfurt Main Airport. Frankfurt, Germany, conjures up thoughts of an international city with a majestic skyline and some of the best beer in the world.

But, for most of those who charter private jets into Frankfurt am Main International Airport, the city is first and foremost the financial center of continental Europe.

The city of Frankfurt am Main – its official name – is located on the Main River. It is home to the European Central Bank, the Deutsche Bundesbank and several other large banking institutions.

It is also the location of the Frankfurter Börse, Frankfurt Stock Exchange. Built in 1843, it is considered the 10th largest stock exchange in the world.

No matter the reason for visiting what has been affectionately nicknamed “the world’s smallest metropolis,” the easiest and most prestigious way to get there is to hire a private jet to Frankfurt Main International Airport.

What is the airport code for Frankfurt Main International Airport?

The ICAO code for Frankfurt Main is EDDF and its IATA code is FRA.

The General Aviation Terminal at EDDF is home to two fixed base operators, both of which are part of larger FBO networks. The GAT at Frankfurt Main International Airport is located on the south side of the airport, which is about seven miles from the center of Frankfurt.

Hire a private jet into EDDF

Frankfurt Main International Airport is not only the busiest commercial airport in Germany, the third busiest in Europe – behind London Heathrow Airport and Paris-Charles de Gaulle Airport – and the 14th busiest in the world with 65 million passengers in 2017, it is also among the Top 50 busiest business aviation airports in the world.

Meanwhile, the country of Germany, with its more than 100,000 private jet movements a year, is the second biggest business aviation market in Europe (behind France) with a 14 percent market share. Germany has the most private jet registrations in Europe.

It’s interesting to note that most – more than 50 percent – of private jet activity in Germany is domestic, from one German airport to another. The country has more than 300 German airports that can accommodate private or chartered business jets.

Paramount Business Jets is among the brokers that can spare you the hassle of a commercial flight and arrange a chartered private jet to or from Frankfurt Main from other cities in Germany or elsewhere.

Recognized as being one of three airports that took enormous leaps in private jet traffic between February 2017 and February 2018, Frankfurt moved into the Top 50 airports in the world for private and chartered business jets.

The allure of Frankfurt

Frankfurt has two personalities; it is the world’s smallest metropolis with a population of about 730,000 and Europe’s largest financial center. 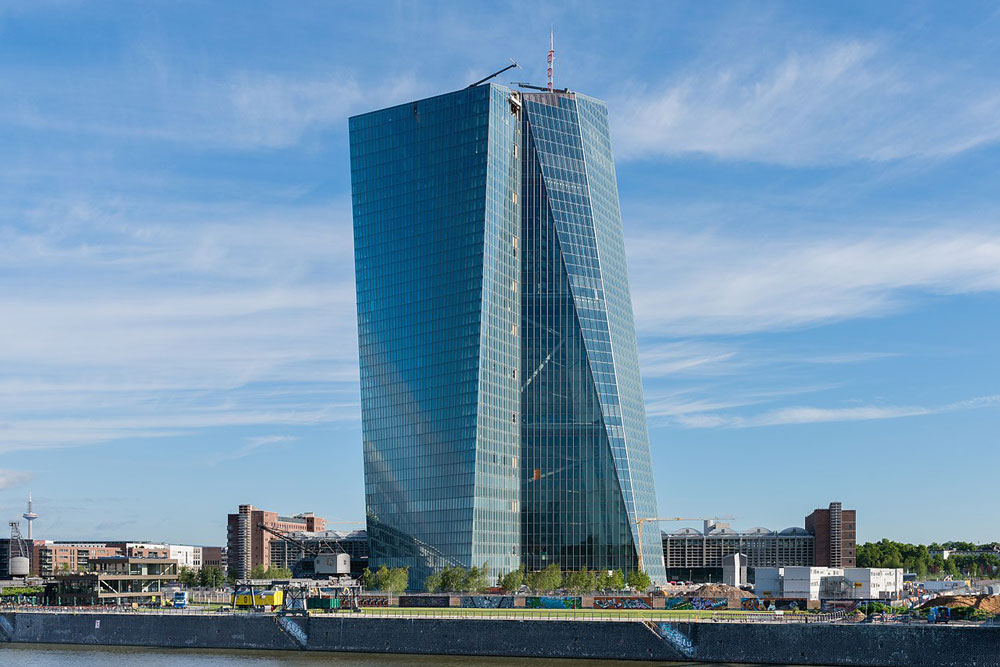 The city’s financial district draws thousands of foreigners to move to Frankfurt every year. More than a quarter of Frankfurt’s inhabitants were not born in Germany.

It is the place where business meets culture – and it is not unusual to walk down a street and hear many languages being spoken. It is liberal and multi-cultural.

In addition to its financial district, Frankfurt am Main has many other important business sectors, including information technology, biotechnology, automotive and pharmaceutical and chemical industries .

Charter a jet to a trade fair

Frankfurt am Main is a trade fair city. In fact, it may be where the business of trade shows began because fairs have been held in Frankfurt for more than 800 years.

Today, Messe Frankfurt, a government-owned event planner, is responsible for putting on trade shows and events in Frankfurt – and around the world. 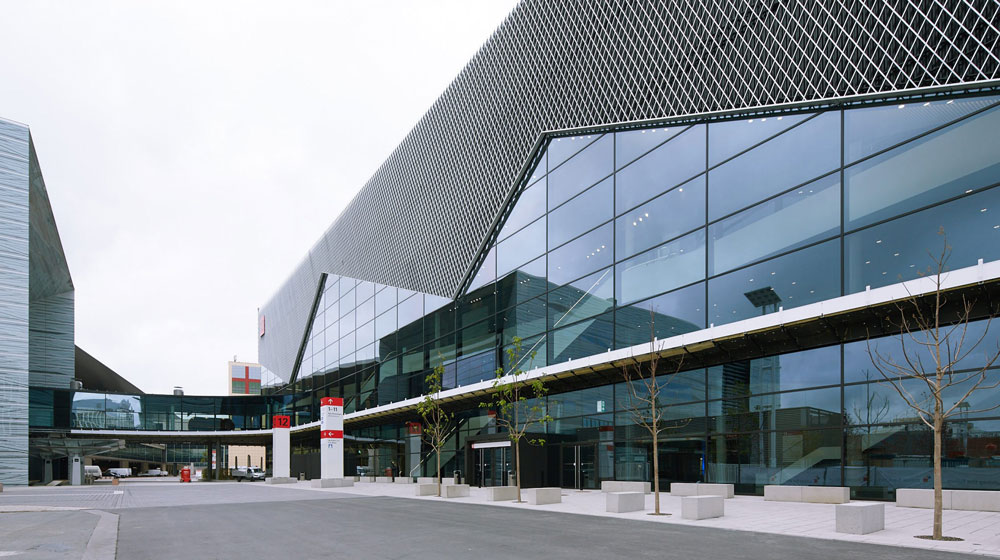 It is celebrating its 70th anniversary in 2018 but much has changed since that first Export Fair that was held in Frankfurt in October 1948. The autumn event, which was held annually, brought together buyers and sellers of just about anything and everything that could be bought and sold in Germany.

Wolfgang Marzin, president of Messe Frankfurt, a market leader in the international trade fair sector, dubbed the dividing up of events according to product sectors as the “Frankfurt principle.” The success of that practice, which started in the 1920s, proved that product areas were able to support themselves.

Messe Frankfurt found that focusing on individual industry sectors has allowed it to organize on its exhibition grounds many new and independent trade fairs such as the ones on its current schedule.

Messe Frankfurt, which has some 2,400 employees in 30 locations, is owned by the City of Frankfurt (60 percent) and the State of Hesse (40 percent).

The city hosts more than 30 industrial expos and fairs that attract millions of people – many on private jets – every year. They include large automobile, music industry and publishing shows.

The “Frankfurter Buchmesse,” the Frankfurt Book Fair, which is held over five days every October, is the world’s largest trade fair for books – both in terms of professionals and visitors.

In 2017, more than 7,000 book publishers, technology companies and multimedia representatives from more than 100 countries – as well as almost 300,000 visitors – attended the event. 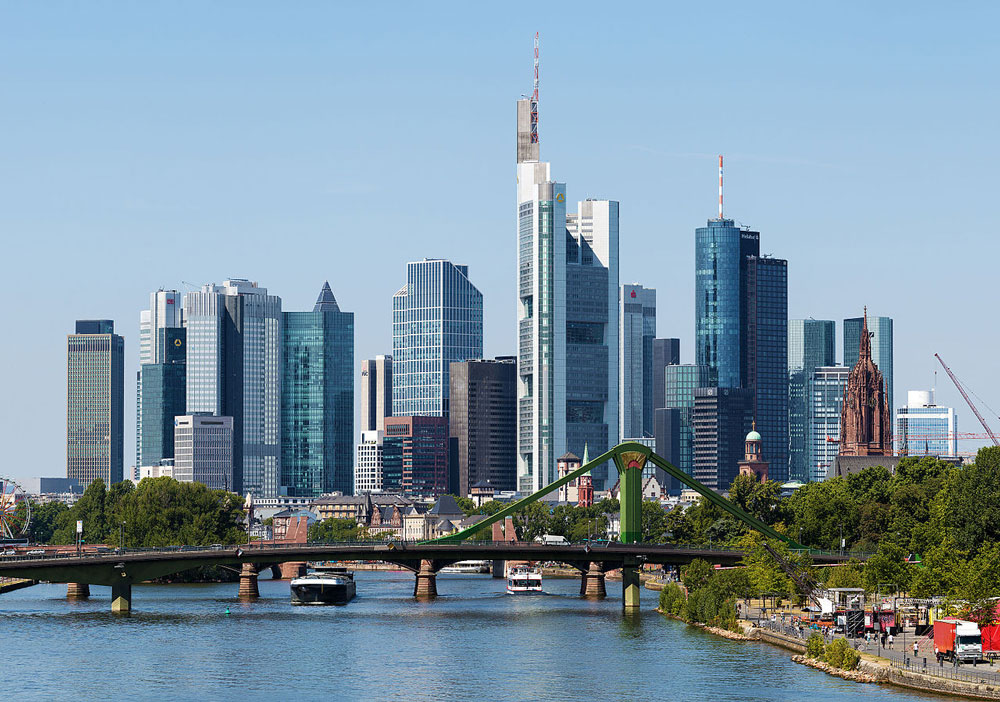 Fourteen of the 15 tallest building in Germany are in Frankfurt. (The other on is the Post Tower in Bonn.)

The tallest of these is the 853-foot Commerzbank tower. It was built in 1997.

Frankfurt’s cluster of high-rise buildings give it an impressive skyline that is unlike any other in Europe. In fact, it is sometimes referred to as Mainhattan, a portmanteau of New York’s Manhattan and Frankfurt’s Main River.

Frankfurt shares another of New York City’s traits. It has an inner-city forest. New York has Central Park and Frankfurt, one of the most densely populated cities in Germany, has the Stadtwald or “city forest.” Some 15 square miles, more than half its total area, are located in the city limits, making it one of the world’s largest urban forests.

More to Frankfurt than business

There is much to see in Frankfurt, including the “Museumsufer,” the area in which 11 museums line both banks of the Main River and dozens of others are located within walking distance on nearby streets.

If you go looking for the Frankfurter Börse, the Frankfurt Stock Exchange, you’ll be greeted by two bronze statues of a bull and a bear, symbols of the up and down of the market.

Now, about those hot dogs

Frankfurter has become the generic name for those long, thin, traditionally pork, smoked sausages. In Germany, they are served much as they are here, with bread, mustard and sometimes potato salad.

However, if you mean the frankfurters from Frankfurt, those are called “Frankfurter Würstchen.” Butchers outside the Frankfurt region have to call their hotdogs “Nach Frankfurter Art,” which means like a frankfurter, but not an original.

However, purists contend the frankfurter began in Vienna, the birthplace of the Vienna sausage and the city whose name would be morphed into the word “wiener.”