Paramount Business Jets provides the safest private jets at the best prices for all private aircraft charter services to and from Edmonton International Airport.

Edmonton International Airport is open 24 hours a day every day. It is located about 15 miles (24 kilometers) south of downtown Edmonton and 150 miles north of Calgary, at 1000 Airport Road, Edmonton, Alberta, Canada.

Edmonton International Airport offers a wide range of airport amenities. We will arrange services that are tailored to your needs such as a luxurious lounge or ramp access so your ground transportation can get you directly to and from the aircraft.

Private Jet Charter to and from Edmonton International Airport

The Cold Lake oil sands, located northeast of Edmonton, draw many executives and elite private jet travelers to Edmonton International Airport. Others come for the beauty and the outdoor sports of western Canada.

Edmonton, which is located on the North Saskatchewan River, is the capital of the Canadian province of Alberta. As the most northern large – population over a million - city in North America, it is known as the gateway to the north.

Edmonton is the perfect hopping on and off place for private jet charter clients who have projects in the Cold Lake oil sands, which are believed to contain some 370 billion barrels of the extra heavy oil that saturates the sand and sandstone around the city of Bonnyville.

It also draws VIPs in private jets that are involved in diamond mining in the Northwest Territories.

Edmonton Airports was established to help the economy prosper in the Edmonton Metro Region.

Edmonton International Airport is Canada’s fifth-busiest airport by passenger traffic and the largest major Canadian airport by land area. It has non-stop commercial flights to cities in Canada, the United States, Mexico, the Caribbean and Europe.

From farm to flight

The predecessor of Edmonton International opened as a flying school in 1927. Located northwest of downtown, that early Edmonton Airport was quick to become the city’s primary airport. It played an important part as a military airfield in World War II.

By the 1950s, it was apparent that the airport’s location near the city made growth almost impossible. There was no room to extend its runways, which, at 6,000 feet were only suitable for propeller planes. Jet airliners needed two-mile runways and terminals large enough to handle the more than 100 passengers the big jetliners carried.

So, a new site was found on which to build Edmonton International Airport. It was a 7,600-acre parcel of farmland near Leduc, which is 20 miles south of Edmonton.

There was just one slight problem. The farmland was actually being farmed and the sale agreement allowed the owners to keep farming it until the airport authority was ready to start building. Even today, more than half the land is still under cultivation.

Turning a farm into an airport was no easy task. Weeds keep taking over the construction area. The construction polluted surrounding farmland. Beavers kept building dams that flooded runways. And airport security, now used to guard against terrorists, then guarded against cattle and other animals wandering onto the runways.

But the airport authority made it happen. Edmonton International Airport opened in 1960 with a temporary terminal that used to be a hangar. A new 370,000 square foot terminal was built a couple of years later at a cost of $10 million.

During the 1970s and 1980s, Edmonton International Airport handled huge jets such as Boeing 747s and Lockheed 1011s that could carry as many as 400 passengers to Europe and elsewhere.

Meanwhile, smaller planes making shorter flights used a second airport closer to the city, the Edmonton Municipal Airport. That two-airport move created almost as many problems as it solved with connecting passenger traffic conflicts and noise complaints in the city.

So, in 1995, by a vote of the people of Edmonton, all commercial air traffic was routed through Edmonton International Airport with general aviation and private jets landing at both airports.

While the consolidation was considered a success, commercial traffic eventually outgrew Edmonton International Airport. A terminal designed for two and a half million passengers a year was handling almost four million by 1999, forcing the need for yet another expansion.

In the early 2000s, a $450 million expansion project added a new south terminal to take some of the pressure off the existing north terminal. A Central Hall was built for passenger screening, retail outlets and commuter travelers. To be able to handle the increased number of air shipments, a new cargo apron was built.

There are three fixed base operators at Edmonton International, Canada’s fifth busiest airport and Alberta’s busiest. They are:

Executive Flight Center is a full-service FBO with a private executive lounge for the discriminating private jet traveler. Its facility also has a large open passenger lobby, a flight planning room and the largest, secure heated hangar of the three FBOs at Edmonton. 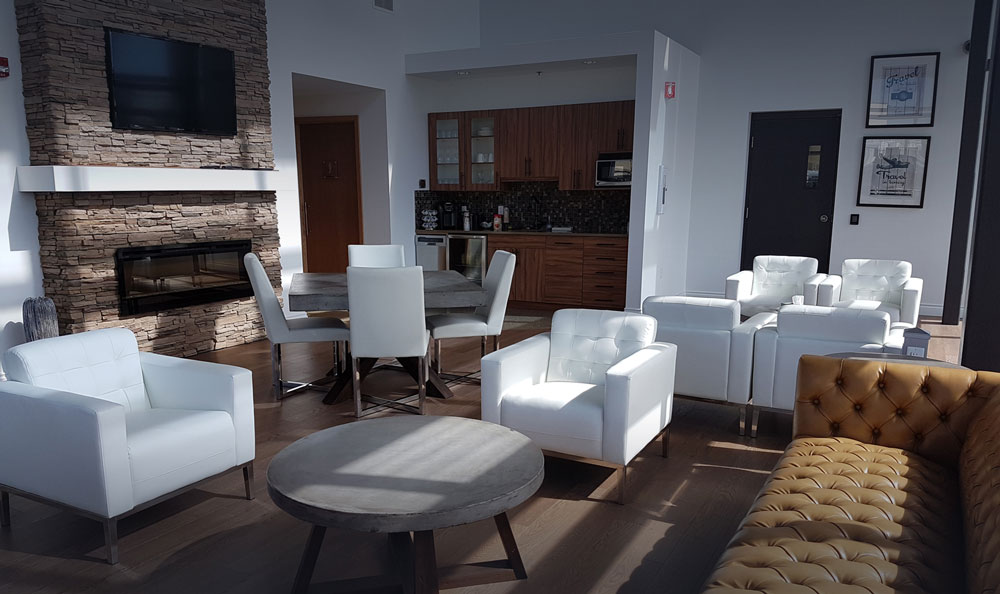 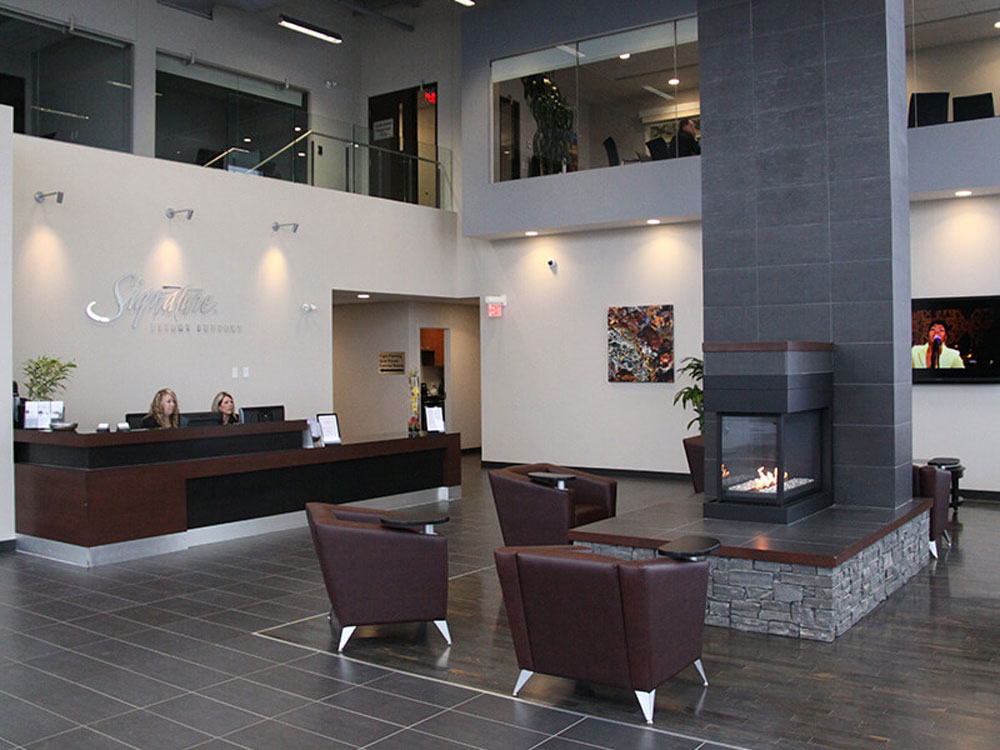 The Signature Flight Support FBO at Edmonton International Airport features a 20,000 square foot hangar and 80,000 square foot ramp. It has some of the most modern facilities including a heated hangar, helicopter handling, and medical/ambulance capabilities. Signature also has customs and immigration on-site making it much more convenient and efficient for private jet charter clients. The full list of amenities at Signature Flight Support include:

There is lots to see, do and buy in and around Edmonton International Airport. Here are some suggestions:

Castrol Raceway: A 320-acre facility that has several different kinds of motorsport events.

Century Mile Horseracing Track and Entertainment Centre: Scheduled to open in 2019, this is a one-mile horse racetrack and entertainment center next to the airport.

Costco Wholesale: A 154,000-square-foot warehouse store with just about anything and everything you need to buy.

Premium Outlet Collection Edmonton International Airport: This outlet mall, a four-minute drive from the airport has more than 100 brand name outlet stores in an enclosed building.

Red Cup Distillery: This distillery that makes authentic Albertan moonshine is located in an old aircraft hangar. Visitors can take a tour or just take some tastings.

Renaissance Edmonton Airport Hotel: This 4-Diamond Renaissance hotel is connected directly to the airport by a heated indoor walkway. It offers luxury accommodations and food.

And, leave your dog: Expected to open in the summer of 2019, Dogtopia will provide dog daycare, grooming and boarding right at the airport. Passengers will be able to drop off and pick up their pets when they leave and return. While away, pet owners can check on their dogs thanks to the high definition webcams that will be installed around the facility.

Dogtopias – there are about 80 of them now - have been around since 2002 but this will be the first one located right at an airport.

And, then, watch some sports: The NHL Edmonton Oilers and the WHL Edmonton Oil Kings play in Rogers Place, an arena that opened in 2016 as the home of the two hockey teams. The arena also is used for concerts and other events. It is about 18 miles north of the airport.