Charter a Private Jet to the Berlin Film Festival

Every February, nearly a half million people converge on Berlin to watch hundreds of the best films from around the world at the Berlin Film Festival.

Called the Berlinale, the festival, one of the most prestigious in Europe, was first held in West Berlin in 1951. It is considered one of the Big Three, along with Venice and Cannes. Since it began, the venue has changed, participants have changed – socialist countries started entering regularly in 1975 – and it has grown tremendously.

The competition – of films of every genre and length – is intended to show how international cinema has developed. There is an emphasis on European and American movies.

Some 20 films compete for top awards, including the Golden Bear for the best feature film and Silver Bears in numerous other categories.

You can expect to see, in addition to the movie stars and celebrities o the red carpet:

In addition to the screenings, there is a trade fair, the European Film Market, for those in the industry, including distributors, producers, and financiers; a week-long series of lectures and workshops for young filmmakers; panel discussions; and programs focused on looking at ways film and other arts interact.

If you’d like to come to Berlin to hang with other film-lovers, soak up the cosmopolitan cultural scene and, of course, see great films at the Berlin International Film Festival, Paramount Business Jets can arrange a flight for you into a nearby airport in Germany, including:

Booking early has many advantages. Enter a few details below to start planning your private jet flight to the Berlin Film Festival. 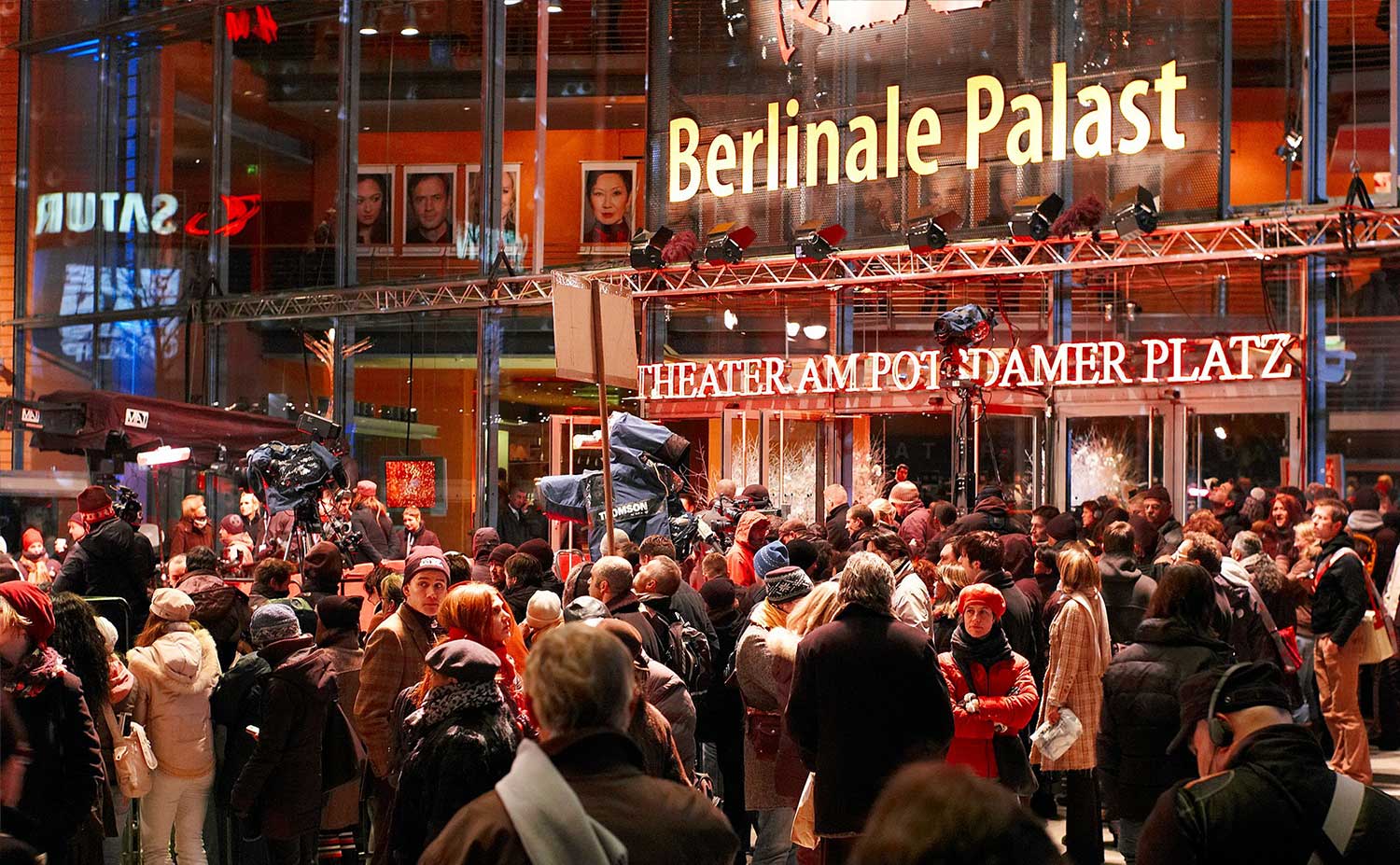 The Berlinale Palast during the Berlin Film Festival in 2007. Picture Source.

While you are in Berlin, there is much to see and do

Explore Grunewald forest. You can walk, bicycle or ride horseback through Berlin’s largest forest. There are several freshwater lakes in which to swim if it’s warm enough. You can also find Teufelsberg, the hill made by the Allies using rubble from the city after World War II.

Visit Museum Island. Five museums are located on the eastern end of Unter den Linden. They include the Neues, which houses the Egyptian bust of Nefertiti and the Pergamonmuseum, one of the world’s greatest archaeological museums.

Learn about the Berlin Wall. The city has changed immensely since the fall of the Berlin Wall in 1989. See what life was like when the city was split into East and West at the DDR Museum.

While most of the Wall has been demolished, a stretch along the southern border of Wedding and Mitte has been restored. You can also visit Checkpoint Charlie, which is now a tourist center with displays telling the Wall’s history.

And, the official Berlin Wall Memorial on Bernauer Strasse has a wealth of information about the Berlin Wall.

Explore the city’s Jewish history at the Jüdisches Museum, the Neue Synagogue and the Holocaust Memorial, the Denkmal für die Ermordeten Juden Europas. This memorial is made of 2,711 concrete blocks – representing the known Holocaust victims – arranged on an entire city block.

Then, when you’re done learning, party:

Dance all night. Hot spots for 24/7 partying include Berghain/Panorama Bar, a former factory on the border between Kreuzberg and Friedrichshain, where European techno is also playing; and Salon Zur Wilden Renate. Completely opposite of the cosmopolitan Berghain, the Renate feels like a big house party with several dance floors.

Or, check out the Clärchens where things are as hopping s when it opened in 1913.

Eat like a local. It’s not unusual to look around and see lots of commuters, students, and even tourists stuffing currywurst in their mouths. The famous street fare is made of pork sausage that has been sliced and covered with a mixture of ketchup and curry powder. Served with bread of fries, it’s a must-try favorite.

Have a German beer. Although there are spots to quaff all over, the best two places might be the Prater Garten, the oldest biergarten in Berlin, and the Café am Neuen See, which overlooks a lake in Tiergarten Park.