Charter a Private Jet to the Rose Bowl

The Rose Bowl, first played in 1902, was the game that began the tradition of New Year’s Day college bowl games.

Even though there are now more than 40 NCAA bowl games, the Rose Bowl remains among the elite six major bowl games in which the very best college teams compete.

If you heading to Pasadena, Calif., for the Rose Bowl Game and the Tournament of Roses Parade, Paramount Business Jets can arrange a charter flight for you into any of nearby airport, including:

Booking early has many advantages. Enter a few details below to start planning your private jet flight to the Rose Bowl.

About the Rose Bowl

Nicknamed “The Grandaddy of Them All,” the Rose Bowl was the first of all the bowl games.

While probably best known as a matchup between Big Ten and Pac-12 teams, its stature turned it into the bowl of champions somewhere along the line, and it deviated from its main mission to host many national championship games.

However, the structure of the playoffs changed in the 2014-2015 season when the college Bowl Championship Series (BCS) was changed to the College Football Playoffs.

The Rose Bowl will continue to be played on New Year’s Day (unless it falls on a Sunday, in which case, the game will be played on Jan. 2). It will host a playoff semi-final game every three years. In between, it will host games between Big Ten and Pac-12 teams.

The Rose Bowl Game, which, in 2016, has been played 102 times, set records and produced legends, such as:

The first Tournament of Roses football game, played at Tournament Park on Jan. 1, 1902, Stanford (Pac-12) was obliterated by Michigan (Big Ten), 49-0. The one-sidedness of the game prompted promoters to discontinue it the next year. In a rather bizarre move, it was replaced by Ben-Hur inspired chariot races. The good news is that the game returned in 1916. 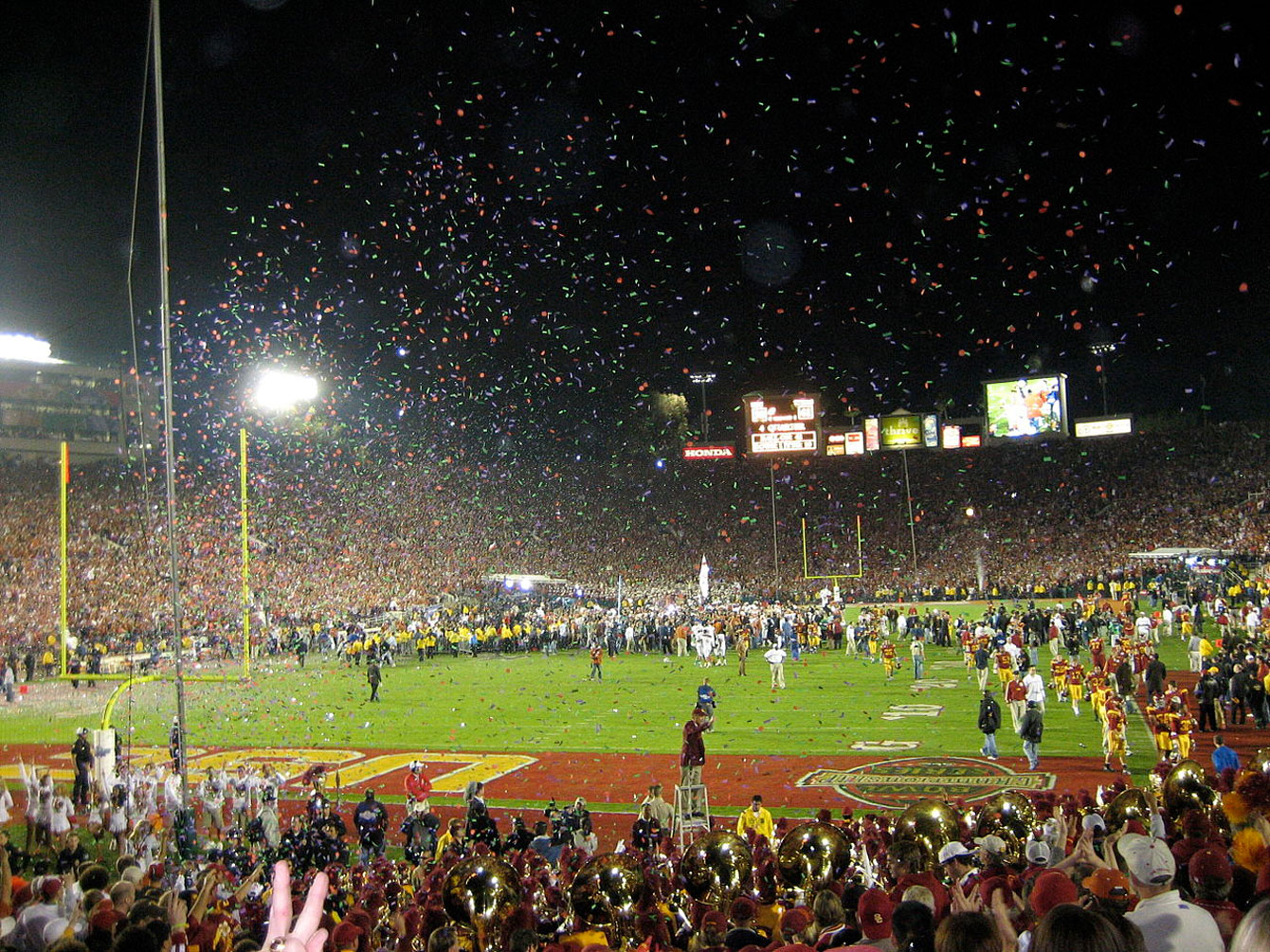 USC’s 34 appearances in the Rose Bowl makes it the school that has been there the most times. The University of Southern California won 25 of those games and lost nine.

Six other teams have had double-digit appearances in the Rose Bowl, they are:

In fact, the game was added to the Tournament of Roses event to make money to continue the parade.

The first parade was held on Jan. 1, 1890. The Valley Hunt Club started the event – a parade of flower-decorated horses and buggies. It was modeled after the Festival of Roses in Nice, France.

More than 2,000 gathered to watch that first parade, which was followed by an afternoon of competitions for young men – tug of war, foot races and a jousting game called the tourney of rings in which men on horseback tried to grab three hanging rings with a 12-foot spear.

Legend has it that the floral chariots and the tourney game gave the event the name, “Tournament of Roses.”

The parade, which enters its 128th year in 2017, follows a 5.5-mile route down Colorado Boulevard.

The Rose Bowl Parade is known for its fabulous floats, which, according to parade rules, must be entirely covered with flowers or other natural materials, such as leaves, seeds, or bark.

While that has never changed, the floats certainly have. Now, they are so elaborate, building for the next year’s parade starts as soon as the last one ends.

The Rose Bowl website explains how they are built:

A framework of steel and chicken wire is built upon specially designed chasses. The framework is then sprayed with a polyvinyl material that will be painted before the flowers and other natural pieces are applied.

In the week between Christmas and New Year’s, volunteers gather by the dozens in a mad frenzy to get everything glued onto the float by the parade. The most delicate flowers are kept in their own vials until they are to be glued on.

Each float, Rose Bowl officials say, is covered with more flowers than the average florist uses in five years. Making the floats move, using computer animation, has made them even more sophisticated.

There is usually a day – check tournamentofroses.com for details – when visitors are invited into the giant warehouse in which they are decorated to watch as the final seeds, bark, fruits, vegetables, grasses, and flowers are applied.

Tournament officials didn’t want the parade to interrupt church services by frightening horses that were tied outside churches. The tradition has remained ever since.