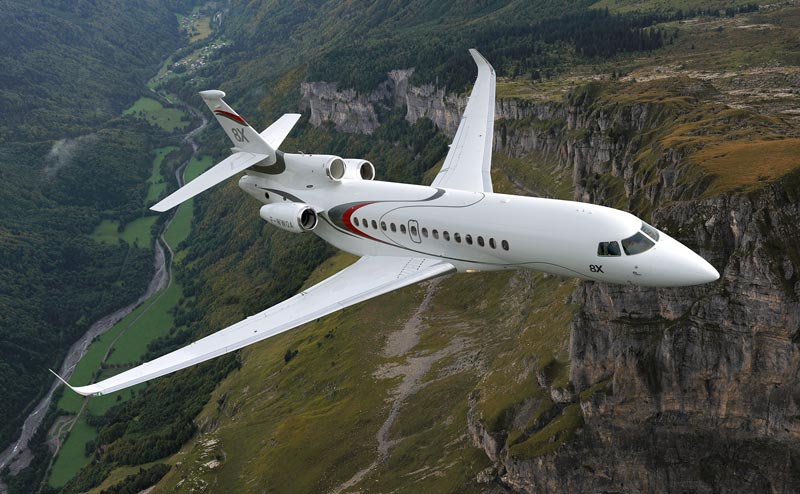 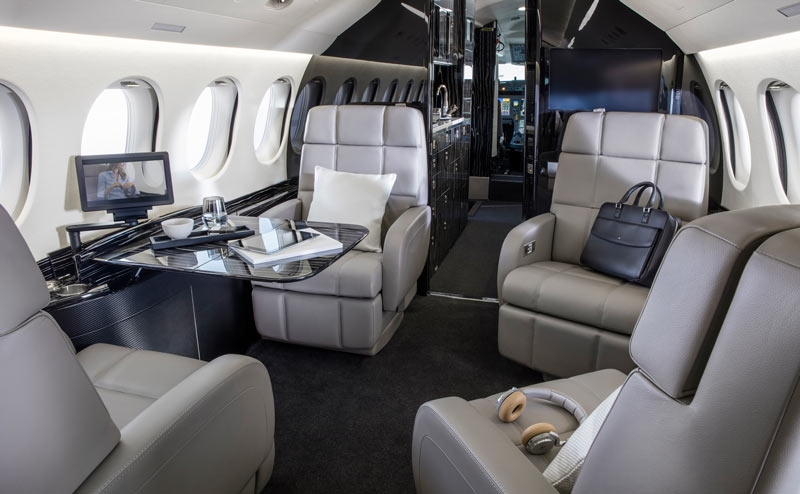 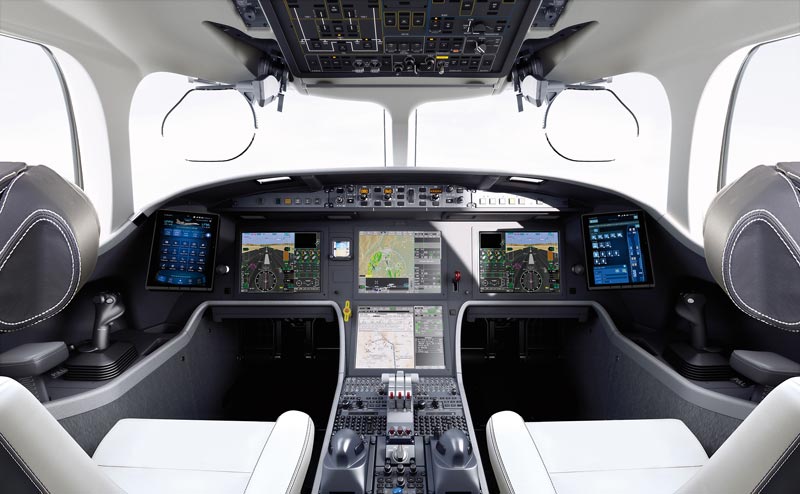 The average hourly rental rate of the Falcon 8X is around 11,750 USD per hour.

More about the Falcon 8X

They say a little goes a long way, and this is exactly what Dassault are banking on with the Flacon 8X. Building on the success of the 7X, the newer model looks to make a difference by adding just 43 inches of fuselage length – but how much does this really alter the experience?

The Falcon 7X was first introduced to the world back at the 2005 Paris Air Show and was an immediate hit. As one of only two trijets in production (along with the Falcon 900), the model not only looked to deliver something new to the public but also at a cheaper price than the usual. The Falcon 7X was close to $10 million cheaper than its competition when released and the price has remained fairly stable ever since.

Key Features of the Falcon 8X

In fact, the cabin has so much natural light pouring in that it was decided the overhead skylight which has been so fundamental to the Falcon 5X was now surplus to requirements.

The differences aren’t just noticeable for those with a sharp eye and a trusty tape measure. As soon as you step into the cabin of a Falcon 8X you’ll notice it is decidedly lighter than the 7X. This is due to the 16 windows which adorn the sides of the cabin, made possible thanks to the increased length of 80’3”. In fact, the cabin has so much natural light pouring in that it was decided the overhead skylight which has been so fundamental to the Falcon 5X was now surplus to requirements.

The little things have been taken care of too. New LED lights have customizable colors to alter the ambiance at will. A brand new HD entertainment system does justice to the latest films and music to make your journey that bit more enjoyable, and the seats themselves are more comfortable thanks to electrical assistance that lets you alter the position with ease. Cabin humidity has been bumped up by a solid 20%, and the design crew have clearly considered the appearance of the aircraft a lot; the cabin crew rest area can be converted into a closet when not needed, wrapping everything in the cabin into a neat little box.

Not everything’s different between the 7X and 8X. There is no change for the sake of change in the standard version of the aircraft; the cabin is still made up of three main seating sections and somewhere for the crew to set up camp, and many of the 7X’s popular amenities remain onboard. But customers who want their aircraft to be a bit more personalized will find their needs are met, with over 30 custom floor plans. Some of these are significantly different to the norm, with features such as an extra shower available.

An Interior Tour of the Falcon 8X Sky Suite

Capabilities of the Falcon 8X

The 8X is stretched to 42.6 ft. The aircraft has a range of 6,450 nm and routes such as New York to Dubai or Beijing to London can now be flown non-stop with more than ten people on board.

Given the extra fuselage, the newer and bigger 8X aircraft is of course, capable of carrying a slightly larger load. The new max take-off weight is 73,000 lb, representing a 3,000 lb increase on the 7X, whilst simultaneously the design team has managed to knock 600 lb off of the overall weight by adjusting the main wing and winglets. Despite having a reduced weight, the new winglets have an increased span of 86’3”. The three turbofans enjoy a 5% increase in take-off power, bringing the total up to 6,725 lb thrust.

Dassault seem to be delighted with their accomplishment, with their CEO claiming they have “broken new ground” in bringing the Falcon 8X to market, and very quickly:

“We’ve broken new ground with the 8X,” said Dassault Aviation Chairman and CEO Eric Trappier. “Not only did we meet customer demand for an aircraft combining increased range and cabin volume with the technological prowess of the popular 7X, but we were able to get it to market fully mature and tested in a remarkably short period of time, and exactly within our production schedule.”

Many have remarked on the short space of time between the 8X and its predecessor going to market. Indeed, delays in the aviation industry come with the territory and new models are rarely rushed, leading some to speculate that corners may have been cut in the process. But this does not appear to be the case. Customers certainly seem happy with the 8X. The first recipient of the aircraft, Amjet Executive Abakar Manany, couldn’t speak highly enough about it:

“As a pilot, I can personally vouch for the remarkable handling and piloting qualities of the big new trijet,” said Mr. Manany. “Its superb performance and cabin comfort will allow us to fill an ever-wider range of needs and missions for our exceptionally demanding clientele.”

The Falcon 7X was and is an immensely popular model and was always destined to be continued. The 8X does this exceptionally, borrowing all of the finest elements from its predecessor without being overly grandiose. Everything about the model shows a great deal of experience and thought, with small changes here and there culminating in an even more enjoyable experience when onboard.