Charter a Private Jet to the NCAA Hockey Championships

Most college sports fans have allegiance to one team or one school.

Ask them their favorite, and they’ll chime in with things such as “the Buckeyes” or “Notre Dame.”

That doesn’t seem to be the case with hockey. Those fans are fans of the game itself.

If you are one of those hockey fans, grab your game gear and let Paramount Business Jets arrange a charter flight for you into any city hosting the Frozen Fours, the NCAA tournaments – Division I and Division III in men’s and a combined tournament for women – that determine the top collegiate hockey teams.

In 2023, Paramount can arrange a charter flight for you into any airport near Tampa's Amelie Arena for the men’s Division I championship.

For the men’s Division III, Paramount can arrange a charter flight for you into any airport near Utica, N.Y., Memorial Auditorium.

And for the women’s Frozen Four, Paramount can arrange a flight for you into any airport near the Family Arena in St. Charles, Mo.

Booking early has many advantages. Enter a few details below to start planning your private jet flight to the NCAA Hockey Championships.

Each spring, at the end of the college hockey season, the top four teams in Division I – the Frozen Four – play two semi-final games and one championship game over three days.

Games are played before sellout crowds in NHL arenas in the cities that submit the winning bids.

The Frozen Four, which has been held since 1948, provides fans a chance to celebrate the sport of college hockey. Unlike other NCAA championships where the crowd consists mainly of fans of one team or the other, the Frozen Four draws fans of the game of hockey itself with many team jerseys representing many allegiances dotting the crowd.

There are 60 NCAA schools – 1,800 student-athletes – that are eligible to compete in the National Championship game. That includes 21 Division II and Division III schools that are allowed to "play up" to compete.

The road to the championship starts with 16 teams who compete in a single elimination tournament. That 16 consists of six conference champions and the best 10 other teams selected at-large.

At each of four regional game sites, four teams compete in the single-elimination Regional Semifinals. The two winners then compete against each other in the Regional Final.

The winner of each regional advances to the Frozen Four. 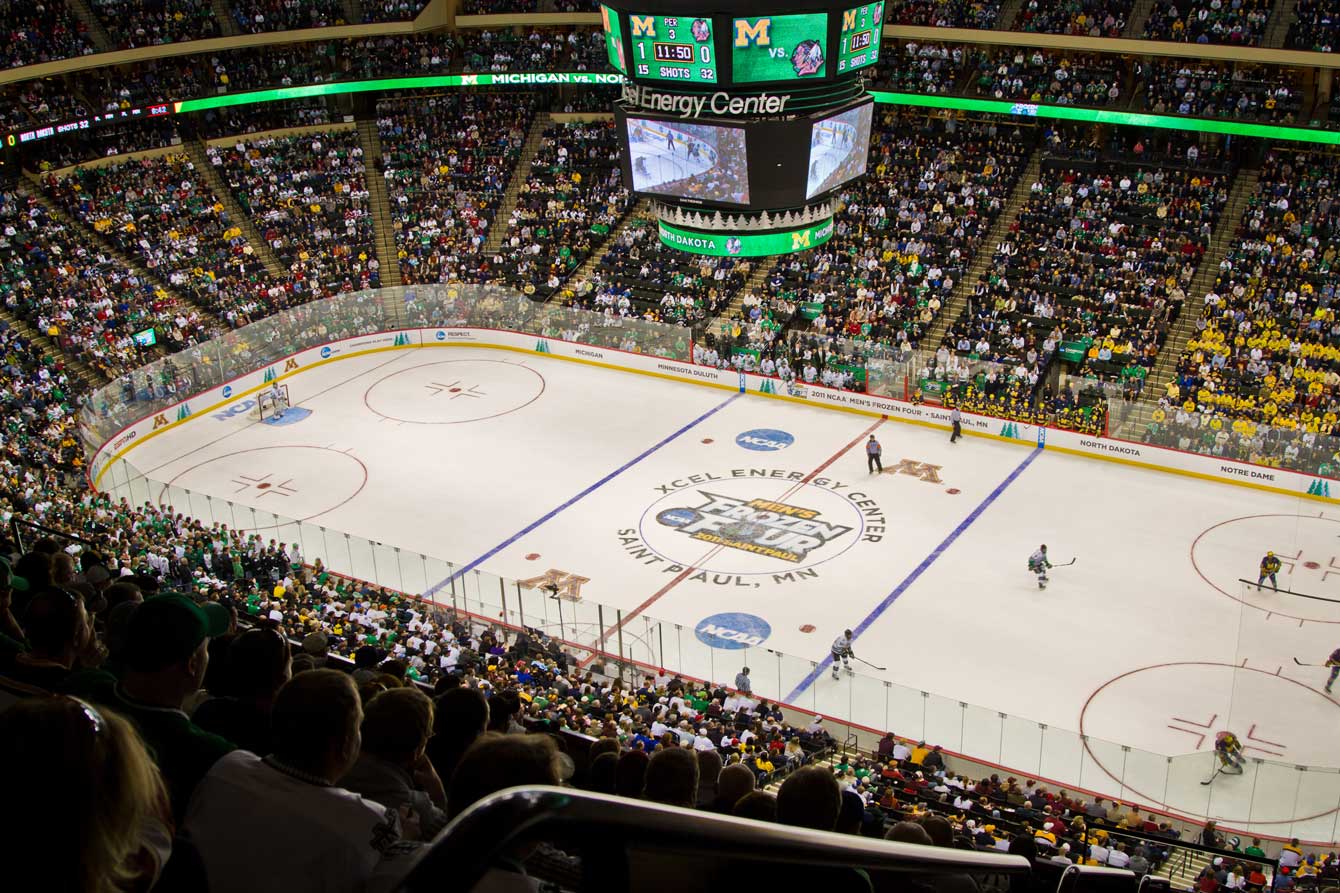 This year, the Frozen Four will be held April 6 (National Semifinal) and April 8 (National Championship) at the Amelie Arena in Tampa.

How game sites are chosen

It’s a long-involved process to be chosen as the site of one of the regional playoffs or the Frozen Four championship.

Cities must bid to host. The selection committee examines the submitted safety and security plans as well as things such as the wannabe site’s appropriateness in things from arena lighting to adequate hotel space for fans.

According to the bid specifications, “The NCAA will consider the ability of a site to provide a quality experience for the participants and fans and to conduct the championship and its accompanying events safely. In determining whether a proposed site can provide a quality experience, the NCAA will consider the site's ability to assure the benefits inherent in championship competition will be provided fairly to all participants and its ability to promote an atmosphere of respect for and sensitivity to the dignity of every person. The NCAA's focus will be on a quality championship experience for all involved.”

There are a couple interesting “need-not-applies,” too.

The NCAA will not accept bids from states where NCAA gambling is legal – Nevada – or in states where the Confederate flag is flown – South Carolina and Mississippi.

And, the host city has to give up the right to profit from the sales of game souvenirs.

“The NCAA retains the exclusive right to sell souvenir products at all rounds and sites.”

Although hockey-playing college men have more than a half century on their female counterparts, the top women’s team also compete in a Frozen Four championship.

Although several colleges – mostly Ivy League – have had women’s hockey teams since the mid-1960s – the first was at Brown University in 1965 – the NCAA Championship of Women's Ice Hockey didn’t start until 2001, a year after it was sanctioned by the NCAA.

Today, there are 35 schools from the Midwest to the East Coast that sponsor varsity women's hockey.