Charter a Private Jet to the Australian International Airshow

Amazing aerobatic daredevils. World War II aircraft. Military battle reenactments. Drones of every size and shape. Those are among the aviation wonders visitors to the biennial Australian International Airshow will see. Held 34 miles from Melbourne at the Avalon Airport in the Geelong Region of Victoria, it is the largest event of its kind in the Southern Hemisphere.

If you’d like to be among the 120,000 aircraft enthusiasts watching swarms of attack helicopters and marveling at the sound of the jet turbines as they simulate maneuvers, Paramount Business Jets can arrange a charter flight to get you to Avalon or any nearby airport, including:

Booking early has many advantages. Enter a few details below to start planning your private jet flight to the Australian International Airshow.

The show will feature the technology of the future, along with a special insight into space exploration.

You’ll be able to watch demonstrations and also talk to manufacturers and retail sales people in the exhibition hall. After checking out the drones, check out more technology of tomorrow in the Aerospace Showcase.

As the hosts themselves present on their website, the show will be the most dynamic pageant in Australia yet!

There is only one remaining Lockheed Hudson Bomber, and it will be on display at the airshow. Made in the U.S. for the British Royal Air Force shortly before World War II erupted, the Hudson destroyed a Japanese submarine with its under-wing rockets. Its reconnaissance and patrol missions included sinking and keeping at bay Nazi U-boats.

Also taking to the skies at the airshow will be an impeccably restored Lockheed Constellation. It is believed that only two of the hundreds of jets built in the 1950s for Howard Hugh’s Trans World Airlines remain. The planes were also used by Qantas on its “Kangaroo Route” to London.

The huge old military aircraft taking to the sky seem to be lumbering compared to the sleek jets that carry aerial acrobats in death-defying maneuvers. Among the performers will be the famous Oris Tinstix of Dynamite aerobatic team.

It will take your breath away to watch them; imagine what it feels like to pilot them. Ride along with pilot Skip Stewart to get a feel for what they feel. 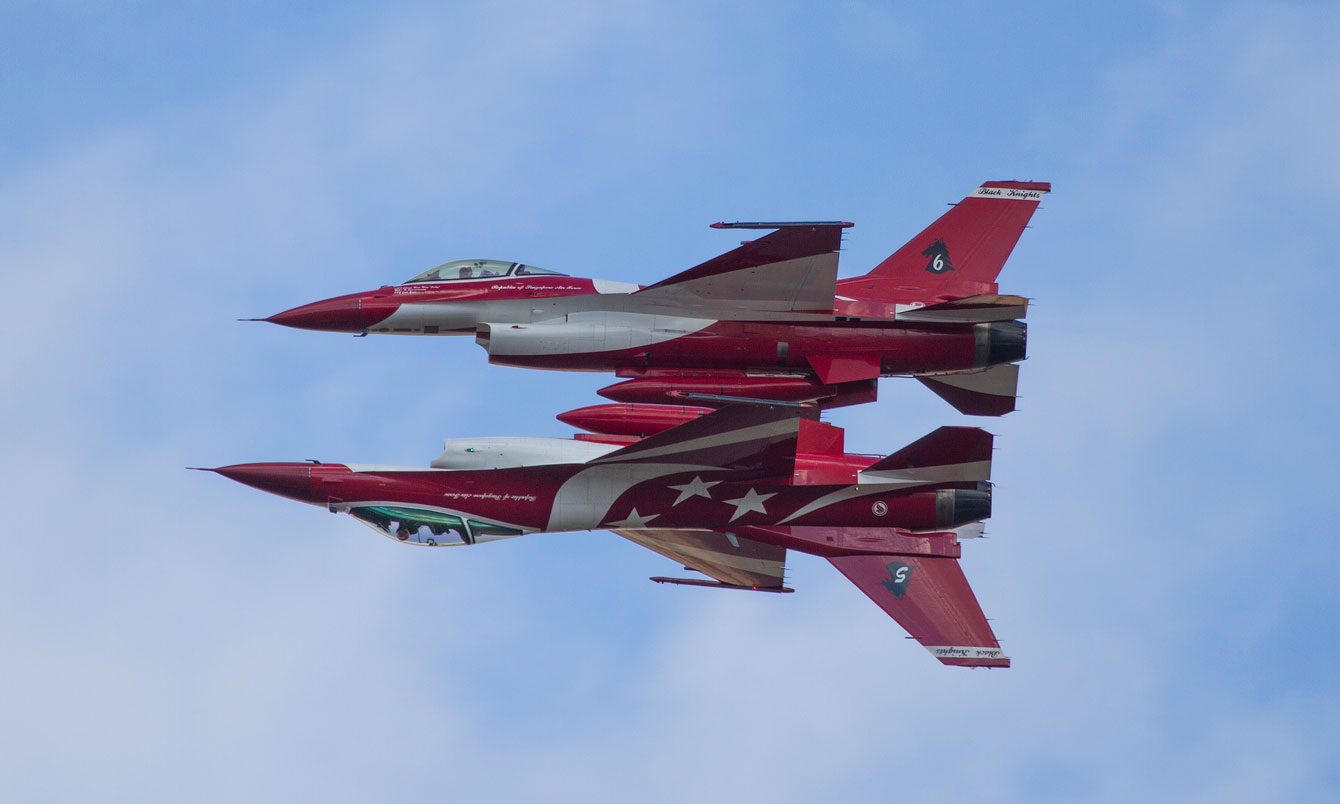 The star of the show may be the Tiger attack helicopter. The two-seat helicopter, faster and more agile than most helicopters, is one of the world’s most advanced armed reconnaissance helicopters.

And, one of the fan favorites at the show is not an aircraft at all but you still have to look up to see it. The Friday Night Alight makes the sky explode with fireworks, pyrotechnics and simulated rocket attacks. The Wall of Fire is something you will never forget.

Billing itself as a family event, the airshow gathers hundreds of the world’s leading aerospace innovators to display their latest and most exciting inventions. Whether you are a technology, science, military history or aviation enthusiast, there is something for you to see.

Military working dogs and their handlers will display the ways in which they prevent crime, provide security, detect intruders and respond in emergencies.

Members of the public can even volunteer at the airshow to foster puppies from the Air Force breeding program.

The Australian International Airshow and Aerospace & Defense Exposition will be held March 03 to March 05 at Avalon Airport Geelong.

Exhibitors and trade visitors are welcome the entire airshow. It is open to the public March 3-5.

When you are done gazing upward, take some time to look around the Bellarine Peninsula and the city of Geelong. You can: